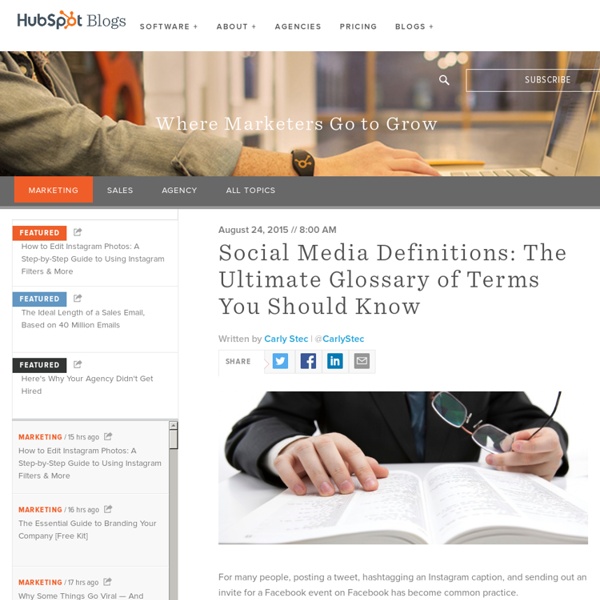 For many people, posting a tweet, hashtagging an Instagram caption, and sending out an invite for a Facebook event on Facebook has become common practice. (In fact, if you're highly experienced, you probably do all three at once.) But with new social media networks and innovative software cropping up almost daily, even seasoned social media users are bound to run into a term or acronym that leaves them thinking, "WTF?" Download our free social media guides here to help you get started with an effective social media strategy. For those head-scratching moments, we've created the ultimate glossary of social media marketing terms. Whether you're still hung up on the difference between a mention and a reply on Twitter or you just want to brush up on your social knowledge, check out the following roundup of social media terms to keep yourself in the know. 3) Algorithm - An algorithm is a set of formulas developed for a computer to perform a certain function. Related:  MayDay Reveue

Morning Becomes Eclectic Social Media's Slow Slog Into the Ivory Towers of Academia - Josh Sternberg - Technology Underpinning a disdain for social media in higher education is the assumption that incoming students have an inherent aptitude for new technologies "If you took a soldier from a thousand years ago and put them on a battlefield, they'd be dead," Howard Rheingold, a professor teaching virtual community and social media at Stanford University, told me one morning via Skype. "If you took a doctor from a thousand years ago and put them in a modern surgical theater, they would have no idea what to do. Take a professor from a thousand years ago and put them in a modern classroom, they would know where to stand and what to do." Terms like "digital native" and "digital immigrant" have been used by marketers as a way of differentiating generations. This tale is not new. But as social interactions and technologies mature, there has been a swing in the pendulum. Teaching Social Media Theory "As faculty, we're always trying to engage our students better," Smith-Robbins says. Image: Creative Commons.

5 Excellent Cloud Tools You Should Be Using It seems like everything is moving to the cloud from documents to photos to podcasts; plus more and more services are implementing cloud storage for security reasons. While 10 years ago you needed to have actual space on your computer or mobile device in order to save and access files, now you really don’t need much because free cloud storage is everywhere. Since there are so many new and useful cloud tools that are regularly popping up on the scene, I decided to share 5 that I feel are extremely beneficial to bloggers and social media users. Pogoplug Plain and simple, Pogoplug is “cloud storage for your mobile life”. Pogoplug is great for streaming music, movies and photos from your mobile device. ZeroPC ZeroPC is known as “your content navigator for the cloud”. ZeroPC has mobile apps for the iPad and Android and can run in Firefox, Chrome, Safari, and Internet Explorer. MakeTechEasier has a really great review on ZeroPC, if you’re interested in learning more. sideCLOUDload Mougg Flapcast

World Wide Words Maybe Media Bias Has Become a Dumb Debate, part one October 24, 2003 Maybe Media Bias Has Become a Dumb Debate, part one Denouncing bias in the media has become a dumb instrument. The cases keep coming. The charges keep flying. The only thing I ever saw that came close to Objective Journalism was a closed-circuit TV setup that watched shoplifters in the General Store at Woody Creek, Colorado. — Hunter S. Listen up, everyone engaged in the you’re biased style of press criticism. Hear this, those who, in civic-spirited fashion, have formed groups left and right, here and there to document bias in the press. This is for all the booming voices in the media heard complaining about bias in the media, as well as the smaller but no less committed voices, outside the media, complaining about bias (also called spin) inside the media— including the comments section of any number of posts at PressThink and probably a thousand other weblogs too, where arguments well known are even now being tapped out to harangue and provoke some other nonbeliever. 1.)

What does a digital strategist do all day? | Articles | Social Media When I started my career 12 years ago as a PR consultant in Melbourne, the most common question I was asked was: What do you do all day? It took me about six years to explain to my friends and family that a PR consultant's job mainly revolved around getting people to talk about brands and businesses in a way that encourages loyalty and recommendation. Or, to simplify it even further, getting talked about without “directly” paying for it. When my career took a turn six years ago to focus more on digital media as a way of interacting with consumers and stakeholders, I went through this education process all over again. So, to try to explain what digital strategists do every day, I've created (and borrowed) the following description and supporting charts. A digital strategist—explained Let's start by borrowing one of the best explanations I've read about digital strategist provided by Jon Crowley on his blog attention industry: “My focus is the consumer (commuter). Your answer ...

The Virtues of Video What if your struggling students could view demonstrations of difficult math concepts as often as necessary? Picture your students asking questions of an expert diver as she explores Australia's Great Barrier Reef. Or imagine a motivated student in a remote location attending an advanced placement physics class without leaving home. Providing such enriching learning activities, even with limited funds, is no fantasy; it's possible through live, interactive video. Much of what we define as education can now take place anywhere, anytime—and much of it can be acquired free through resources available over the Internet. Videoconferencing: Engaging Millenials As early as the 1980s, students in rural areas of Alaska, Washington, Texas, and Oregon connected to teachers through interactive videoconferencing. Interactive videoconferencing is often a good solution for resource-strapped school districts that can't afford to hire more teachers. When learners are engaged, retention occurs. References

Online Etymology Dictionary Maybe Media Bias Has Become a Dumb Debate, part two The People Formerly Known as the Audience: "You don't own the eyeballs. You don't own the press, which is now divided into pro and amateur zones. You don't control production on the new platform, which isn't one-way. There's a new balance of power between you and us." More... Migration Point for the Press Tribe: "Like reluctant migrants everywhere, the people in the news tribe have to decide what to take with them. Bloggers vs. "Where's the Business Model for News, People?" National Explainer: A Job for Journalists on the Demand Side of News This American Life's great mortgage crisis explainer, The Giant Pool of Money, suggests that "information" and "explanation" ought to be reversed in our order of thought. The Beast Without a Brain: Why Horse Race Journalism Works for Journalists and Fails Us. Twilight of the Curmudgeon Class: "We’re at the twilight of the curmudgeon class in newsrooms and J-schools. A Most Useful Definition of Citizen Journalism "It's mine, but it should be yours.

5 emerging PR trends—and the skills they require Good news! The advent of social media and the ever-increasing role of digital media in our lives means there are a number of opportunities for public relations. There are new ways to find audiences, new media through which to convey messages, tons of opportunities to connect with your brand’s fans, and so on. Best of all, digital campaigns can be measured. However, there seems to be some disagreement about the skill set PR pros need to succeed in today’s environment, and there are three points of view emerging: • The traditionalist, who values the ability to write, build relationships, isolate and convey key messages and build publicity strategy above all else Let’s look at the trends in the PR business to help determine which skills we really need: 1. There’s a difference between writing well and telling a story, and a good story is valuable currency today. Required skills: Curation. 2. Skills: Data analysis and advanced spreadsheet. 3. Skills: Visual thinking. 4. Skills: Social listening.

6 Ways Digital Learning is Changing Teaching Email Share December 1, 2011 - by Tom Vander Ark 0 Email Share I visited Wireless Generation , a leading education technology company, in Brooklyn this week. As someone who has, within the last decade, been a student and a teacher, as well as administrative support, I was very interested by the parts in your book when you made it clear that educational institutions are evolving. There will be a half a dozen significant changes in teaching in this decade. Model differentiation will proliferate over the next decade as school developers invent new ways to blend online and onsite experience around competency-based pathways. The second profound change underway is the shift from the individual practitioner to more collaborative and team based teaching. A third and related point is that staffing models will be more differentiated with specific roles and different levels. Four, we’re seeing a general shift from didactic instruction to more interactive learning experiences.