How To Customize Google+ 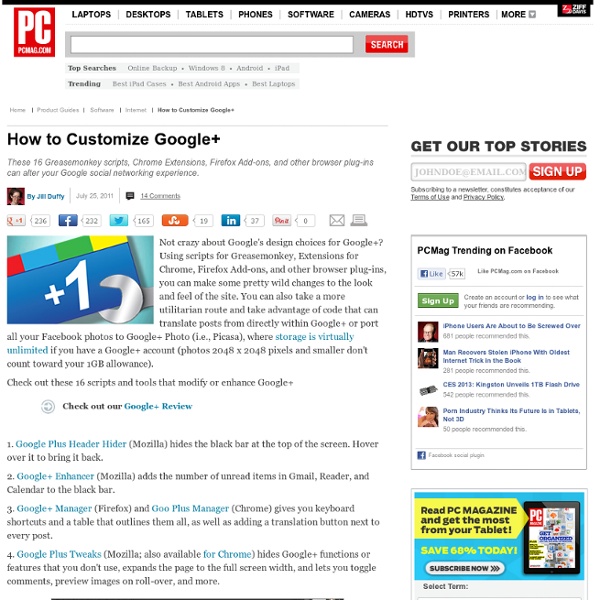 Not crazy about Google's design choices for Google+? Using scripts for Greasemonkey, Extensions for Chrome, Firefox Add-ons, and other browser plug-ins, you can make some pretty wild changes to the look and feel of the site. You can also take a more utilitarian route and take advantage of code that can translate posts from directly within Google+ or port all your Facebook photos to Google+ Photo (i.e., Picasa), where storage is virtually unlimited if you have a Google+ account (photos 2048 x 2048 pixels and smaller don't count toward your 1GB allowance). Check out these 16 scripts and tools that modify or enhance Google+ 1. Google Plus Header Hider (Mozilla) hides the black bar at the top of the screen. 2. 3. 4. 5. 6. 7. 8. 9. 10. 12. 13. The toolbar offers plenty of useful functionality, but unlike Mary's little lamb it simply doesn't follow us everywhere we go. 14. 15.

30 Trends In Education Technology For 2015 30 Trends In Education Technology For The 2015 School Year by Terry Heick What’s trending up for 2015 school year in terms of education technology? iPads are still the standard but other platforms are making headway. That should be fun to watch over the next 3-5 years. How To Hack Google Plus For SEO Value People tend to think of Google Plus as just another social network, built as Google’s challenge to Facebook’s incredible growth over the past decade. What most people don’t realize, however, is the SEO value that makes Google+ so much more than just a social networking platform. How so? Studies show a powerful correlation between search rankings and the number of Google +1's received by a URL. Searchmetrics found Google +1's to be the most highly correlated factor to search result rankings, and Moz's 2013 scientific correlation study placed Page Authority just above +1's at the top of all correlation factors. It's probably not a surprise that activity on Google's social network influences Google search results, but the degree of correlation is astonishingly high.

Managing Your Social Graph - Google+ [Google Plus] With Google+ almost two weeks into its test phase, conversation about this new social network service seems to be going in circles. Literally. That’s because Circles is the Google+ feature that users are generating the most buzz about. It’s Google’s answer to the problem of organizing your social graph online. If you’re not familiar with a social graph it’s a map of everyone you know and how they are related to you. Social graphs are tricky; as you try to define them you’ll inevitably run into some complications. 40 Google Plus Tips for Newbies Ok, so at this point, we are all newbies at Google Plus, right? At least if you got in recently via a Google Plus invite. At this point I’ve spent a decent amount of time with it and have concluded that Google has finally made a positive mark in social networking. It’s still early, but there is a lot of excitement around Google+ by those who have jumped on early, and for good reason.

Using Technology to Connect Your Students to the World This is a contributed post from Billy Krakower, co-authored with Jerry Blumengarten. Connecting students in today’s fast-paced world is important, as students use their devices constantly, but need to find ways to do it educationally and responsibly. As educators, we need to expand our reach beyond our classroom walls. In 2012, I began participating in an activity called Mystery Skype with my Twitter friend, Nancy Carroll, in Massachusetts. This evolved into what we now call Mystery Location Calls. [Infographic] Google's 200 Ranking Factors There’s no doubt that Google’s algorithm is more complex — and volatile — than ever. The days where SEO was all about meta tags and backlinks is long gone. Google now uses at least 200 ranking factors in their algorithm, including social signals, user-interaction signals, and trust. If you’d like a bird’s eye view of these factors, then this infographic by Entrepreneur.com and Backlinko may give you some much needed perspective. The piece covers all of the known 200 ranking signals that Google uses to rank sites and pages. However, it’s important to note that many of these aren’t proven or official ranking signals.

40 Google+ Tips & Tricks For Power Users July 27, 2011, 8:24 AM — Google+ is all the rage right now. Even under its limited-invite "field trial" phase, the social sharing service is growing in leaps and bounds, with oodles of new users joining every day and even more champing at the bit to get in. Most of us, however, are only beginning to scratch the surface of what Google+ can do; like many Google products, G+ is brimming with advanced features and untapped tweaks. Google+ Scam Spreading Via Fake Invites [WARNING] Using Google+? Add Mashable to your circles. You'll get the latest about new Google+ features and tips and tricks for using the platform as well as top social media and technology news. Malicious hackers have targeted Google's social networking service, Google+, for the first time in a scam that involves fake invites to the service, Naked Security reports. The fake invites are spreading through email, and they look very similar to the actual invites to the service, down to the email address which seems to be coming from a Google+ member.

How To Use Evernote: The Unofficial Manual Table Of Contents §1–What Is Evernote? §2–An Overview Of The Desktop App edutopia Considering how ubiquitous smartphones and tablets have become, especially in high school and middle school, questions about managing use and educating students about digital etiquette are on a lot of educators' minds. This October, Common Sense Media is sponsoring Digital Citizenship Week from October 16 to October 22. And we wanted to pull together some of the best resources to help educators talk about digital responsibility and safety online. Here, you'll find resources that cover today's digital landscape, ideas for student activities, and strategies for engaging parents. There are plenty of valuable resources for educators and parents to share, but here are six of my favorites:

How-To Find Files In Unprotected Directories We’ve all got a little voyeurism in us. That’s a big reason why the post, Clearing Google Search History to Maintain Your Privacy sent my visitor counts off the charts :). In this article, I’m going to show you how to create search queries that will list the contents of unprotected directories on the internet.