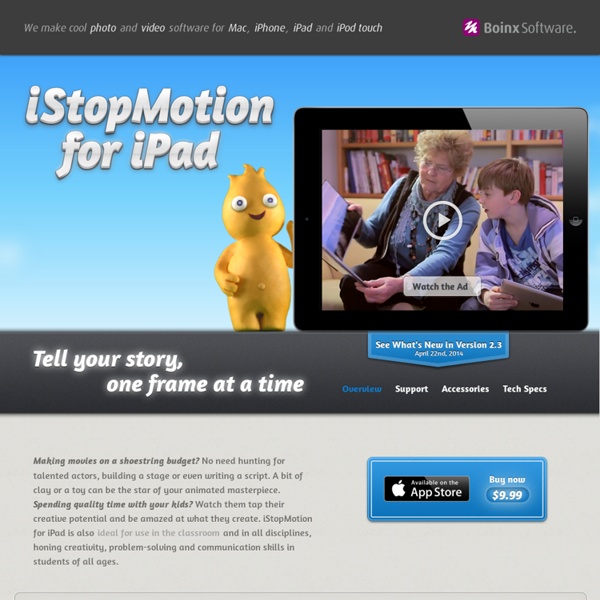 How to Use Green Screen Effects on iPads Making Movies Magical These days, very little comes out of Hollywood without special effects added in post-production. Our favorite superhero movies, science fiction thrillers and fast-paced action movies just wouldn't be the same without them. What You Need to Get Started There are a number of things you need in order to use green screen effects on iPads. An iPadA green screen cloth or roll of paper to use as your backgroundA green screen app like Green Screen by Do Ink. Additional items you might want to consider could include a sturdy tripod and an iPad frame like the Padcaster or Makayama Movie Mount to secure the iPad while shooting your video. Green Screen Shooting Tips In order for your green screen movie to look as good as it should, there are a few things you should endeavor to do when filming your footage. Use a good quality green screen that has a consistent color. An Introduction to Green Screen by Do Ink The app's interface, as you can see below, is very straightforward.

Stop Motion Software & Tools :: Review Overview of Stop Motion Software & Tools * UPDATE - It is realized that this page has not been updated in awhile. Some of the programs may no longer be available. Would like to update this resource page. If you find programs are not available, you may contact me which would help in updating this resource listing. 10-28-13 BRIEF HISTORY: "Movie Film" was the most common image storage medium to permanently record & preserve your animation (film still used). movements, and impossible to see your previous animated movements (as you were animating). The following are not detailed reviews of the of the Stop Motion capturing/recording software-tools, but more of my general comments and I am not going to be too critical. Instead of asking, "Which is the best program?" Okay, here goes .... happy shopping ....... DragonFrame has rapidly gained recognition as a serious tool for professional Stop Motion production work. Motionists. Stop MotionMaker for PC-Windows. This one looks like VirtualDub .

Press Play — Press Play More info: Grading 30% final project30% collaboration, based on assessment of your notes on others’ work20% class participation and demonstrated familiarity with the assigned reading20% smaller assignments I grade based on where you start and where you end. Don’t work on me for a better grade—work on your work and making the work of those around you better. Show industriousness and seriousness and produce surpassing work if you want an exceptional grade. Personal Standards Don’t raise your hand in class. This is an intense, once-a-week immersion on the waterfront of modern media-making. If you text or email during class, I will ignore you as you ignore me. I expect you to behave as an adult and will treat you like one. Excuses: Don’t make them — they won’t work. If you truly have a personal or family emergency, your welfare comes first. If you are having trouble understanding expectations or assignments or instruction, please speak up. Academic Standards This is a web-based course. Readings

amazon AnimatorHD - Stop Motion and Time Lapse Software ANIMATORDV SIMPLE+ FREE FOR ANY USE SUPPORT FOR VIDEO DEVICES ONLY (DV, USB CAPTURE, ViVo, WEBCAMS) DIGITAL STILL CAMERAS SUPPORT IS AVAILABLE IN THE ANIMATORHD Download link: Here is Serial Number S/N: (just copy/paste at first run) AnimatorDV Simple+ On-line Video Tutorials AnimatorDV Simple+ Quick Start (PDF) AnimatorDV Manual 9.x (incl. Please send your opinions, suggestions. AnimatorHD Forum - join now My antivirus software says that AnimatorDV is infected. This is false-positive. In Windows7 32 bits after exiting AnimatorDV Simple+ I cannot run it again. You have to manually kill the "AnimatorDV.exe" process in the Task Manager, Then you can run it again. Is AnimatorDV Simple compatible with Windows Vista as I'm having problems running it after installing it. when I attempt to run it I get this message: "AnmatorDV.dll reading error" I'm having trouble running the program in the Login User also. AnimatorDV is tested on Xp/Vista/W7 system. Please try this: 1. or 1.

5-Minute Film Festival: Resources for Filmmaking in the Classroom I'll admit I'm a bit biased here since I'm a filmmaker by trade, but I truly believe the process of planning and making videos can offer tremendous learning opportunities for students of almost any age. Not only is the idea of telling stories with video really engaging for many kids, filmmaking is ripe with opportunities to connect to almost every academic subject area. As the technology to shoot and edit films becomes more ubiquitous, where is a teacher with no experience in video production to begin? I've shared some resources below to help you and your students get started on making blockbusters of your own. Video Playlist: Student Filmmaking 101 Watch the player below to see the whole playlist, or view it on YouTube. 10 Tips for Beginner Filmmakers (10:37) Young filmmaker Simon Cade's channel, DSLRGuide, is one of the most popular for filmmaking tutorials. More Resources on Student Filmmaking

Testing Stop Motion Software for PCs | GeekDad If you’ve got a Mac, making stop motion movies with your kids is a no-brainer: iStopMotion is great. But if you’ve got a PC, the choice is harder. There are lots of programs available, but each has drawbacks, and getting cameras to work properly is a huge headache. I tested two programs: The PC leader, StopMotionPro ($70 for Junior version), and a simpler program called StopMotionMaker ($58). StopMotionPro is by far the more polished software and looks quite easy to use. Unfortunately, I couldn’t get it to work with any camera we have, from a Canon Digital Rebel DSLR to a Sanyo HD camcorder to Canon point-and-shoot digicams to even a webcam. We tested it on both Vista and XP, and updated all the drivers for each camera we tried. StopMotionMaker is just the opposite. StopMotionMaker has most of the essentials, such as "onionskinning" (you can see a ghost of the preview frame so you know how much to move your models), various frame-per-second recording speeds and AVI output.

10 Simple Edits That'll Instantly Improve Any Piece of Writing Editing copy boils down to two key things: recognizing weaknesses and knowing how to fix them. It’s a critical part of the writing process and yet, one that’s all too often overlooked. After all, if you don’t know that there’s an issue to begin with, how can you fix it? That's why, if you struggle with editing, you’re going to love this article ... Because by the end of it, you’ll be armed with 10 powerful, uber-specific editing actions that’ll make your copy more addictive, engaging, and compelling than it was before you got to work revising it. Namely, these edits will make them more likely to do what you want them to do -- and that’s what great copy is all about. 10 Simple Edits That'll Instantly Improve Any Piece of Writing A mesmerized reader, for all intents and purposes, is an engaged prospect -- and that’s exactly what marketers want. Are you ready to edit your copy like a pro? 1) Open with questions that get the reader to say “yes.” 3) Bold your key benefits. Why? Feeling Prepared?

ipadschule FREE stop motion software for windows? | BrickFilms StampMotionProductions I recently got a new HD webcam, and the stop motion software I’m using doesn’t support HD..So I have been trying to find good Free stop motion software, and Monkey Jam is not what I want it doesn’t have Onion Skinning. here is a list of program I’ve already found and I don’t want (at least one thing is wrong with each free stop motion program I get) Monkey Jam, Stop Motion Animator (its stupid because you have to keep onion skin doesn’t stay on) Helium Frog Animator, (it’s just glitchy and slow at taking frames)and AnimatorDV Simple. could anyone recommend a FREE stop motion software? I don’t have the money at the moment to buy a program..the one I want is Stop Motion Pro (but it’s 295 dollars) it’s used my Aardman Animation Studios. Thanks! jahnocli You could try Stop Motion Recorder: sstrong Qik Photo Animator is available in a trial edition (or a few dollars if it’s useful to you). Galaxy Patrol BarudBrickFilms