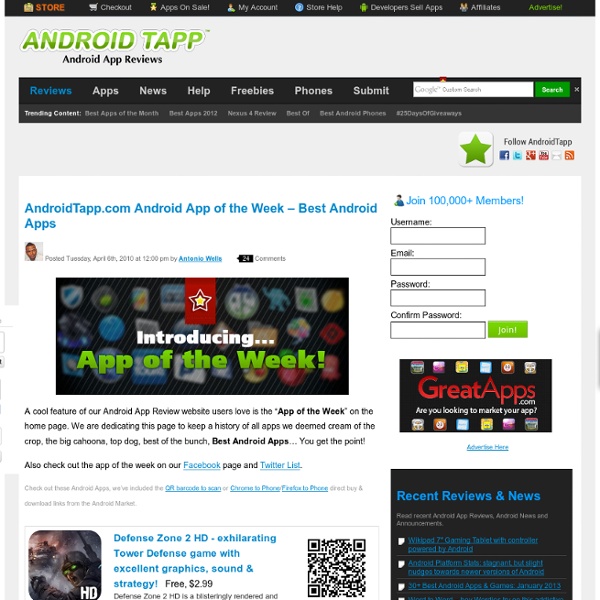 Top 8 Android Apps for Education Alright, time to put down the Angry Birds and put your Android to better use. Whether you're currently in school or just seeking a little self-improvement, a plethora of Android apps are just waiting to enhance your knowledge base, expand your skill sets, improve your memory and more. We've picked a few of the top applications in a number of categories, including math, music, geography, astronomy. Take a look at these apps, and in the comments, let us know which ones you already use to keep your most powerful organ in top shape. (And to all you teens trying to convince your parents that buying you an Android smartphone is a good idea, you're welcome.) Interested in more Android resources?

How to Get Better Battery Life from Your Android Phone "You don't need a task killer." I have a Sprint HTC Evo 4G, and Sprint's bloatware likes to start automatically on my phone and suck battery life. There is also no way to uninstall these apps unless I root my phone (which will happen very soon). Read my original article on task killers. While it may kill the bloatware (which you really should root and uninstall), it can cause all sorts of other problems. Bloatware is a huge problem, but task killers are not the solution. Great, so if I root because you said I should, are you going to cover the warranty that Sprint will tell me I've voided? In a few months the warranty will end and I'll have incentives to change phones. I'm not saying everyone has to root. You want Watchdog. I too have an EVO and I use Advanced Task Killer. I dont want NASCAR or Qik or any one of a dozen apps that I never use or use maybe once a week open all the time. WHAT REAL AND TANGIBLE PROBLEMS DO TASK KILLLERS CAUSE?! And don't tell me to root.

Getting Started With Android App Development: Eclipse and the Android SDK In recent articles we discussed the difference between web apps and native apps, and went through the steps required to set up your computer for Andcroid app development. In this article we will show you how to get the Eclipse IDE to run a sample app using the Android Emulator. We have already discussed the process of installing the Android SDK on your computer, as well as the Eclipse IDE and the ADT Plugin for Eclipse, which allows you to work with the Android SDK. Potential Android SDK Roadblock: Pathname If you've gotten this far and tried to run some of the sample applications, you may have noticed a few error messages, along with the fact that the Android emulator most definitely did NOT run. invalid command-line parameter: Files\Android\android-sdk\tools/emulator-arm.exe. The error messages refer to the fact that Eclipse couldn't find the Android SDK based on the pathname you entered when you installed Eclipse. dir /x 07/28/2011 04:34 PM <DIR> PROGRA~1 Program Files Conclusion

Dolphin Mobile Browser Gets Voice-Control Feature for Android Dolphin Browser for mobile devices received a voice-control feature on Wednesday for Android users, allowing them to search the Web with just their voices. The new feature — called Dolphin Sonar — allows you to open new tabs by speaking to the browser, and it can even search within sites. For example, saying "Facebook Justin Bieber" will display his Facebook profile. The speech recognition feature is available for free in the Android Market via the Dolphin for Android version 7.4 update. To activate the feature, tap the microphone icon at the bottom of the screen or shake the device, and start talking. “Our gesture-based browsing function was a game-changer in terms of the way people browse on their mobile devices, and Sonar is the logical next step,” said Yongzhi Yang, CEO of MoboTap, the makers of the Dolphin Browser. SEE ALSO: Dolphin Launches Gesture-Based Browser for the iPad Dolphin Sonar is not yet available for iOS devices. Have you tried the Dolphin browser?

12 stunning Icon Packs for Android Phones Uploaded By@nicque Uploaded By@ratikant9 Uploaded By@sevimlibrad Uploaded By@laostia Uploaded By@lolo Uploaded By@noahsarc Uploaded By@robjm Uploaded By@admin FreeTethering - Android Market Tether your Android phone to your PC over USB WITHOUT rooting! Klink only needs a data plan and works without a tethering option. NOTE: Please try the free demo version ("Klink Demo" on the market) to test compatibility before buying. - Does NOT require rooting - One-time purchase fee -- upgrades are free via the Market. - Uses USB for longer battery life and greater speed - Supports Windows (XP/Vista/7/32-bit/64-bit), Mac OS X 10.5 (or later), and Ubuntu/Linux (32-bit and 64-bit) - Written in C (NOT Java) for efficiency, speed, and lower power consumption. * Handles hundreds of simultaneous connections. - Can transparently rewrite "User-Agent" headers so that your PC browser will look like a mobile device when browsing web pages. - Designed so that network traffic effectively originates from the phone. After installing and running Klink, please tap "Set up your Computer" and follow the instructions. Keep in mind that Klink's consumption of data depends on usage.