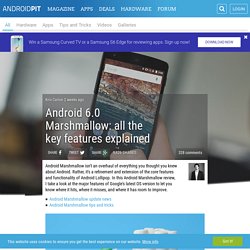 Instead I'll look at the major areas of the new OS, whether they are new, improved or missing in action. I'll break the review down into: the visual appearance of Android Marshmallow; integration of new Google products; core features of the system; security; and improvements to usability. Update: We've added more feedback on the fingerprint scanner and Nexus Imprint as well as further information on dark mode and Adaptable Storage Devices for microSD expansion. See the relevant sections below for more details. Jump to a section: Samsung Galaxy LEAK - Android Marshmallow UK launch date, new features. Android 6.0 Marshmallow is Google's best update yet. 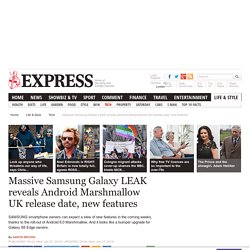 Unfortunately, Samsung smartphone owners have not had a chance to test it out. But that could be about to change. A leaked document from inside Samsung and published by Mobipicker reveals when Galaxy smartphone owners can expect the upgrade. The Galaxy S6, Galaxy S6 Edge and Galaxy S6 Edge+ are set to get the Android 6.0 upgrade in February or March, with the phablet set to receive the upgrade first. Samsung's Galaxy Note 5, which failed to materialise in the UK, is also slated for a February release.

Meanwhile, the South Korean firm's 2014 flagship smartphone – the Galaxy S5 – will also get the bump to Android 6.0 in March or April. This is around the same time as the Galaxy Note 4 and Galaxy Note Edge, according to the leaked documents from Mobipicker. Android M release date: when can I get it? Update: The Android Marshmallow update is out now for certain devices. 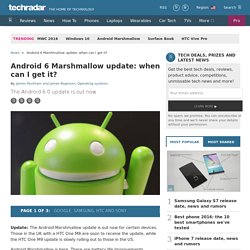 Those in the UK with a HTC One M8 are soon to receive the update, while the HTC One M9 update is slowly rolling out to those in the US. Android Marshmallow is here. There are battery life improvements, greater app permission controls, standardised support for fingerprint scanners, more granular volume controls, USB-C support and new Google Now features, all part of a mix that makes this an exciting upgrade for users. But is your phone actually going to get it? The release process for Android updates is more complicated than that for iOS updates, and just because an update has been launched that doesn't necessarily mean you'll have instant access to it. If you own a Nexus device you're in luck, as not surprisingly Google's new software has landed on those first – and manufacturers like Motorola are generally better at getting updates out quickly.

When your phone will get Android Marshmallow. Updated 1/21/16: Added information about the Marshmallow update for Verizon's LG G3. 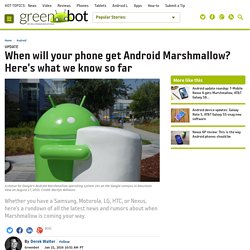 Android Marshmallow is here! Well, sort of. You see, Android updates are a tricky affair. Unless you have a Nexus device, where you get the updates directly from Google, it’s a bit of a slog before you can actually get the latest Android operating system on your phone. Android Marshmallow: 14 new AWESOME features. Google releases a slightly improved version of Android - but with Android Marshmallow, it’s pulled out all the stops. 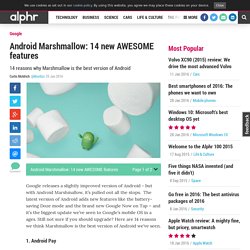 The latest version of Android adds new features like the battery-saving Doze mode and the brand new Google Now on Tap – and it’s the biggest update we’ve seen to Google’s mobile OS in a ages. Still not sure if you should upgrade? Here are 14 reasons we think Marshmallow is the best version of Android we’ve seen. 1. Android Pay Much like Apple Pay, Android Pay allows users to store credit and debit card information on their smartphones, and then wirelessly pay for goods and services quickly and securely. If you’re unlucky enough to lose your phone, Google has you covered. The only catch? 2. USB Type-C represents the holy grail of connections. As you’d expect, Android Marshmallow is futureproofed with built-in USB Type-C support, so as long as your smartphone has the connection, Marshmallow can take advantage of it. Slideshow: 9 Sweet Hidden Features Inside Android 6.0 Marshmallow. Google began rolling out updates to Android 6.0 Marshmallow a month ago, but chances are you don't have it on your device yet, unless you have a Nexus or just purchased a brand-new Android phone, like the HTC One A9. 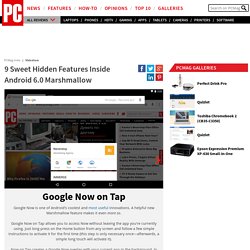 I received the upgrade for my Nexus 7 tablet. But usually the hold up with Android updates can be attributed to the messy patchwork of manufacturers and carriers making sure their particularly noxious stew of overlays and bloatware work well together. Let us turn to the positive and take a moment to acknowledge that we have a brand spanking new chapter of Android, which we'll all have at some point (unless we get so frustrated with Android's clusterfudge of an ecosystem that we switch to iOS or Firefox OS or something). To be honest, even if you don't have the opportunity to upgrade anytime soon, you won't be missing much. Check out the Characteristics of Android's Latest Version. Posted in - Mobile App Date - 02 Oct. 2015 Google announced its newest version of mobile operating system Android 6.0 – Marshmallow. 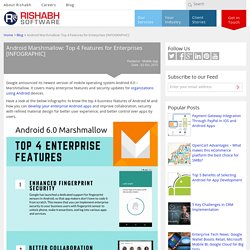 It covers many enterprise features and security updates for organizations using Android devices. Have a look at the below infographic to know the top 4 business features of Android M and how you can develop your enterprise Android apps and improve collaboration, security with refined material design for better user experience, and better control over apps by users. Want to share this Infographic on your blog or website? Here’s how: copy the below given code and paste the same into your website. Get in touch with us in case you encounter any issue.