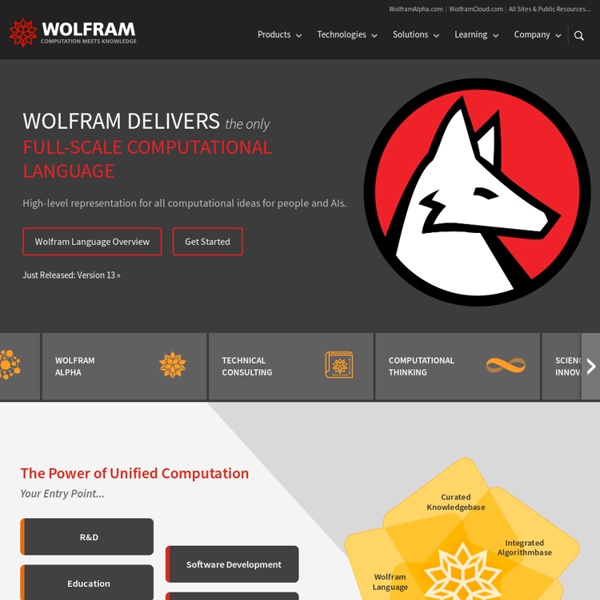 The Maths behind "NUMB3RS" LARRY (cont'd) At the request of the bride and groom, I will keep my remarks short and non-technical. As you know, there are four fundamental forces in physics: electromagnetism, strong nuclear interaction, weak nuclear interaction, and gravity. The liquid-drop model in nuclear physics was originally proposed by George Gamow and developed by Hans Bethe and Carl von Weizsäcker in the 1930s.

When You’re Innovating, Resist Looking for Solutions « HBR Blog Network – Harvard Business Review by Bart Barthelemy and Candace Dalmagne-Rouge | 12:29 PM September 13, 2013 If someone comes to you with a problem, you start thinking of a solution. That’s natural — everyone does it. But as soon as you start thinking of a solution, you unconsciously begin shutting off possibilities for getting a deeper understanding of the problem and therefore of finding a truly breakthrough solution. That’s why it can often be more productive to avoid “solutions” thinking when a problem arises. It’s better to stay in what we call the “problem space” for as long as possible.

Music in Plato’s Republic This extract is from The Republic by Plato, Book III (398-403). Then now, my friend, I said, that part of music or literary education which relates to the story or myth may be considered to be finished; for the matter and manner have both been discussed. I think so too, he said. Next in order will follow melody and song. That is obvious. Quintura - visual search engine Quintura - visual search engine Quintura - visual search engine for hotels ⚫ London hotels ⚫ Manchester hotels ⚫ Liverpool hotels Stephen Wolfram Stephen Wolfram (born 29 August 1959) is a British scientist,[7] known for his work in theoretical physics, as the chief designer of the Mathematica software application and the Wolfram Alpha answer engine, as well as the CEO of Wolfram Research, and the author of A New Kind of Science.[2][8][9][10][11][12][13] Background[edit] Wolfram's parents were Jewish refugees who emigrated from Germany to England in the 1930s.[5][14] Wolfram's father Hugo was a textile manufacturer and novelist (Into a Neutral Country) and his mother Sybil was a professor of philosophy at the University of Oxford.[15] He has a younger brother, Conrad Wolfram.[16] Wolfram is married to a mathematician and has four children.[17] Education[edit] Wolfram was educated at Eton College, but left prematurely in 1976.

Neuroscience: Helping employees through change Hilary Scarlett explains how the practice of neuroscience analysis can help leaders get underneath the physiological barriers to organizational change. Changing employee behavior is difficult. In fact, changing our own behavior is hard enough: it’s not easy to establish new habits such as taking more exercise, getting more sleep and eating less. 15 Effective Tools for Visual Knowledge Management Since I started my quest a few years ago searching for the ultimate knowledge management tool, I’ve discovered a number of interesting applications that help people efficiently organize information. There certainly is no shortage of solutions for this problem domain. Many tools exist that offer the ability to discover, save, organize, search, and retrieve information. However, I’ve noticed a trend in recent years, and some newer applications are focusing more on the visual representation and relationship of knowledge. I believe this is in part due to the wider adoption of mind mapping (and concept mapping), and leveraging concepts and advances in the semantic web community. Most traditional personal knowledge management (PKM) or personal information management (PIM) applications offer the same basic set of features:

List of academic databases and search engines - Wikipedia, the f the general list of search engines for all-purpose search engines that can be used for academic purposesbibliographic databases for information about databases giving bibliographic information about finding books and journal articles. Note that "free" or "subscription" can refer both to the availability of the database or of the journal articles included. This has been indicated as precisely as possible in the lists below. See also[edit] References[edit]

Stephen Wolfram, A New Kind of Science The Bactra Review: Occasional and eclectic book reviews by Cosma Shalizi 132 Wolfram Media, 2002 A Rare Blend of Monster Raving Egomania and Utter Batshit Insanity Attention conservation notice: Once, I was one of the authors of a paper on cellular automata. Lawyers for Wolfram Research Inc. threatened to sue me, my co-authors and our employer, because one of our citations referred to a certain mathematical proof, and they claimed the existence of this proof was a trade secret of Wolfram Research. I am sorry to say that our employer knuckled under, and so did we, and we replaced that version of the paper with another, without the offending citation.

Search Is No. 2 Online Activity Across All Age Groups: Pew Study Using search engines is the second most common online activity among all age groups, according to the new Generations 2010 report from the Pew Internet & American Life Project. E-mail is the most popular online activity among each age group. According to the Pew study, 87% of all US adults who use the Internet also use search engines. Pew gets more specific, too, reporting that 83% search for health information online — the third most popular online activity. A List Of Fallacious Arguments attacking the person instead of attacking his argument. For example, "Von Daniken's books about ancient astronauts are worthless because he is a convicted forger and embezzler." (Which is true, but that's not why they're worthless.) Another example is this syllogism, which alludes to Alan Turing's homosexuality: Turing thinks machines think. Turing lies with men.

Mocavo Raises $1 Million To Build Its Ancestry-Centric Search Engine Looking to fill in the blanks on your family tree? A startup called Mocavo might be just what you’re looking for. The service is setting out to become a search engine that’s highly optimized for ancestry-related purposes — type in the name of a relative, and it’ll do its best to surface content from the web’s troves of genealogy data, some of which has been difficult to search through before now. The startup, which was part of the TechStars Boulder program this past summer, has just raised a $1 million round from David Cohen (through Bullet Time Ventures), Dave McClure (500 Startups), David Bonderman, Walt Winshall, David Calone, Dave Carlson, Troy Henikoff, and other angels.

Stephen Wolfram Stephen Wolfram Born: 29-Aug-1959Birthplace: London, England Gender: MaleRace or Ethnicity: WhiteSexual orientation: StraightOccupation: Mathematician, Computer Programmer KMWorld 2016 Call For Speakers Hacking KM: People, Processes, & Technology Hacking and hackathons are perhaps better known in the geek community, but KMWorld 2016, is taking a page from their book and looking to hack, or change in our case, our ideas, strategies, and practices in using processes and technology to engage our communities. Organizations are changing – flattening their structures, encouraging creative and innovative practices, engaging audiences in different ways, utilizing technology to streamline and connect people in new and exciting ways. To be successful, today’s organizations have to look at things with different perspectives, be flexible and fast, able to easily transfer and share knowledge, deal with zettabytes of data, innovate, engage and impact communities and customers in positive ways. The platforms, processes and programs have to respond in a timely fashion to make this happen and to keep customers satisfied.