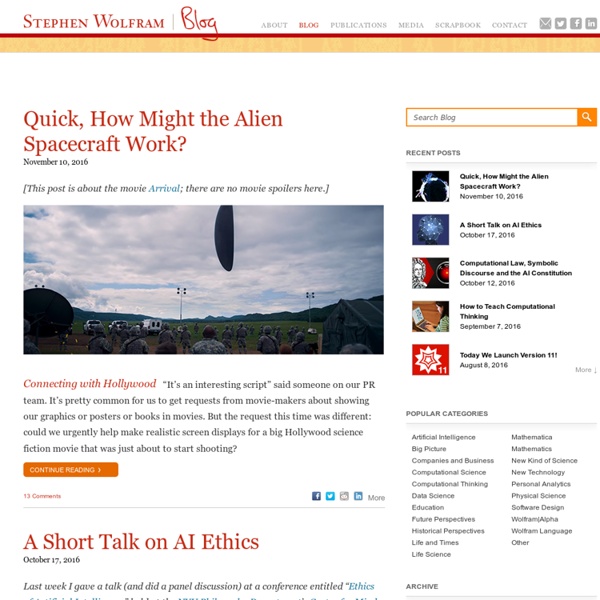 Two weeks ago I spoke at SXSW Interactive in Austin, TX. Here’s a slightly edited transcript (it’s the “speaker’s cut”, including some demos I had to abandon during the talk): Well, I’ve got a lot planned for this hour. Basically, I want to tell you a story that’s been unfolding for me for about the last 40 years, and that’s just coming to fruition in a really exciting way. And by just coming to fruition, I mean pretty much today. Because I’m planning to show you today a whole lot of technology that’s the result of that 40-year story—that I’ve never shown before, and that I think is going to be pretty important.

Project 2 Precedents « o estúdio [archiphilia] Project 2 Precedents Here are some images i thought I might scan in and post. EXTREME NATURE: Landscape of ambiguous spaces, Japanese Pavillion @ the Venice Biennale. A New Kind of Science A New Kind of Science is a best-selling,[1] controversial book by Stephen Wolfram, published in 2002. It contains an empirical and systematic study of computational systems such as cellular automata. Wolfram calls these systems simple programs and argues that the scientific philosophy and methods appropriate for the study of simple programs are relevant to other fields of science. Contents[edit] Computation and its implications[edit] The thesis of A New Kind of Science (NKS) is twofold: that the nature of computation must be explored experimentally, and that the results of these experiments have great relevance to understanding the natural world, which is assumed to be digital.

Stephen Wolfram, A New Kind of Science The Bactra Review: Occasional and eclectic book reviews by Cosma Shalizi 132 Wolfram Media, 2002 A Rare Blend of Monster Raving Egomania and Utter Batshit Insanity Attention conservation notice: Once, I was one of the authors of a paper on cellular automata. (Post)Modern Monuments: 20 Worthy Architectural Memorials (Post)Modern Monuments: 20 Worthy Architectural Memorials Article by Steph, filed under Public & Institutional in the Architecture category. Rich in symbolism and rife with meaning, these 20 abstract modern monuments and memorials radiate emotion and respect. Many architectural monuments like Daniel Libeskind’s addition to the Jewish Museum in Berlin and the new Pentagon Memorial in Virginia honor victims of genocide, terrorism and repression while others pay tribute to the United Nations, religious and historical figures, the military or simply to the transcendent power of peace. Jewish Deportation Memorial by Studio Kuadra, Italy

Stephen Wolfram Stephen Wolfram (born 29 August 1959) is a British scientist,[7] known for his work in theoretical physics, as the chief designer of the Mathematica software application and the Wolfram Alpha answer engine, as well as the CEO of Wolfram Research, and the author of A New Kind of Science.[2][8][9][10][11][12][13] Background[edit] Wolfram's parents were Jewish refugees who emigrated from Germany to England in the 1930s.[5][14] Wolfram's father Hugo was a textile manufacturer and novelist (Into a Neutral Country) and his mother Sybil was a professor of philosophy at the University of Oxford.[15] He has a younger brother, Conrad Wolfram.[16] Wolfram is married to a mathematician and has four children.[17]

Qatar Science & Technology Park, Doha by Woods Bagot All images, plans and information courtesy of Woods Bagot. Copyright by desMena. Woods Bagot’s new science park in Qatar looks to stimulate creativity and incubate knowledge among some of the country’s best and brightest scientific minds. From day one, the brief called for Oxford Science Park. It called for a network of typical 2-storey glass boxes that overlooked a series of car parks. In fact, the client cited the UK’s Stockley Park, Cambridge and Oxford Science Park as models from which the first concept designs of Qatar Science & Technology Park (QSTP) should be moulded.

Benoit Mandelbrot Benoît B. Mandelbrot[note 1][note 2] (20 November 1924 – 14 October 2010) was a Polish-born, French and American mathematician, noted for developing a "theory of roughness" in nature and the field of fractal geometry to help prove it, which included coining the word "fractal". He later discovered the Mandelbrot set of intricate, never-ending fractal shapes, named in his honor.[7] Alpha to See Dramatic Functionality Enhancements Posted by Most of our users are aware that we release a new version of Wolfram|Alpha every week. Each version includes countless changes—including regular data updates to hundreds of sources, improvements to our natural-language parser and other core frameworks, and completely new areas of coverage. This blog usually focuses on new datasets and functionality, and if you’ve been reading it recently, you know we’ve made some huge additions in just the last couple of months.

Europe 2009 – April 23: Southern Finland tour – Paimio Sanatorium 1 Our first stop was the Paimio Sanatorium, one of Aalto's early and quite well-known projects; it was a tuberculosis sanatorium, sited purposely out in the wilderness, and it was completed in 1932. Toward the front entrance, the spreading wings in view to each side. The cafeteria/library wing. Whimsical canopy is whimsical. Lots of curves. Wolfram Research Coordinates: Wolfram Research is a private company that makes computation software. The founder and CEO of Wolfram Research is Stephen Wolfram, an English scientist and author, who maintains close involvement with the development of Mathematica. The primary software product of Wolfram Research is the program Mathematica, an environment for technical computing, which has, as of January 2013, undergone an upgrade to version 9.01. Other products include Wolfram SystemModeler, Wolfram Workbench, Mathematica Link for Excel,[1] gridMathematica, Wolfram Finance Platform and webMathematica. The company launched Wolfram Alpha, an answer engine on 16 May 2009.