The Libri of Aleister Crowley 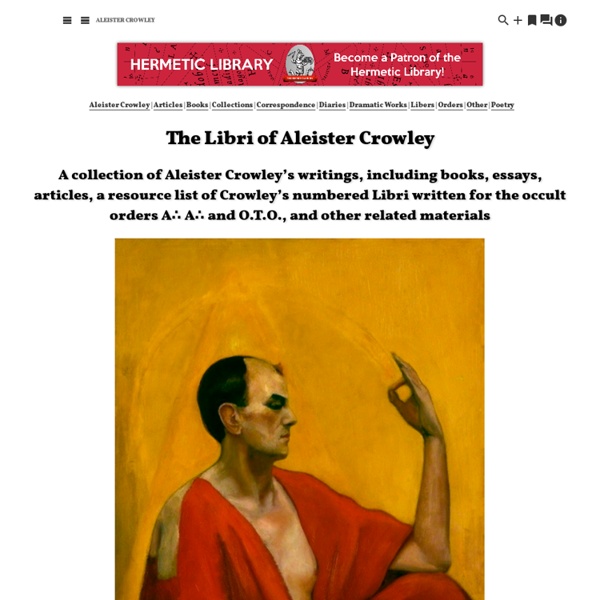 Aleister Crowley (Oct. 12, 1875–Dec. 1, 1947) – however one judges him – was a fascinating man who lived an amazing life. He is best known as being an infamous occultist and the scribe of The Book of the Law, which introduced Thelema to the world. Crowley was an influential member in several occult organizations, including the Golden Dawn, the A∴A∴, and Ordo Templi Orientis. He was a prolific writer and poet, a world traveler, mountaineer, chess master, artist, yogi, social provocateur, drug addict and sexual libertine. The press loved to demonize him and dubbed Crowley “The wickedest man in the world.” — From “Aleister Crowley” on Thelemapedia See also: Θέλημα – Thelema There are so many documents on the site related to the Thelema of Aleister Crowley that it can sometimes be difficult to know where to start, so here are a few first steps Centres of Pestilence Commentaries on Liber AL vel Legis, The Book of the Law, by various authors Aleister Crowley Books Aleister Crowley books at Amazon Related:  Luciferian/Satanic • Spiritual Anarchy

Gnostic Teachings - Gnosis - Ancient Knowledge for a Better Life Enochian Dictionary NOTE: This document is formatted to be viewed in 10-point Courier type. Landscape orientation is suggested for printouts. ENOCHIAN DICTIONARY Compiled by Benjamin Rowe, 1982-1998 ----------------------------------------------------- 1. Location/Source codes used in this list: Numerical -- From the Enochian Calls, as listed in Geoffrey James' The Enochian Evocation of Dr. Scary Paranormal Stories Official Church of Satan Website Internet Sacred Text Archive Home V-Library - Veritas The V-Library (Veritas Library) is an online collection of e-books by various authorities in the field of metaphysics and the occult. All the e-books are free for use and are public domain resources. "The idea for this came to me when seeing the Bob Hendricks Memorial CM Library on OccultForums and after seeing the Sacred Magick website fall victim to bandwidth strangulation. I figured veritas could use a Library for each of its varied subjects. A post will be made in Psionics, Body Energy Arts, Magick and Spirituality after I find enough files to make a decent post. Many thanks go out to Adept for compiling the initial list of e-books and any other members not mentioned who helped to edit and organize the copious amounts of e-books. Note: The e-books are alphabetized according to the last name of the author. Authors Abano, Peter de The Heptameron Acharya, Pt. Agrippa,Cornelius Aesop Akshay, Regulagedda Ambelain, Robert Ankerberg, Dr. Aristotle AsheJournal.com Bacon, Roger Bailey, Alice Confucius

Real Magick and Occult Archives undefined Welcome! I'm Amoris and I've created this space as a public service to those who might require the information found here. No permission is granted or implied for the public redistribution of this material in any form for any purpose whatsoever. Last update: August 27th, 2011 Wow this site is looking pretty dated. Search here for specific info within this website All information on this site copyright Amoris 1997-2006.

Ordo Templi Orientis History - Bill Heidrick Ordo Templi Orientis was founded before 1902 e.v. by Karl Kellner and Theodore Reuss (also known as Merlin) in Germany, with a principal mailing address in Lugano, Switzerland by 1917 e.v. The immediate precursor organization was the Hermetic Brotherhood of Light, a mystical society founded in the mid 19th century, with branches in Europe and North America. Prior to the Hermetic Brotherhood of Light, O.T.O. In the first two decades of operation, Ordo Templi Orientis absorbed elements of other fraternal and occult societies into its teachings and structure. Ordo Templi Orientis under Theodor Reuss, Outer Head of the Order (O.H.O.), was predominantly a Masonic organization, claiming ties with the Scottish Rite as its primary Masonic credential. Throughout the Reuss years (1902 e.v. to 1921 e.v.), membership in O.T.O. was a matter of record. Theodor Reuss became ill and resigned as Head of the O.T.O. in 1921 e.v., dying in the next year. During the period from 1962 e.v.

Grimoar - Occult Texts Welcome to our library Welcome in our occult texts library. It contains 2052 unrevised texts in pdf, doc and other formats. Librarians are responsible neither for text redaction nor for their contents. It is possible that some of the texts are still under copyright. If you would like to contribute to the library, use form below. If you would like to become administrator of this library, contact us on address mentioned above. Or you can switch to czech language version. Contribute to our library

Grimorium Verum (True Grimoire) (French with parallel English translation) Grimorium Verum (True Grimoire) Printed edition is now available. This digital edition and translation by Joseph H. Peterson, Copyright © 1999. All rights reserved. Large portions of the text were translated by A.E. NOTE: Complete text and drawings are included on our CD. The following notice is found in the copy in the British Library: This book was stolen in July 1972 and subsequently recovered by the police. Shelfmark: 8632.aa.5. Professional <a href=" Chat</a> from Envolve Freemasonry @ Aleister Crowley Texts An Excerpt on the Reconstituted O.T.O. from his Confessions What follows is Crowley's own account of his motivations and methods in reconstructing the O.T.O. and its rituals. It is excerpted from The Confessions of Aleister Crowley, pp. 700-n-704. "WHAT IS FREEMASONRY?" The question then arose, "What truths should be communicated and by what means promulgated?" Another essential point was to reduce the unwieldly mass of material to a compact and coherent system. The eighteenth-century Rosicrucians, so-called in Austria, had already endeavoured to unite the various branches of Continental freemasonry and its superstructures; in the nineteenth century, principally owing to the energy and ability of a wealthy iron master named Karl Kellner, a reconstruction and consolidation of traditional truth had been attempted. The O.H.O. put the rituals of this Order at my disposal. The main objects of the instruction were two. It chooses to enter into relations with the solar system. {...}