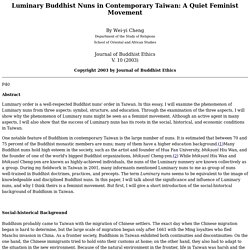 In this essay, I will examine the phenomenon of Luminary nuns from three aspects: symbol, structure, and education. Through the examination of the three aspects, I will show why the phenomenon of Luminary nuns might be seen as a feminist movement. Although an active agent in many aspects, I will also show that the success of Luminary nuns has its roots in the social, historical, and economic conditions in Taiwan. One notable feature of Buddhism in contemporary Taiwan is the large number of nuns. Social-historical Background Buddhism probably came to Taiwan with the migration of Chinese settlers. A 1919 survey by the Japanese colonial government noted the heavy presence of zhaijiao, or "vegetarian sect," in Taiwan.

Zhaijiao was a popular religion emerging around the early sixteenth century in the mainland China. Inspiration from Enlightened Nuns. The actual poems composed by the nuns exhibit a wide range in tone and subject matter. 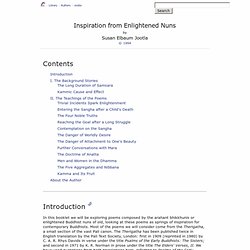 They were almost all spoken after the author had realized that rebirth and all its associated suffering had been brought to an end by the perfection of insight and total elimination of defilements. Dogen Zenji's Gender Inclusive Studies of the Way. Eshu Eihei Zenji Dogen Osho Shosan (Master Dogen's Informal Talks at Eiheiji Temple) Collected by Ejo, Attendant of Dogen Zenji & Others__ __ __ SHOSAN (Informal Meetings) #01 [The Suchness of Grasping and Letting Go] #02 [Dwelling Thoroughly in the Mountains] #03 [The Dynamic Relationship of Ancient & Present] #04 [Nine Times Nine in the Deep Snow] #05 [A Great Dojo] #06 [Our Temple is Great Awakening] #07 [A Complete Dharma Year] #08 [Ninety Days of Great Peace] #09 [The Meaning of the Green Pine] #10 [Informal Meeting at New Year's Eve] #11 [For the Love of Buddha's Lively Eyes] #12 [The Nectar within Forms and Rituals] #13 [Returning to the Source] #14 [The Solid Rock at the Gate] #15 [Transmitting the Jewels of Yaoshan's Words] #16 [Renewing Laughter] #17 [Clouds & Waters Meet Equally with Clouds & Waters] #18 [Kind Hearts in Deep Snow] #19 [Sitting Upright like Bamboo] Bamboo Mudra, Great Tree Zen Temple, Teijo Munnich, Abbess __ __ __ HOGO (Dharma Words) 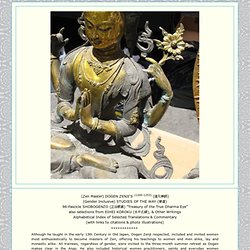 Women in Traditional China. By Patricia Ebrey In China from very early times, men have been seen as the core of the family. 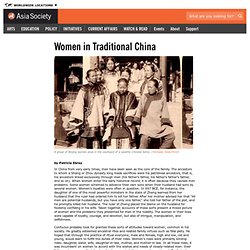 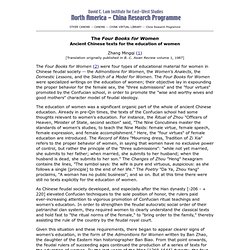 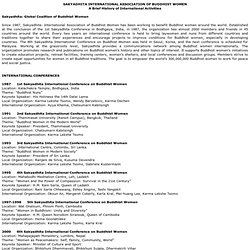 Established at the conclusion of the 1st Sakyadhita Conference in Bodhgaya, India, in 1987, the organization has almost 2000 members and friends in 45 countries around the world. Every two years an international conference is held to bring laywomen and nuns from different countries and traditions together to share their experiences and encourage projects to improve conditions for Buddhist women, especially in developing countries. 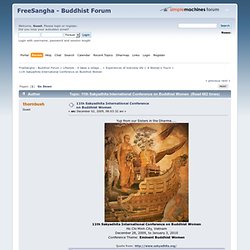 Temple tours in the vicinity of Ho Chi Minh City will be arranged on January 4 and 5. Optional tours to Hue and Hanoi are available from January 6 to 10. Call for Papers here( them: Lotusinthemud: sakyadhita uk: international association of buddhist women - july 4th 2010 at sukhavati, amida london. 'Calling a Council of Buddhist Women' Sunday 4th July 10 - 4pm Acharya Modgala of the Amida Trust and Ani Jinpa Khandro (Beatrice Jutta Gassner), one of the Founder Members of Sakyadhita UK, would like to introduce Sakyadhita and invite you to a 'Council of Buddhist Women' with the aim to explore ways of mutual benefit in working together on an international and national level. 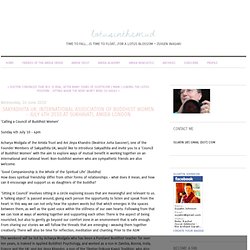 Non-buddhist women who are sympathetic friends are also welcome. 'Good Companionship is the Whole of the Spiritual Life' (Buddha) How does spiritual friendship differ from other forms of relationships – what does it mean, and how can it encourage and support us as daughters of the buddha? 'Sitting in Council' involves sitting in a circle exploring issues that are meaningful and relevant to us. Please let us know if you are intending to come, and bring some vegetarian food for a shared lunch. Information and booking: Telephone 0207 263 2183 or email modgala2004@lycos.com or sakyadhita-uk@gmx.net www.amidalondon.org.uk. Sakyadhita Conference in Vaishali, India 2013. There is very little in the world that is as sustaining and supportive of one’s deepest intentions than discovering the companionship of like-minded practitioners. 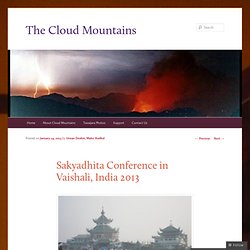 One of the main reasons that Graham and I hightailed it out of Kerala for the northern parts of India was so that I could attend the 13th Sakyadhita International Conference on Women in Buddhism. This is an event I have wanted to attend for many years, but which my life as a resident priest at Tassajara Zen Mountain Center prevented me from doing so. F inally, and with the blessing and support of the San Francisco Zen Center, I was able to participate. Sakyadhita, which literally means “Daughters of the Buddha,” has been holding such conferences more or less bi-annually since 1987. Conference was to take place over seven days, with a daily schedule of meditation, Buddhist chanting services, presentations from a wide variety of speakers, afternoon workshops, and a cultural event each evening.

Ether before breakfast. Sakyadhita Conference. What I did over Christmas Vacation With the support of Tsadra Foundation, I ventured forth to the 11th Sakyadhita International Conference on Buddhist Women, held from December 28th through January 3rd, in Ho Chi Minh City, or Saigon, in Vietnam. 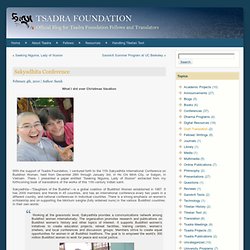 There, I presented a paper entitled “Seeking Niguma, Lady of Illusion” extracted from my forthcoming book of translations of the works of this 11th century Indian saint. Sakyadhita—”Daughters of the Buddha”—is a global coalition of Buddhist Women established in 1987. It has 2000 members and friends in 45 countries, and has an international conference every two years in a different country, and national conferences in individual countries. There is a strong emphasis on women’s scholarship and on supporting the bikkhuni sangha (fully ordained nuns) in the various Buddhist countries. Working at the grassroots level, Sakyadhita provides a communications network among Buddhist women internationally. I really didn’t know there were so many! Ordination: Sakyadhita’s Heritage from the Buddha. Ordination: Sakyadhita’s Heritage from the Buddha by Bhikshuni Dhammananda© A paper presented at the International Conference on Buddhism in Asia : Challenges and Prospects, at the Central Institute of Higher Tibetan Studies in Sarnath, India, February 10-12, 20, 2006 Introduction It was Maha Pajapati Gotami, the Buddha’s step mother and aunt who received this heritage directly from the Buddha.