26 Scientifically Proven Superhuman Benefits of Meditation. I have a confession to make… I know meditation is meant to be good for you but I don’t meditate every day. 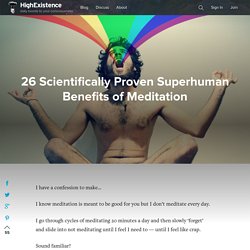 I go through cycles of meditating 20 minutes a day and then slowly ‘forget’ and slide into not meditating until I feel I need to — until I feel like crap. Sound familiar? But recently things have been different. For the last 30 days I’ve meditated for 25 minutes in the morning, 25 minutes in the evening and taken multiple 5 minute mindfulness breaks throughout the day.

I’ve written posts on the myths of motivation in the past going into the science of what makes people tick, but what I didn’t mention is what I believe the ultimate motivator is: reasons to act. Simple I know, but when you have enough reasons to do something, motivating yourself to do it becomes a non-issue — this is why I tell everyone to read a book on a habit they want to change. Bombarding your brain with reasons to act makes motivation easy. I didn’t eat any vegetables until I was 20. Want to give up smoking? 1. 2. 3. How to Fix Your Soul - Umair Haque. This crisis has been lurching on — and on — for half a decade now. 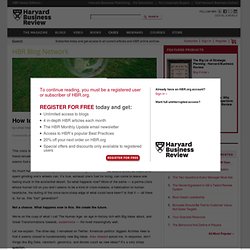 No wonder that, as a good friend remarked to me the other day, everyone we know (young, dumb, and hopelessly awesome) seems foot-draggingly tired, existentially fatigued — literally world-weary. So much human potential squandered for such a significant chunk of time in a life; so much time spent grinding one’s wheels can, it’s true, exhaust one’s fuel for living; can come to leave one feeling stuck in the existential desert. So what happens now? More of the same — a perma-crisis whose human toll on you and I seems to be a kind of crisis-malaise, a habituation to human heartache, the dulling of the once-razor-sharp edge of what could have been? Is that it — all there is, for us, this “lost” generation? Not a chance.

We’re on the cusp of what I call The Human Age: an age in history rich with Big Ideas about, and Great Transformations towards, eudaimonia — life lived meaningfully well. Let me explain. So here’s my answer. Starseed-Lynx. Indigos and Starseeds have been incarnating on the planet for a very long time and you might be one, your parent or grandparent or even your great, great grandparent may have been an Indigo or a Starseed. 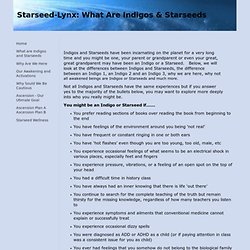 So, what exactly are Indigos and Starseeds and why are we different? To understand the answer, we must look at the bigger picture, the Galactic view. Agreements are made between earth humans and the Indigo or Starseed prior to birth, most often prior to the birth of the parents. All other humans on earth. The opposite in fact. DNA. For Enlightening Minds. The Indigo and Crystal children that come to the planet are known as "starchildren". 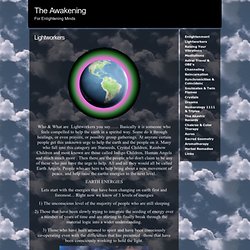 Often this is because their souls are more at home in the stars, and they have not incarnated on Earth before. They come at this time as a "special assignment" team to assist Earth and her inhabitants with their transition and rebirth as a higher dimensional "New Earth". But while these beings appear like ordinary human beings, they do in fact have access to a greater range of human potential. They are more open to who they are, closer to a recognition of their divine origins and essence. Indigo children are born onto the Indigo Soul Ray of Incarnation and Evolution. The Crystal children, on the other hand, are mostly born into the Gold Ray of Incarnation and Evolution.

With these gifts and abilities, Crystal beings are immensely powerful and creative. The Future Crystal child will be known as a "Rainbow Crystal" being. The Human Angel For Human Angels there is work to do. An Evolutionary Leap. Akashic Records. The universe has a memory, like all that lives. 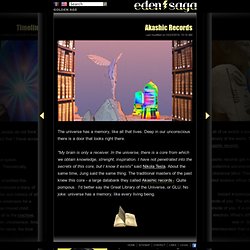 Deep in our unconscious there is a door that looks right there. "My brain is only a receiver. In the universe, there is a core from which we obtain knowledge, strenght, inspiration. I have not penetrated into the secrets of this core, but I know it exists" said Nikola Tesla. About the same time, Jung said the same thing. Deep in our unconscious, there's a gate looking right there.