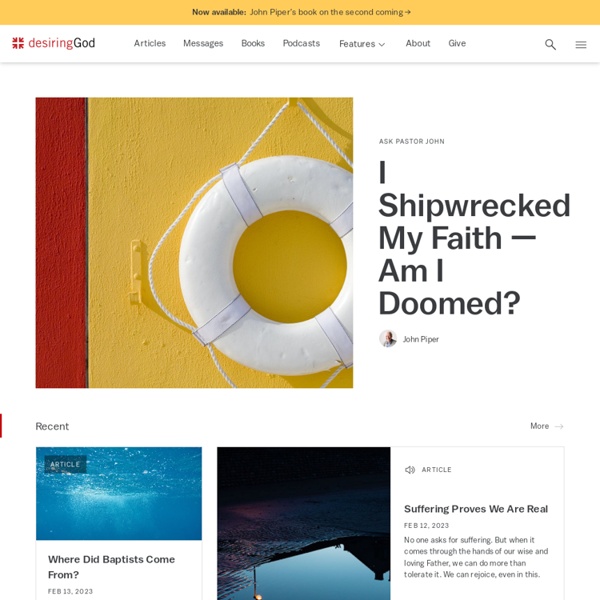 Or browse by Scripture, Topic, or Language. Blog Subscribe Older Posts Tony Reinke Like children scattering around a yard for Easter eggs, you and I are on a hunt. We all hunt.

King James Version The King James Version Bible (KJV) was authorized by King James I and is sometimes referred to as the “Authorized Version”. It was translated by the Church of England and was first published in 1611. The KJV New Testament was translated from the Textus Receptus. Thy Word is Truth The new release of the major Hollywood film Noah has created a deluge of reactions both inside and outside the Christian community. Some notable religious leaders have praised the $160 million biblical epic, while others have misgivings about the aggressive pushing of radical environmentalism featured throughout the film. However, the thing that might be most controversial about this movie is its attempt to radically redefine the character of God and the events that led to the destruction of earth. We've been paying close attention to the reviews of this film from both Christian and non-Christian critics alike.

Hebrew Glossary Then name Ashkenaz (Bereishit 10:3) has since the 10th century been identified with Germany. As the German and French Jews of the medieval period formed a uniform group in culture and religious customs, they were all referred to as Ashkenazim in contradistinction to the Sefardim or Spanish- Portuguese Jews. Ashkenazim are the people who use Nusach Ashkenaz, the prayer arrangement adopted by the medieval Franco-German Jews, including certain variations described as belonging to the Polish custom (Minhag Polin). In the 18th century, the Chasidic movement adopted the Sefardic arrangement of prayers; hence, the Chasidim have been called Sefardim on many occasions. The Ashkenazim in Eastern Europe developed an intense religious life, disseminating Talmudic scholarship among the people to a degree never before surpassed in Jewish history.

New American Standard Bible The New American Standard Bible (NASB or NAS), completed in 1971, is widely regarded as one of the most literally translated of 20th-century English Bible translations. According to the NASB's preface, the translators had a "Fourfold Aim" in this work: These publications shall be true to the original Hebrew, Aramaic, and Greek. They shall be grammatically correct. They shall be understandable.

Hebrew Alphabet The Hebrew and Yiddish languages use a different alphabet than English. The picture below illustrates the Hebrew alphabet, in Hebrew alphabetical order. Note that Hebrew is written from right to left, rather than left to right as in English, so Alef is the first letter of the Hebrew alphabet and Tav is the last. The Hebrew alphabet is often called the "alefbet," because of its first two letters. Letters of the Alefbet Early Church Fathers - Additional Works in English Translation u Early Church Fathers - Additional Texts Edited by Roger Pearse These English translations are all out of copyright, but were not included in the 38 volume collection of Ante-Nicene, Nicene and Post-Nicene Fathers. Please take copies and place online elsewhere. In some cases I have felt it necessary to add an introduction to the online text.

Hebrew Lexicon The Old Testament Hebrew lexicon is Brown, Driver, Briggs, Gesenius Lexicon; this is keyed to the "Theological Word Book of the Old Testament." Also included are pronunciations of each word with alternate pronunciations if available. Bible Study Tools offers two Bible versions, King James and New American Standard, for studying within the Old Testament lexicons. Greek and Hebrew Interlinear Bible and Concordance Welcome to the Interlinear Bible. The Interlinear Bible is keyed to the Greek and Hebrew text using Strong’s Concordance. Read the original and literal Greek or Hebrew text with Strong’s words using the King James Version or New American Standard.