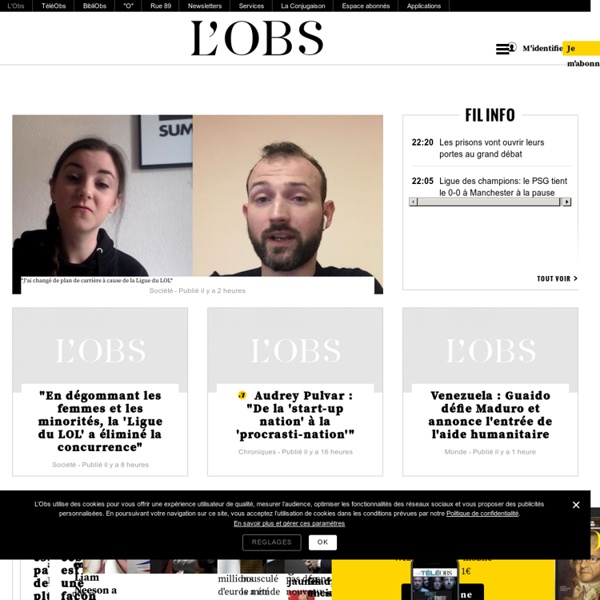 French Language Blog Image courtesy of MEIF bassinrennes This post has no political agenda, but Hillary’s announcement got me thinking. You may have learned that certain job titles are always masculine in French, regardless of whether a woman holds the position. The example I always think of is le professeur (professor/teacher). Journal home : Nature Raphael Lis, Charles C. Karrasch, Michael G. Poulos, Balvir Kunar, David Redmond, Jose G. Barcia Duran, Chaitanya R. Badwe, William Schachterle, Michael Ginsberg, Jenny Xiang, Arash Rafii Tabrizi, Koji Shido, Zev Rosenwaks, Olivier Elemento, Nancy A. Speck, Jason M. French Reading French Reading If you're trying to practice your French Reading then the page below should help. You will be able to sharpen your comprehension and understanding of the sample text below, which is part of the Article 26 and 27 from the Universal Declaration of Human Rights. The first section is in French and the second part is in English. Also don't forget to check the rest of our other lessons listed on Learn French. Enjoy the rest of the lesson!

The Top 6 Game-Changing Features of Google Wave Without a doubt, the product that has the entire web buzzing right now is Google Wave, the search giant's newly announced communication platform. Earlier this week, we brought you detailed information on the new Google product in our article Google Wave: A Complete Guide, but now we want to explore exactly why everyone is so excited about Google Wave. You've probably heard people talk about Google Wave being a game-changer, a disruptive product, or maybe even as an email killer. But while keywords and phrases like these grab people's attention, they don't explain why or how Google Wave could be a paradigm-shifter. In this article, we explore these questions by highlighting some of Google Wave's most unique and promising features.

Histoires en français avec sous-titres Upload Subscription preferences Loading... Working... Odile De Troy ► Play all 40 maps that explain the world Maps can be a remarkably powerful tool for understanding the world and how it works, but they show only what you ask them to. So when we saw a post sweeping the Web titled "40 maps they didn't teach you in school," one of which happens to be a WorldViews original, I thought we might be able to contribute our own collection. Some of these are pretty nerdy, but I think they're no less fascinating and easily understandable. A majority are original to this blog, with others from a variety of sources. I've included a link for further reading on close to every one.

French Fun - Games - Comics - Tongue Twisters - Jokes When you're tired of studying French, take a break with these fun sites that I've found on the net. There are games, jokes, comics, tongue twisters, and more. Personality QuizTake this quiz to find out your French student personality! Discover whether your study habits are worthy of an A, B, C, or even, gasp, a D. Went Walkabout. Brought back Google Wave. Back in early 2004, Google took an interest in a tiny mapping startup called Where 2 Tech, founded by my brother Jens and me. We were excited to join Google and help create what would become Google Maps. But we also started thinking about what might come next for us after maps. As always, Jens came up with the answer: communication. He pointed out that two of the most spectacular successes in digital communication, email and instant messaging, were originally designed in the '60s to imitate analog formats — email mimicked snail mail, and IM mimicked phone calls.