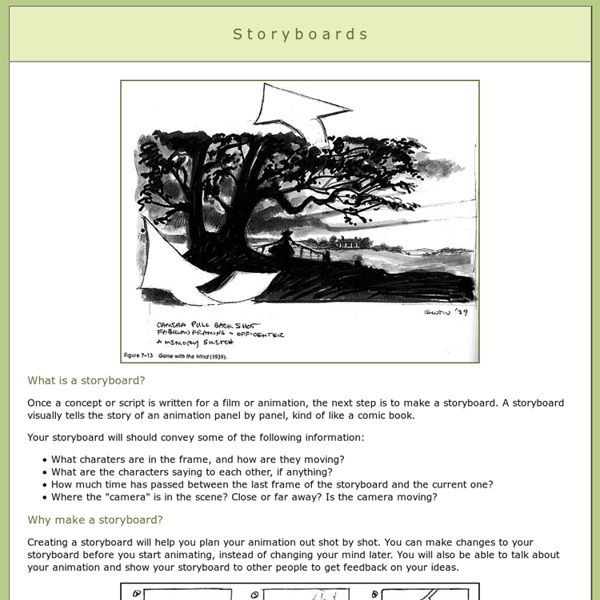 Storyboarding: A Simple Way To Get Professional In Course Authoring You will be well served by making a habit of drafting a rough scheme of the course before starting any actual work on it. This draft should outline the main pages of the course, and will aid you all the way throughout the course creation. eLearning professionals call such drafts “storyboards” and use them extensively. Let’s take a closer look at what storyboards are, and how you can use them to start building better courses in a more efficient manner. No two storyboards are quite alike. Some prefer to draw pencil sketches on paper, so that it’s easy to add new pages to the course skeleton and make fast edits to previously created thumbnails.

Storyboard language Basic definitions of terms[edit] Aerial shot: A shot taken from a plane, helicopter or a person on top of a building. Not necessarily a moving shot. Backlighting: The main source of light is behind the subject, silhouetting it, and directed toward the camera. Bridging shot: A shot used to cover a jump in time or place or other discontinuity. Examples are the falling calendar pages, railroad wheels, newspaper headlines, and seasonal changes. Eisenstein's montage theory Montage--juxtaposing images by editing--is unique to film (and now video). During the 1920s, the pioneering Russian film directors and theorists Sergei Eisenstein and Dziga Vertov demonstrated the technical, aesthetic, and ideological potentials of montage. The 'new media' theorist Lev Manovich has pointed out how much these experiments of the 1920s underlie the aesthetics of contemporary video. Eisenstein believed that film montage could create ideas or have an impact beyond the individual images.

Crochet a Gorgeous Mandala Floor Rug In this tutorial we’ll be making a beautiful crochet rug, made from T-shirt yarn. The pattern uses US terms and stitches include slip stitch (sl st); double crochet (dc); chain (ch); increase (inc) and a magic ring. T-shirt yarn (also called Zpagetti) in two colours that complement each other. Storyboards for a film with Flickr, OpenClipart, Inkscape, Gimp, and ImageMagick How do you get a flurry of images in your head into a concrete description of a film so that you can produce it? One important step is to create storyboards. For the storyboards on Lunatics, I've used a variety of approaches, from rough sketches on index cards to found photos and collages. This has allowed me to collect my ideas and get them into a concrete form -- both as cards I can manipulate directly and as images on computer that I will later be able to turn into an animatic. Making Movies with Free Software This article is part of an on-going series on the challenges I've faced in producing two free-licensed movies, Marya Morevna, through the Morevna Project and Lunatics, which I am working on as part of Anansi Spaceworks.

colonizing virtual reality Chris Chesher Introduction New technologies do not appear from nowhere as a mystical spark of inspiration from the mind of one individual. Nor are they inevitably accepted for their self-evident benefits. A technology emerges through a process involving broader cultural, linguistic, institutional and technological contexts. One clear illustration of this process can be drawn with the appearance of "virtual reality" in 1989, and the subsequent popularization of the idea through the media. On June 7, 1989 the computer-aided design software company Autodesk and the eclectic computer company VPL announced a new technology called "virtual reality."1 In marketing this new technology (which represented a major shift in thinking about the nature of computers), the developers and promoters drew on a range of tropes: VR is shared and objectively present like the physical world, composable like a work of art, and as unlimited and harmless as a dream.

Bad Blood's Storyboards, how to storyboard, storyboard tutorial, storyboard artist IMPORTANT NOTE: Before you begin with this reading, I have to make something very clear: This section on storyboarding is intended for 'directors' or people who would like to "visualise" their own projects. Directors should never allow the 'storyboard artist' to direct their films; the film should be the director's vision. Having said thus, storyboard artists will find my observations and experiences useful in their own work and in their interaction with directors.

Cognitive science Cognitive science is the interdisciplinary scientific study of the mind and its processes.[1] It examines what cognition is, what it does and how it works. It includes research on intelligence and behavior, especially focusing on how information is represented, processed, and transformed (in faculties such as perception, language, memory, reasoning, and emotion) within nervous systems (human or other animal) and machines (e.g. computers). Cognitive science consists of multiple research disciplines, including psychology, artificial intelligence, philosophy, neuroscience, linguistics, and anthropology.[2] It spans many levels of analysis, from low-level learning and decision mechanisms to high-level logic and planning; from neural circuitry to modular brain organization. The fundamental concept of cognitive science is "that thinking can best be understood in terms of representational structures in the mind and computational procedures that operate on those structures.