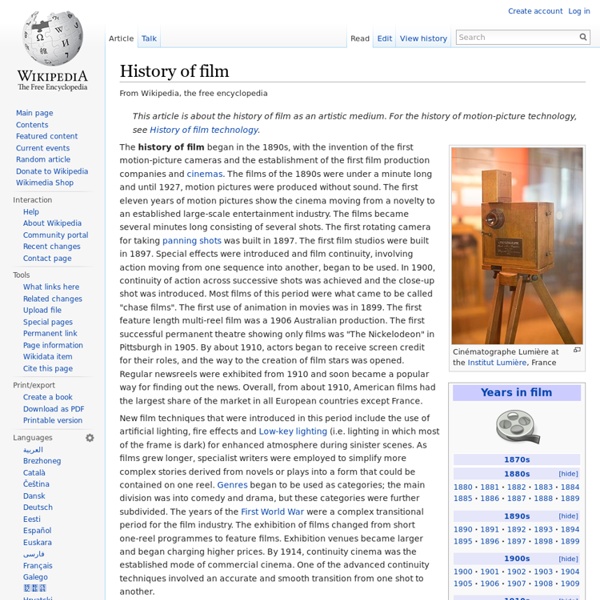 This article is about the history of film as an artistic medium. For the history of motion-picture technology, see History of film technology. New film techniques that were introduced in this period include the use of artificial lighting, fire effects and Low-key lighting (i.e. lighting in which most of the frame is dark) for enhanced atmosphere during sinister scenes. As films grew longer, specialist writers were employed to simplify more complex stories derived from novels or plays into a form that could be contained on one reel. Genres began to be used as categories; the main division was into comedy and drama, but these categories were further subdivided. The years of the First World War were a complex transitional period for the film industry. D. The desire for wartime propaganda created a renaissance in the film industry in Britain, with realistic war dramas. During the 1980s, audiences began increasingly watching films on their home VCRs. Early period[edit] Birth of movies[edit]

The guide to British Cinema and Movie History Backgound> <meta name="description" content="British Cinema History and Background - The definitive guide to British Movies | Films | Cinema | Actors | Actresses | Music | Clips"> <meta name="keywords" content But there was several embers of hope the careers of Ronald Coleman, Victor McLaglen, Leslie Howard and Charles Laughton were starting and although Howard was to be a casualty of WWII these actors along with Balcon and Wilcox were determined that British pictures should survive. Even the son of the Prime Ministers Anthony Asquith joined in to keep the industry alive. But in 1927 Parliament brought in an important piece of legislation the Cinematographers Trade Bill, designed to ensure there was a guaranteed home market for British made films. All was not lost and in the 30’s the British Cinema Industry would start to rise from its knees. John Maxwell's British International Studios trained many of this period's notable directors, writers and cameramen. In 1933 J. All the major film producers started to take over studios. During the 1930's two other valuable assets came along; the British Film Institute and the National Film Archives.

A Short List of Film Terms • Department of English • By David T. Johnson Part of being a good film student is knowing the language of film. narrative - An adjective describing a film as being primarily a work of fiction, or a noun that loosely means a fictional story. documentary - Also an adjective or noun category used to describe a work of nonfiction. plot - refers to all aspects of the narrative that we see on screen. story - refers to all aspects of the narrative that we do not see on screen; these aspects may include events before, during, or even after the plot of the film. diegesis - refers to the narrative that we see on screen. point of view - Most people assume film always has a third-person perspective, but even when it does not use a POV shot (see below), film often has a more subjective perspective through the use of camera placement, voiceover, and other cinema techniques. setting - like the literary term, this word refers to the time and place of the film. prop - another term borrowed from theater.

Introduction - The World of 1898: The Spanish-American War (Hispanic Division, Library of Congress) On April 25, 1898 the United States declared war on Spain following the sinking of the Battleship Maine in Havana harbor on February 15, 1898. The war ended with the signing of the Treaty of Paris on December 10, 1898. As a result Spain lost its control over the remains of its overseas empire -- Cuba, Puerto Rico, the Philippines Islands, Guam, and other islands. Background Beginning in 1492, Spain was the first European nation to sail westward across the Atlantic Ocean, explore, and colonize the Amerindian nations of the Western Hemisphere. Cuba Following the liberation from Spain of mainland Latin America, Cuba was the first to initiate its own struggle for independence. The Philippines Islands The Philippines too was beginning to grow restive with Spanish rule. Puerto Rico United States U.S. interest in purchasing Cuba had begun long before 1898. The War U.S. troops attacked the San Juan heights on July 1, 1898. Back to top

Cinema of the United Kingdom The identity of the British industry, and its relationship with Hollywood, has been the subject of debate. The history of film production in Britain has often been affected by attempts to compete with the American industry. The career of the producer Alexander Korda was marked by this objective, the Rank Organisation attempted to do so in the 1940s, and Goldcrest in the 1980s. Numerous British-born directors, including Alfred Hitchcock and Ridley Scott,[14] and performers, such as Charlie Chaplin[15] and Cary Grant, have achieved success primarily through their work in the United States. In 2009 British films grossed around $2 billion worldwide and achieved a market share of around 7% globally and 17% in the United Kingdom.[16] UK box-office takings totalled £1.1 billion in 2012,[17] with 172.5 million admissions.[18] History[edit] Origins and silent films[edit] The first people to build and run a working 35 mm camera in Britain were Robert W. The early sound period[edit] The 1960s[edit]

Movie Scenes Before and After Special Effects Infrastructure Policy: Lessons from American History - The New Atlantis Adam J. White For the last several years, dating back to the Iraq War’s low point, it has been the vogue to speak of “nation-building at home.” It is intended as a pun: usually when we talk about “nation-building” we mean the work of establishing in other countries the institutions and values necessary for political stability. Those who speak of “nation-building at home” imply that the cost of overseas interventions has left the United States in a condition of disrepair. The question of infrastructure (or “internal improvements,” or “public works”) has bedeviled the nation since its founding. In this, as in all things, history rhymes: where Franklin Roosevelt promised in a fireside chat that Americans would “see the dirt fly,” Barack Obama, prior to his inauguration, promised Americans “shovel-ready projects all across the country.” One recent pair of events illustrates perfectly the nation’s Janus-faced view of infrastructure. There is no reason why we can’t do this. Laying Foundations

Le voyage dans la lune The British Cinema History Research Project In 2001 the Film, Television and Media Studies department at the University of East Anglia was awarded a substantial grant under the AHRB's Resource Enhancement Scheme. There are two main strands of the project, each of which is designed to encourage wider use of a major resource in the study of British film history through the creation of online materials. Kine Weekly The BCHRP has produced a detailed online index to Kinematograph Weekly for the years from May 1955 to February 1971 when the magazine folded, together with sample material from 1915 and from 1943-1945. While other sources provide references for reviews in Kine Weekly, for the first time this index also allows researchers to trace the history of individual cinemas, towns, personnel, production companies, studios and subjects as they are mentioned in the magazines many articles and news items. For more information about the British Cinema History Research Project please contact:

It talks about when film started by dylanr22 Mar 12