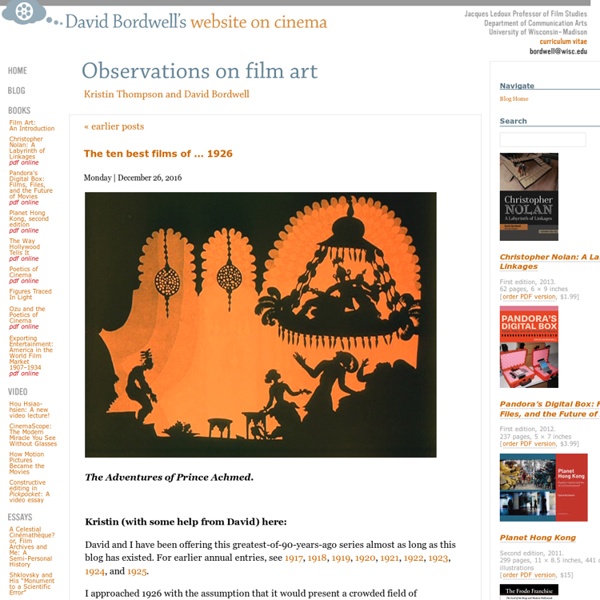 The Adventures of Prince Achmed. Kristin (with some help from David) here: David and I have been offering this greatest-of-90-years-ago series almost as long as this blog has existed. For earlier annual entries, see 1917, 1918, 1919, 1920, 1921, 1922, 1923, 1924, and 1925. I approached 1926 with the assumption that it would present a crowded field of masterpieces; surely it would be difficult to choose ten best films. Still, the Soviet directors were going full-tilt by this time and contribute three of the ten films on this year’s list. The Russians are coming Vsevolod Pudovkin’s Mother was a full-fledged contribution to the new Montage movement in the Soviet Union. Along with Potemkin, Mother was one of the key founding films of the Montage movement. As the Mother sits beside her husband’s dead body, her son, a participant in the 1905 failed revolution, comes in. Mother was released on DVD by Image Entertainment in 1999, but it seems to be very rare. Petit mais grand Lloyd and Lubitsch Related:  Teoria cinematografica

Film Studies For Free girish | The Permanent Seminar on Histories of Film Theories | Film criticism: Always declining, never quite falling Daumier, Le mélodrame (1860-64) DB here: Before the Internets, did people fret as much about movie criticism as they do now? The dialogue has become as predictable as a minuet at Versailles. Film criticism is dead. No, it’s not! Hah! Well, the track record of the official movie critics isn’t that great. Infinitely more awful is what you read on the Net. The result being….? Same thing goes for the Net. Yeah? But not a passion for using Spellcheck. So if print criticism is so valuable, how come all those professional critics are getting fired? Film criticism is dead. Repeat as often as you like. I thought I had watched this rondelay often enough from the wallflower section, but I got dragged onto the dance floor by Tom Doherty. To watch their backs and retain their 401(k)’s, most print critics have been forced into sleeping with the enemy. Feeling the same heat, academic critics have also plunged into the brash new world. Unhappily, none of this enhanced our 401(k)s. Nothing if not critical

Just TV Sergio Leone and the Infield Fly Rule Screenplay Basics - Scripped - StumbleUpon A Scripped Compendium by Johnathan Carr Traditional storytelling recounts past events, whereas screenwriting is locked in the present - thus you may not deviate from PRESENT TENSE. You may also be tempted to describe every inch of the world you're creating - don't! Take comfort in the idea that a screenplay is not meant to have any literary value. As you're writing, be mindful to preserve only the most important details: information that will advance the story. At the beginning of a feature film script, often but not always, the first line will be: FADE IN. While you can write a longer ACTION paragraph, think about keeping it under five lines at a time. In the ACTION line, be sure to capitalize SOUND EFFECTS, CAMERA DIRECTION and the first appearance of a speaking CHARACTER. Use a PARENTHETICAL to note an action the speaker is performing while speaking or if you want to indicate whom the speaker is addressing such as addressing a new character in mid-DIALOGUE. Think subtext.

In Conversation: Steven Soderbergh Steven Soderbergh has directed 26 films since his 1989 debut, sex, lies, and videotape — the behind-closed-doors portrait of yuppie Louisiana often credited with kick-starting the indie-film revolution of the nineties, released when he was only 26. In the 24 years since, he’s been a remarkably prolific chameleon, managing arguably more than any other director of his generation to successfully bounce between the low- and high-budget, not only directing but often editing and shooting his own films, each, in its way, an audacious experiment. In one extraordinary three-year streak — 1998 to 2001 — he directed two noirish classics (Out of Sight, The Limey), pulled an Oscar performance out of Julia Roberts (Erin Brockovich), earned an Oscar of his own (Traffic, the same year he was also nominated for Brockovich), and launched a lucrative franchise (Ocean’s Eleven, followed by Twelve and Thirteen). So, retirement.Just to be clear, I won’t be directing “cinema,” for lack of a better word.