Prepaid Cards. Credit Card. EMV. Security. Bitcoins. Bank Glitches. How your bank is reacting to competition. Image copyright Thinkstock New lenders may struggle to prise customers from traditional banks even though their borrowing and lending rates can often be much better, research from the BBC suggests. 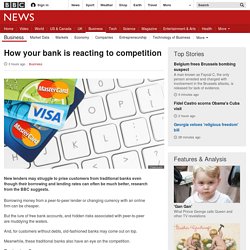 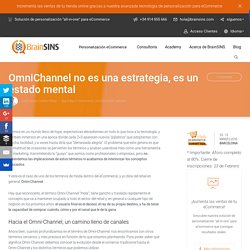 How 37 Banks Became 4 In Just 2 Decades, All In One Astonishing Chart. BoE deputy says he wants a world where 'banks can fail' Image copyright Reuters The Bank of England deputy governor has said he wants to help create a world where "banks can fail" following the second round of annual stress tests for the UK's biggest lenders. 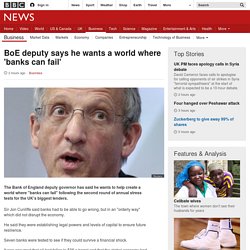 Sir Jon Cunliffe said banks had to be able to go wrong, but in an "orderly way" which did not disrupt the economy. He said they were establishing legal powers and levels of capital to ensure future resilience. Seven banks were tested to see if they could survive a financial shock. It was assumed that oil had fallen to $38 a barrel and that the global economy had slumped. Top 6 Mobile Banking Apps for Business. While banking apps for consumers are plentiful, small companies and even large corporations are limited in their ability to check up on things from their phones and tablets. 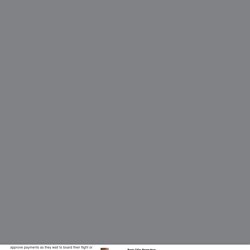 The world of financial apps for businesses is small - data from Malauzai Software show that there are only about 129 business mobile apps offered by banks with $50 million to $15 billion in assets. In other words, about 2% of community banks offer apps specifically for businesses. That compares to nearly two-thirds of community banks offering a consumer banking mobile app. Malauzai is one of the larger vendors of consumer and small business apps to community banks; FIS, Fiserv, NCR/Digital Insight, Q2, Alkami are also among the vendors providing mobile banking software banks can use to create apps for business clients.

Most of the largest banks have some sort of app for businesses, although those tend to be more skewed toward corporate clients. Here is a look at some of the standouts among the bank offerings. Mobiles 'most popular way to bank' - BBC News. Banking on smartphones is a "game changer" which is set to be more popular than using a computer to bank, a trade body has said. 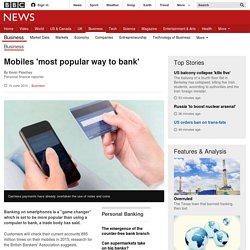 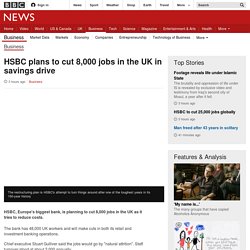 The bank has 48,000 UK workers and will make cuts in both its retail and investment banking operations. Chief executive Stuart Gulliver said the jobs would go by "natural attrition". Staff turnover stood at about 3,000 annually. A total of 25,000 jobs could be axed globally, meaning close to 10% of HSBC's 266,000 workers will go. Banks 'pay 60%' of profits in fines and customer payments - BBC News. Britain's largest banks have paid 60% of their profits since 2011 in fines and repayments to customers, according to a report by accountants KPMG. 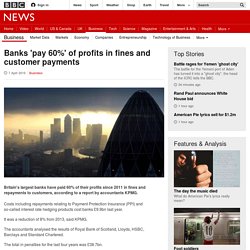 Costs including repayments relating to Payment Protection Insurance (PPI) and so-called interest rate hedging products cost banks £9.9bn last year. It was a reduction of 8% from 2013, said KPMG. The accountants analysed the results of Royal Bank of Scotland, Lloyds, HSBC, Barclays and Standard Chartered. The total in penalties for the last four years was £38.7bn. Bill Gates - Risk-based approach to Mobile Money. People around the world are holding an instrument for economic empowerment in the palm of their hands - but some of those who could benefit most from mobile money are facing a lock screen. 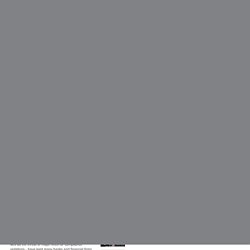 Mobile payments have emerged as a key tool in the fight against global poverty. People in poor and rural areas of countries like Kenya and India are already using cell phones to send and receive funds and pay bills. Facial recognition: Shop where everybody knows your name. 8 December 2014Last updated at 19:02 ET By Paul Rubens Technology reporter Shopping has changed quite a bit since these ladies were ushered to their car by a Whiteleys attendant Imagine walking into a shop you've never been in before, to be greeted by name by a sales assistant you don't know.

If you implement the automated process described in this article and add Google Glass, you could end up with a very interesting solution. – nnolasco

If you're David Beckham or Lily Allen you may be used to this type of VIP treatment, but if your fame is more limited, or even non-existent then you might find this attention rather disconcerting. 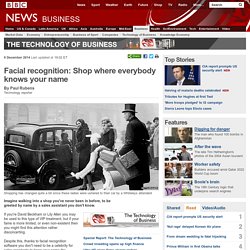 Despite this, thanks to facial recognition software you don't need to be a celebrity for sales assistants to know your name the moment you enter a shop. That's because companies such as Japanese technology giant NEC and FaceFirst, a California-based company, offer systems that use cameras placed at the entrances to shops to identify people as they come in. If your face fits. 'Too big to fail' bank rules unveiled by global regulators. 10 November 2014Last updated at 07:22 ET New global rules to prevent banks that are "too big to fail" from being bailed out by taxpayers have been proposed. 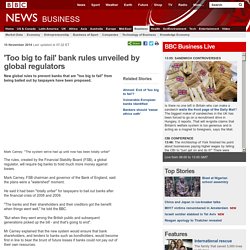 Mark Carney: "The system we've had up until now has been totally unfair" The rules, created by the Financial Stability Board (FSB), a global regulator, will require big banks to hold much more money against losses. Twitter payment system debuts in France. Jean-Yves Forel, left, CEO of BPCE, France's second largest bank group, and CEO of Paris-based bank’s e-payment unit S-Money Nicolas Chatillon, pose after a press conference in Paris, Tuesday, Oct. 14, 2014. Group BPCE, which includes Banque Populaire and Caisses d’Epargne, announced the service, called S-money. Users tweet a payment request to S-money, which then requires an authentication code before sending the amount – and a tweet to the destination confirming payment for all the world to see.

The banker, who can not be named for legal reasons, is the first person in the UK to plead guilty to the offence. Two men have already pleaded guilty in the US to fraud offences linked to the rigging of Libor, for years the benchmark by which trillions of pounds of financial contracts are based. The case arose from the Serious Fraud Office's (SFO) investigations. Pope tells super rich, bankers to find some ethics. Pope Francis on Monday denounced those getting rich through speculation in financial markets, calling on them to use their investments for the good of humanity.

"It is increasingly intolerable that financial markets are shaping the destiny of peoples rather than serving their needs, or that the few derive immense wealth from financial speculation while the many are deeply burdened by the consequences," he said. The pope, who has said he wants to create "a poor church for the poor", has frequently spoken out against the "idolatry of money" since his election last year. The 77-year-old said "it is important that ethics once again play its due part in the world of finance" and that markets should "serve the interests of peoples and the common good of humanity".

Bankers 'must swear oath' after scandals, says report. 29 July 2014Last updated at 07:40 ET An oath would prioritise the needs of bankers' customers An oath for bankers should be introduced to raise accountability and standards in banking, said the think tank ResPublica. It said the lack of public trust in banking after numerous scandals was an "ongoing concern" for the industry and the government. In a new report, ResPublica called for an oath for bankers to "fulfil their proper moral and economic purpose". Small businesses should also be treated as consumers, said the report. Fiserv Launches Tool that Models Customer Behavior. Fiserv has introduced a service to help companies predict their customers' behavior. Predictive Scores uses information from several large and complex data sets to help model customer behavior, Fiserv announced Thursday. Financial institutions have employed the tool as part of marketing or performance-management initiatives, the company said.

Predictive Scores uses data from customer accounts, online and mobile banking and bill payments to provide a model of customer behavior, Fiserv said. It is available as an in-house service or as part of Fiserv's Intelligent Workplace suite of products. The tool "provides financial institutions with extremely valuable insights that can lower their direct marketing production costs - by almost 50% for some clients," said Danny Baker, vice president of financial and risk-management solutions, in the news release.

Clinkle Demo Video - sneak peek. The Nature of the Bank. Ronald Coase, who died this month at the age of 102, was a remarkable thinker. Born in 1910, he came of age just as big business (or more precisely, big corporations) were coming into their prime. These organizational structures were ideally adapted to the technological, economic and cultural environments of the "late industrial age. " And his seminal paper "The Nature of the Firm," published in 1937, explained why. While Frederick Taylor and Alfred Sloan designed frameworks (and spawned new industries of business education and consulting) for managing the modern mega-corporation, Coase helped us understand their evolutionary success in the context of the environment in which they operated: an environment characterized by high growth, (mostly) abundant resources, standardization and perhaps most importantly, information scarcity and (relatively) high transaction costs.

Why IT failures at big companies are unlikely to go away. Why Banks Are Rethinking the Drive-Through. Imagining a Real-Time Payment System. How the Magic Kingdom Nails Product Rollout. Turkish Bank Lets Customers Build Their Own Apps. Garanti Bank, Turkey's second-largest private bank, has introduced a mobile dashboard called iGaranti that lets users cherry pick the features of their mobile banking apps. The customization capability is similar to the way people pick which apps appear on their smartphones' home screens.

Target Card Tests Future of Store-Branded Debit. How BNY Mellon Aims to Stay on Top for the Next 230 Years. U.S. Bank Broadens Use of E-Signatures to Loans, Account Opening, Treasury Management. Why UMB Is Ramping Up Video Banking in Its Branches. IBM Develops Liquidity Risk Dashboard for Bank CFOs.