Life insurance on the rise in Africa.

Plans afoot to cross-list ETFs on African bourses. THE JSE said on Thursday that discussions were taking place between market participants in Nigeria‚ Kenya and SA to launch the cross listing of exchange traded funds (ETFs) on the continent’s larger exchanges. 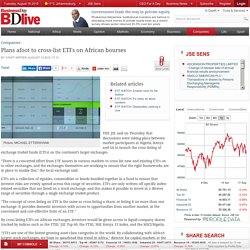 "There is a concerted effort from ETF issuers in various markets to cross list new and existing ETFs on to other exchanges‚ and the exchanges themselves are working to ensure that the right frameworks are in place to enable this," the local exchange said. ETFs are a collection of equities‚ commodities or bonds bundled together in a fund to ensure that investor risks are evenly spread across this range of securities. 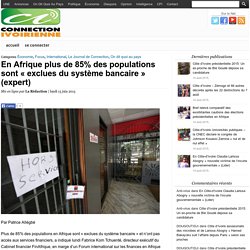 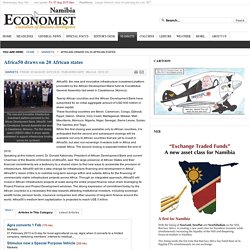 Growth in Africa’s GDP ‘will boost insurance’ Africa's anticipated 4.5% GDP growth in 2015 is expected to drive the expansion of insurance of African entities by both regional and global insurers. 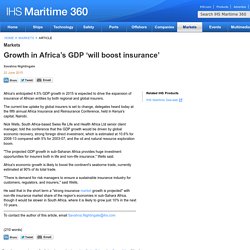 The current low uptake by global insurers is set to change, delegates heard today at the fifth annual Africa Insurance and Reinsurance Conference, held in Kenya's capital, Nairobi. Nick Wells, South Africa-based Swiss Re Life and Health Africa Ltd senior client manager, told the conference that the GDP growth would be driven by global economic recovery, strong foreign direct investment, which is estimated at 10.6% for 2008-13 compared with 5% for 2003-07, and the oil and natural resource exploration boom.

"The projected GDP growth in sub-Saharan Africa provides huge investment opportunities for insurers both in life and non-life insurance," Wells said. Africa's economic growth is likely to boost the continent's seaborne trade, currently estimated at 90% of its total trade. (210 words) 5 Middle-Market Deals in Africa That Are Making Waves in the U.S. The Carlyle Group is among U.S. firms moving into areas with an emerging middle class, says Konstantin Makarov of StratLink Africa By Konstantin Makarov, StratLink Africa July 16, 2015 The Carlyle Group (Nasdaq: CG) made a bold investment when it acquired the South African tire company Tiger Automotive in 2014. 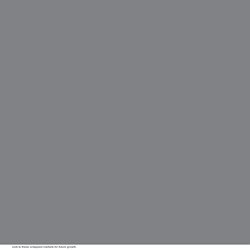 The acquisition signaled Carlyle’s interest in the rapidly developing African market, but it wasn’t the first time the firm had dabbled in African business. Africa-s-new-trade-zone-needs-insurance-backing-1.1892150# INDEPENDENT MEDIA A trader sells oranges in Durban, South Africa. 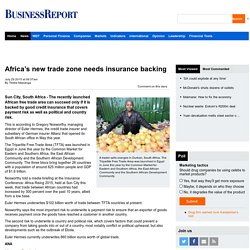 The Tripartite Free Trade Area was launched in Egypt in June this year by the Common Market for Eastern and Southern Africa, the East African Community and the Southern African Development Community. Sun City, South Africa - The recently launched African free trade area can succeed only if it is backed by good credit insurance that covers payment risk as well as political and country risk.

This is according to Gregory Nosworthy, managing director of Euler Hermes, the credit trade insurer and subsidiary of German insurer Allianz that opened its South African office in May this year. The Tripartite Free Trade Area (TFTA) was launched in Egypt in June this year by the Common Market for Eastern and Southern Africa, the East African Community and the Southern African Development Community.

The three blocs bring together 26 countries with a population of around 625 million people and GDP of $1.6 trillion. Warning Lights Flash for Africa Borrowers After Zambia Debt Sale. If Zambia’s latest Eurobond is any guide, other African borrowers lining up to tap capital markets should expect a jump in borrowing costs. 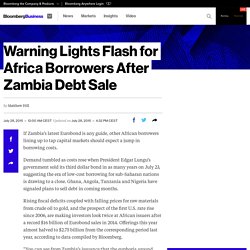 Demand tumbled as costs rose when President Edgar Lungu’s government sold its third dollar bond in as many years on July 23, suggesting the era of low-cost borrowing for sub-Saharan nations is drawing to a close. Ghana, Angola, Tanzania and Nigeria have signaled plans to sell debt in coming months. Rising fiscal deficits coupled with falling prices for raw materials from crude oil to gold, and the prospect of the first U.S. rate rise since 2006, are making investors look twice at African issuers after a record $16 billion of Eurobond sales in 2014. 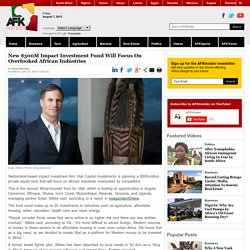 Photo: vital-capital.com Switzerland-based impact investment firm Vital Capital Investments is planning a $500-million private equity fund that will focus on African industries overlooked by competitors. This is the second Africa-focused fund for Vital, which is looking at opportunities in Angola, Cameroon, Ethiopia, Ghana, Ivory Coast, Mozambique, Rwanda, Tanzania, and Uganda, managing partner Eytan Stibbe said, according to a report in IndependentOnline. The fund could make up to 20 investments in industries such as agriculture, affordable housing, water, education, health care and clean energy. “People consider those areas that we’re active in as higher risk and there are less entities involved,” Stibbe said, according to IOL. The changing face of asset management in Africa. Africa PwC expects AUM in 12 markets to reach $1.1trn by 2020. 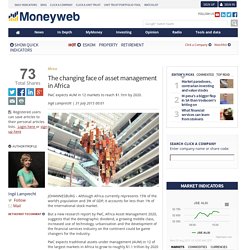 Ingé Lamprecht | 31 July 2015 00:01 JOHANNESBURG – Although Africa currently represents 15% of the world’s population and 3% of GDP, it accounts for less than 1% of the international stock market. But a new research report by PwC, Africa Asset Management 2020, suggests that the demographic dividend, a growing middle class, increased use of technology, urbanisation and the development of the financial services industry on the continent could be game changers for the industry. PwC expects traditional assets under management (AUM) in 12 of the largest markets in Africa to grow to roughly $1.1 trillion by 2020 compared to $293 billion in 2008, representing a compound annual growth rate (CAGR) of around 9.6%. Although projected assets under management are still insignificant compared to global giants like North America and Europe, the growth rate is expected to be much more meaningful over the next few years. 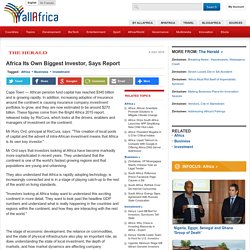 In addition, increasing adoption of insurance around the continent is causing insurance company investment portfolios to grow, and they are now estimated to be around $270 billion. These figures come from the Bright Africa 2015 report, released today by RisCura, which looks at the drivers, enablers and managers of investment on the continent. Mr Rory Ord, principal at RisCura, says: "This creation of local pools of capital and the advent of intra-African investment means that Africa is its own key investor. " Nigeria takes critical legal steps to launch as Africa’s financial hub. … but funding seen as key constraint Nigeria has set up critical legal frameworks that would enable the creation of a robust global financial market, and hopefully position the country to actualising the tall dream of an Africa’s financial hub mulled several years ago. Three critical bills that would give a push to the project include the Nigerian International Financial Centre (NIFC) establishment bill; Financial Ombudsman Commission Bill, and a bill to enable the use of information in Electronic form for Conducting Transactions and for connected purposes, were passed at the last minute by the seventh National Assembly.

Nigeria’s dream of evolving an International Financial Centre (IFC) is the high point of the realisation of the Financial System Strategy (FSS) 2020, which seeks to make Nigeria the safest and fastest growing financial system among emerging economies. “The benefits of an IFC abound. Africa's climate insurance scheme expands, eyes aid agency clients. By Megan Rowling BARCELONA, July 9 (Thomson Reuters Foundation) - Africa's fledgling insurance scheme covering governments against drought expects to add five countries this year, expanding its client base to nine nations, and plans to offer insurance for tropical cyclones and floods from next May.

In its first year of operation, African Risk Capacity (ARC), an African Union agency, insured Niger, Senegal, Mauritania and Kenya for $129 million in total losses, and paid out $26.3 million after three West African states suffered low rainfall. Senegal, Niger and Mauritania are using the money to distribute food and transfer cash to more than 1.3 million people, and subsidise animal feed for some 570,000 livestock. In the second policy year, which began in May, ARC expects Burkina Faso, Malawi, Mali, Gambia and Zimbabwe to join, with coverage set to rise to $192 million, it said. ARC is targeting total membership of 20 to 30 African countries over the next four years. Afreximbank syndications bring $8 billion into Africa - African export-import bank. The African Export-Import Bank (Afreximbank) attracted some $8 billion into Africa in 2014 through the 19 syndicated financing deals which it either arranged or co-arranged, Jean-Louis Ekra, President of the Bank, has announced.

The President, speaking in London on 7 May during Afreximbank’s annual update meeting with its relationship banks, said that a key part of the Bank’s strategy was to use traditional instruments in leveraging international financing into Africa, including through arranging or co-arranging syndications and club deals and inviting other financial institutions to share risk. He stated that for every dollar that the Bank committed in syndications during the year, it attracted $7 into Africa in a perfect example of leveraging external financing to support its lending activities. Mr. The events commenced in Abu Dhabi and Dubai on 5 May, with a meeting with investors, and were followed by an investor’s conference call on 8 May. A guide to African currencies: the Milk Index. MasterCard and Ecobank Group agree to accelerate electronic payments adoption in 32 Sub-Saharan African countries. Leading pan-African banking group Ecobank Transnational Inc. (“Ecobank”) today signed a landmark multi-country agreement with global payments technology company MasterCard to bring MasterCard’s payment solutions to more than 32 sub-Saharan African markets.

It is a move that is expected to increase the acceptance and adoption of electronic payments in Africa. A culmination of the multi-country licensing agreement signed by MasterCard and Ecobank in January 2014, this initiative will see Ecobank issue MasterCard debit, prepaid, and credit cards to millions of its customers over the next 10 years. Ecobank will also roll out innovative MasterCard acceptance solutions designed to expand the number of merchant locations that accept MasterCard payment cards on the continent. Michael Miebach, President, Middle East and Africa at MasterCard, adds: “Bringing the benefits of electronic payments to markets across Africa and creating a world beyond cash is a primary focus for MasterCard.

Tsega Gebreyes, managing partner of Satya, told IBTimes UK: "The idea is to use the combined strength of both organisations. UBS says fast-growing ranks of African billionaires (there are 200 ‘hidden’ ones too) need bankers. UBS Group AG, the Swiss company that says it banks more billionaires than any other, said wealthy Africans are rapidly adding to the ranks of the rich on the continent needing specialised financial services. Key markets on the continent for UBS include Nigeria and South Africa, plus an East African block covering Kenya, Tanzania and Uganda, Martin Emodi, the bank’s head of wealth management in Africa, said Wednesday in an interview at the World Economic Forum on Africa in Cape Town. Bank urges action to close boardroom gender gap in Africa. Women make up just 14% of the boards of major African companies and urgent action is needed to close the gender gap, according to the African Development Bank (AfDB).

Consumer demand to drive next wave of PE investments in Nigeria, S’Africa, others. Tax avoidance cost Africa $50 billion  - new Business Ethiopia (nBE) Africa’s money that could be used to improve lives and reduce poverty is leaving the continent through illicit financial flows defined as money illegally earned, transferred and used. Africa looses $50 billion a year through tax avoidance and fraud, accoding to a report. As the Chairperson of the High Level Panel on Illicit Financial Flows from Africa, the former South African President, Mr.

Strong dollar threatens debt crisis in sub-Saharan Africa. How Property Tax Would Benefit Africa - Africa Research Institute. Dr. Nara Monkam is Director of Research at the African Tax Administration Forum (ATAF). African Venture Capital: Nigeria and Kenya are leading the continent with startups and fundraising. While still small compared to much of the rest of the world, Africa’s startup scene is starting to gather momentum, led by Nigeria and Kenya, according to a new report. Africa Payments Report. ARC 2014 SWIFT Businss Intelligence. Africa's inequality linked to billions hidden in Europe. Can Companies In Africa Benefit From Adopting Bitcoin? More than 100,000 businesses worldwide accept bitcoin. Microsoft supports it. South African retailers such as Takealot.com accept it for payment and soon Nigerians will be able to exchange bitcoin in naira instead of U.S. dollars.