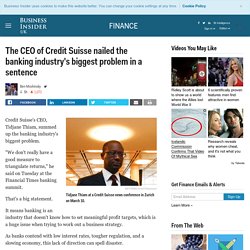 Credit Suisse's CEO, Tidjane Thiam, summed up the banking industry's biggest problem. "We don't really have a good measure to triangulate returns," he said on Tuesday at the Financial Times banking summit. That's a big statement. It means banking is an industry that doesn't know how to set meaningful profit targets, which is a huge issue when trying to work out a business strategy. As banks contend with low interest rates, tougher regulation, and a slowing economy, this lack of direction can spell disaster. Thiam had harsh words for return on equity targets, which have become a standard measure of performance. Return on equity measures the bank's income as a percentage of how much shareholder capital it has. "I will have return on equity, we will compute it, but if you pay people on ROE, the probability that you'll get a low E (amount of equity) is greater than 50%," Thiam said. 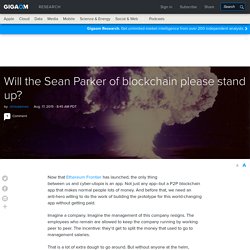 Not just any app–but a P2P blockchain app that makes normal people lots of money. And before that, we need an anti-hero willing to do the work of building the prototype for this world-changing app without getting paid. Imagine a company. Imagine the management of this company resigns. The employees who remain are allowed to keep the company running by working peer to peer. That is a lot of extra dough to go around. Without a legal department (they resigned too) each individual would need to write their own contracts: one for each person they work with regularly. That’s supposedly the promise of blockchains: peer-to-peer transactions for everything. If you missed the Ethereum launch, you are in no small majority. “You don’t see the BitTorrent company today making billions of dollars and becoming the new Google,” says Stephan Tual, CCO of Ethereum.

“The impact will be tremendous,” says Tual. 'Glijden we af naar een model waar een aangename oude dag alleen is weggelegd voor the happy few?' 70% of Rich Families Lose Their Wealth by the Second Generation. Algorithmic Trading: The Play-at-Home Version. After more than 100 hours of coding over three months, Mike Soule was finally ready to switch on his project. 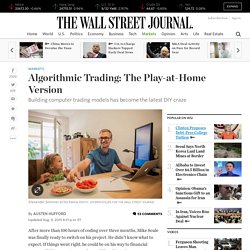 He didn’t know what to expect. If things went right, he could be on his way to financial success. If things went wrong, he could lose his savings. His creation wasn’t a new mobile app or e-commerce store. It was a computer program that would buy and sell currencies 24 hours a day, five days a week. DIY’s newest frontier is algorithmic trading. “It’s definitely one of those things where you are like, ‘Is this going to work?’” Interactive Brokers Group Inc. “College professors very rarely get asked for their autographs,” Mr. To learn more about the fundamentals of algorithmic trading, Alexander Sommer watched Mr. Betterment sets the record straight. Some context Betterment, the first automated investing service, has more than doubled assets under management in the past 6 months, from $1.1B to more than $2.3B. 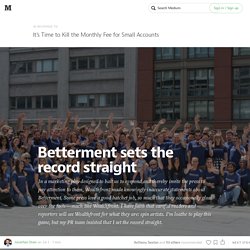 Wealthfront has not been growing as fast. Betterment has more than 3x the customers of Wealthfront, and the gap is widening, according to recent public Form ADV filings. PayPal stops service in Greece. Promotional posters for the new Everest movie recently appeared in New York City subway stations, and these days I travel to and from work with a strange lump in my throat. 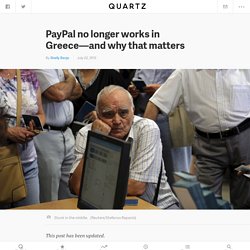 Everest, which opens in wide release in the US today (Sept. 25), is based on the true story of how eight people died in a storm on the world’s tallest mountain in 1996. It’s the same story that Jon Krakauer told in his bestselling book Into Thin Air. It was, until last year, the most deadly accident in Mount Everest’s history. Then on April 18, 2014, an ice release killed 16 climbers on the mountain. And barely a year later, April 25, 2015 became the new deadliest day in Everest history, when a magnitude 7.8 earthquake killed nearly 9,000 people in Nepal, 21 of them in an avalanche at Everest Base Camp.

I was there, and my feelings about it are still a mess of contradictions. But when I watched the Everest trailer online a few weeks ago, I couldn’t stop shaking. Millenials zijn klaar met de traditionele bank. Mensen krijgen steeds meer de keuze om hun financiële diensten te ontbundelen. 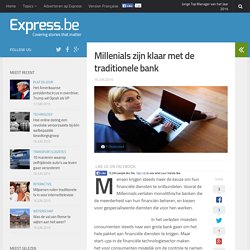