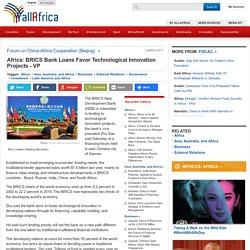 Established to meet emerging economies' funding needs, the multilateral lender approved loans worth $1.5 billion last year, mainly to finance clean energy and infrastructure developments in BRICS countries - Brazil, Russia, India, China, and South Africa. The BRICS share of the world economy shot up from 8.2 percent in 2002 to 22.2 percent in 2015. The BRICS now represents two thirds of the developing world's economy. Zhu said the bank aims to foster technological innovation in developing nations through its financing, capability building, and knowledge sharing. 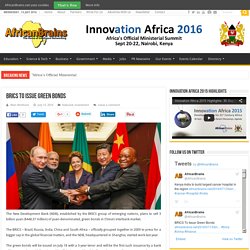 The BRICS – Brazil, Russia, India, China and South Africa – officially grouped together in 2009 to press for a bigger say in the global financial matters, and the NDB, headquartered in Shanghai, started work last year. The green bonds will be issued on July 18 with a 5-year tenor and will be the first such issuance by a bank of its type under guidelines issued by China’s central bank in December, according to a news release sent to Reuters. Bank of China Limited is the lead underwriter and book runner for the issue, while joint underwriters include the Industrial and Commercial Bank of China Limited , China Construction Bank Limited , HSBC Bank (China) Company Limited and Standard Chartered Bank (China) Limited. 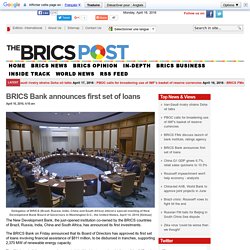 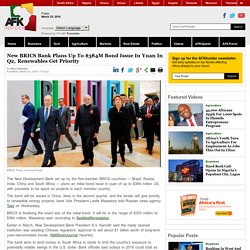 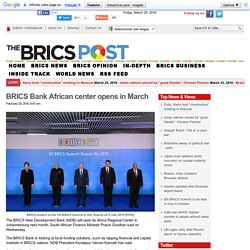 The BRICS Bank is looking at local funding solutions, such as tapping financial and capital markets in BRICS nations, NDB President Kundapur Vaman Kamath has said. South Africa’s first instalment of two billion rand (about $132 million) was paid in December last year, and the budget makes provision for South Africa’s further commitments over the medium term, Gordhan said in his 2016 budget speech in Parliament. “This initiative gives impetus to our role as a financial centre for Africa, and will facilitate access to global finance by African investors and institutions,” Gordhan said. Business & Economy - BRICS member-states contribute first $750 mln to New Development Bank. SHANGHAI, January 14. 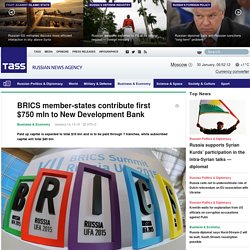 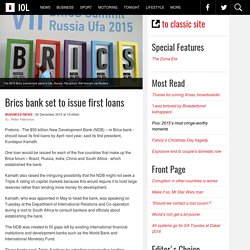 One loan would be issued for each of the five countries that make up the Brics forum – Brazil, Russia, India, China and South Africa - which established the bank. Kamath also raised the intriguing possibility that the NDB might not seek a Triple A rating on capital markets because this would require it to hold large reserves rather than lending more money for development. Kamath, who was appointed in May to head the bank, was speaking on Tuesday at the Department of International Relations and Co-operation during a visit to South Africa to consult bankers and officials about establishing the bank.

The NDB was created to fill gaps left by existing international financial institutions and development banks such as the World Bank and International Monetary Fund. The African Regional Centre would be set up within months, he said. Brics-will-play-a-profound-role-maasdorp-1.1880622# IN the run up to the start of the 7th Brics Summit today in the Russian city of Ufa, Business Report spoke to Leslie Maasdorp, the newly appointed vice-president of the Brics New Development Bank (NDB), whose launch this week will cap years of a push by the world’s major emerging economies to reshape the global financial system. 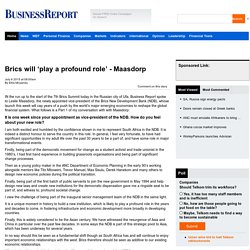 What follows is a Part 1 of my conversation with with Maasdorp: It is one week since your appointment as vice-president of the NDB. How do you feel about your new role? The Statesman: India to contribute $18 bn to BRICS forex reserves pool. India will contribute USD 18 billion to the USD 100 billion foreign-exchange reserves pool that is being set up by five nations of the BRICS grouping to help each other "in case of any problems with dollar liquidity". 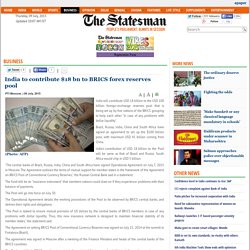 Brazil, Russia, India, China and South Africa have signed an agreement to set up the $100 billion pool, with maximum USD 41 billion coming from China. India's contribution of USD 18 billion to the Pool will be same as that of Brazil and Russia. South Africa to host Africa branch of Brics bank. Brics-bank-to-be-launched-in-russia-1.1880296# EPA Russian President Vladimir Putin (L), Indian Prime Minister Narendra Modi (2L), Brazil's President Dilma Rousseff (C), Chinese President Xi Jinping (2R) and South African President Jacob Zuma (R) during a meeting of the BRICS Leaders' prior to the G20 Leaders' Summit in Brisbane in 2014. 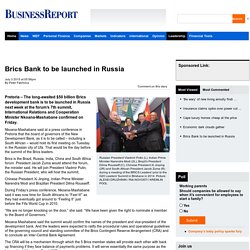 Picture: ALEXEI DRUZHININ / RIA NOVOSTI / KREMLIN POOL. BRICS $100 billion bank to be operational by end of 2015, South African named its vice president. Africa sovereign funds tread tricky path on investments. London: As the oil producers of Sub-Saharan Africa rush to create sovereign wealth funds, competing pressures to boost living standards now while saving for the future can throw up as many problems as they solve. Jose Filomeno dos Santos, chairman of Angola’s fledgling $5 billion fund, noted that while his country has one of Africa’s highest economic growth rates, it still has one of the continent’s highest child mortality rates.

“(Angola) still lacks doctors, it still lacks hospitals,” he told sovereign wealth fund conference at London’s Chatham House last week. “These are things that take time to build. Investment has to be done so that there’s a generation in the future that the sovereign wealth fund will be serving,” he said. African nations are relative newcomers to the club of countries running these funds. Then there is the risk of money being used to paper over long-term problems or line the pockets of corrupt politicians. That requires robust oversight and clear goals. African Markets - Factors to watch on Sept 16. NAIROBI, Sept 16 (Reuters) - The following company announcements, scheduled economic indicators, debt and currency market moves and political events may affect African markets on Tuesday. - - - - - EVENTS: ZIMBABWE - A $1.6 billion Zimbabwe-Russia joint venture project will be commissioned by President Robert Mugabe and Russian Foreign Minister Sergey Lavrov in Darwendale, 70 km outside the capital Harare.

GLOBAL MARKETS Asian shares held near one-month lows on Tuesday as investors braced for a possible hawkish shift in the U.S. Federal Reserve's policy stance as the Fed begins a two-day policy meeting later in the day. WORLD OIL PRICES Brent crude was little changed just below $98 a barrel on Tuesday, holding gains after recovering from its lowest price in more than two years but capped by a soft global economic outlook.

. © Thomson Reuters 2014 All rights reserved. Foreign Investment in Africa Seen at Record $80B in 2014 - Frontier Markets News - Emerging & Growth Markets. Trade law centre » BRICS Bank: Africa must rise to the occasion. Posted on Tuesday, May 14th, 2013 by Suleman, Yunus (KPMG Africa) in News There was a consensus by leaders of BRICS ‒ Brazil, Russia, India, China and South Africa ‒ regarding the formation of the BRICS development bank at the BRICS Summit held in Durban, South Africa, in March this year. The bank is expected to “mobilise resources for infrastructure and sustainable development projects in BRICS and other emerging economies, and developing countries.”

There is increasing assent that South Africa is the best option to base at this stage – a view also supported by President Jacob Zuma. Now is the time for Africa to rise to the occasion and be the base for this bank. As a starting point, the bank is expected to require an initial capital of US$50 billion. Because infrastructure is the backbone and key driver of economic development in any economy, the starting point for the bank is expected be investment in infrastructure development.