M Pesa + Bitcoin. How It Works. How it works GiveDirectly provides a wealth transfer service to the extreme poor in Kenya. 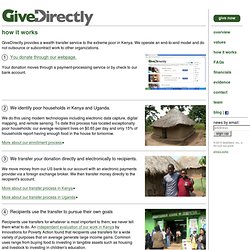 We operate an end-to-end model and do not outsource or subcontract work to other organizations. Your donation moves through a payment-processing service or by check to our bank account. We identify poor households in Kenya and Uganda. We do this using modern technologies including electronic data capture, digital mapping, and remote sensing. More about our enrollment process We select regions with high poverty rates using government data. We transfer your donation directly and electronically to recipients. We move money from our US bank to our account with an electronic payments provider via a foreign exchange broker. Low tech, high relevance and African SMS-based service potential. How Eneza Education shows the SMS-driven service potential. 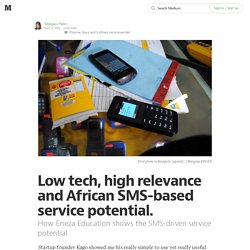 How mobile phones are making cash obsolete in Africa. When he rolls into a gas station to fill his tank, Barkhad Dahir doesn’t get out of his car. 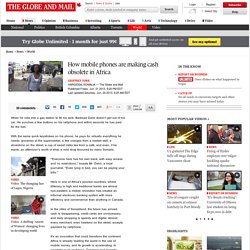 He punches a few buttons on his cellphone and within seconds he has paid for the fuel. With the same quick keystrokes on his phone, he pays for virtually everything he needs: groceries at the supermarket, a few oranges from a market stall, a shoeshine on the street, a cup of sweet milky tea from a café, and even, if he wants, an afternoon’s worth of khat, a mild drug favoured by many Somalis. “Everyone here has his own bank, with easy access and no restrictions,” boasts Mr. Mobile Money for the Developing World. A rapidly increasing number of people across the globe are now staying connected to one another via a mobile phone device – whether it’s an iPhone, Nokia, or Samsung. 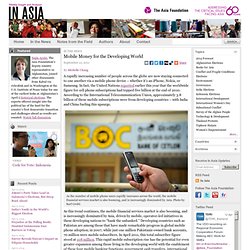 In fact, the United Nations reported earlier this year that the worldwide figure for cell phone subscriptions had topped five billion at the end of 2010. According to the International Telecommunication Union, approximately 3.8 billion of these mobile subscriptions were from developing countries – with India and China fueling this upsurge.

As the number of mobile phone users rapidly increases across the world, the mobile financial services market is also booming, and is increasingly dominated by Asia. VC4Africa – Venture Capital for Africa - Connecting Entrepreneurs and Investors. Cell phone minutes: the next currency. It might just be my old nature mind, but I still find it a daily miracle: being able to walk into the bakery around the corner and trade a piece of paper – called money – for a loaf of bread. 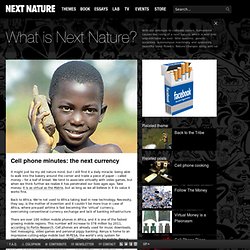 We tend to associate virtuality with video games, but when we think further we realize it has penetrated our lives ages ago. Take money; it is as virtual as the Matrix, but as long as we all believe in it its value it works fine. Back to Africa. We’re not used to Africa taking lead in new technology. Necessity, they say, is the mother of invention and it couldn’t be more true in case of Africa, where pre-paid airtime is fast becoming the ‘virtual’ currency, overcoming conventional currency exchange and lack of banking infrastructure.

There are over 100 million mobile phones in Africa, and it is one of the fastest growing mobile regions. Recently when the violence in Kenya flared up, pre-paid cell phone cards became the most valuable good around. Africa's leading online resource for Mobile Financial Inclusion. Kenyans Find the Unintended Consequences of Mobile Money. In Western Kenya, “Sambaza” is both a marketing slogan and means for despair. 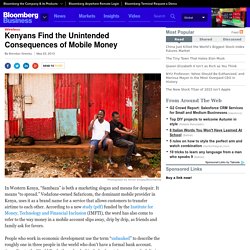 It means “to spread.” Vodafone-owned Safaricom, the dominant mobile provider in Kenya, uses it as a brand name for a service that allows customers to transfer airtime to each other. According to a new study (pdf) funded by the Institute for Money, Technology and Financial Inclusion (IMFTI), the word has also come to refer to the way money in a mobile account slips away, drip by drip, as friends and family ask for favors. People who work in economic development use the term “unbanked” to describe the roughly one in three people in the world who don’t have a formal bank account. According to the World Bank, the unbanked include almost 60 percent of adults in developing countries and 77 percent of adults making less than $2 a day. 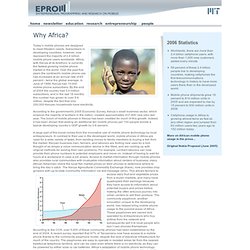 Subscribers in developing countries, however, now represent the majority of 2.4 billion mobile phone users worldwide. Africa, with Kenya at its forefront, is currently the fastest growing mobile phone market in the world. Over the past five years the continent's mobile phone use has increased at an annual rate of 65 percent - twice the global average. In June of 1999, Kenya had 15,000 mobile phone subscribers. By the end of 2004 the country had 3.4 million subscribers, and in the last 18 months this number has grown to over 5.6 million, despite the fact that only 200,000 Kenyan households have electricity. According to the government's 2005 Economic Survey, Kenya’s small business sector, which employs the majority of workers in the nation, created approximately 437,900 new jobs last year.