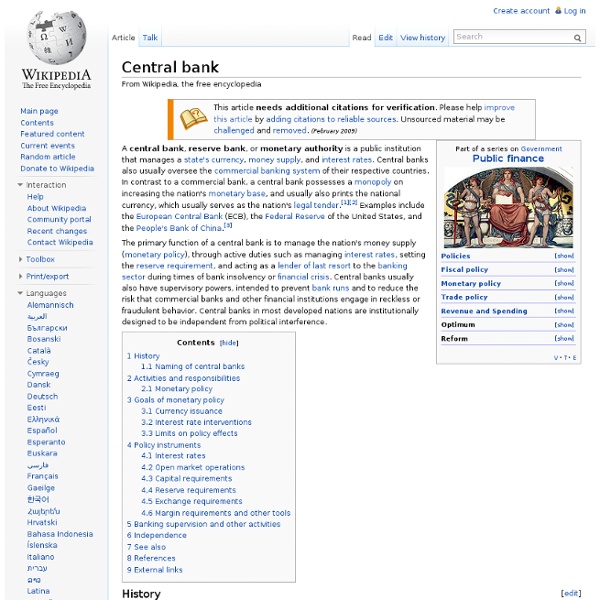 The primary function of a central bank is to manage the nation's money supply (monetary policy), through active duties such as managing interest rates, setting the reserve requirement, and acting as a lender of last resort to the banking sector during times of bank insolvency or financial crisis. Central banks usually also have supervisory powers, intended to prevent bank runs and to reduce the risk that commercial banks and other financial institutions engage in reckless or fraudulent behavior. Central banks in most developed nations are institutionally designed to be independent from political interference.[4][5] Still, limited control by the executive and legislative bodies usually exists.[6][7] The chief executive of a central bank is normally known as the Governor, President or Chairman. History[edit] Prior to the 17th century most money was commodity money, typically gold or silver. Bank of England[edit] The sealing of the Bank of England Charter (1694). Spread around the world[edit] Related:  Banking and finance issues

Bank of England - Wiki The Bank of England, formally the Governor and Company of the Bank of England, is the central bank of the United Kingdom and the model on which most modern central banks have been based. Established in 1694, it is the second oldest central bank in the world, after the Sveriges Riksbank, and the world's 8th oldest bank. It was established to act as the English Government's banker, and is still the banker for the Government of the United Kingdom. The Bank was privately owned by stockholders from its foundation in 1694 until nationalised in 1946.[3][4] In 1998, it became an independent public organisation, wholly owned by the Treasury Solicitor[5] on behalf of the government, with independence in setting monetary policy.[6][7][8][9] The Bank is one of eight banks authorised to issue banknotes in the United Kingdom, but has a monopoly on the issue of banknotes in England and Wales and regulates the issue of banknotes by commercial banks in Scotland and Northern Ireland.[10] History[edit]

J. P. Morgan John Pierpont "J. P." Morgan (April 17, 1837 – March 31, 1913) was an American financier, banker, philanthropist and art collector who dominated corporate finance and industrial consolidation during his time. Morgan died in Rome, Italy, in his sleep in 1913 at the age of 75, leaving his fortune and business to his son, John Pierpont "Jack" Morgan, Jr., and bequeathing his mansion and large book collections to The Morgan Library & Museum in New York. At the height of Morgan's career during the early 1900s, he and his partners had financial investments in many large corporations and had significant influence over the nation's high finance. Childhood and education[edit] J. In the spring of 1852, illness that was to become more common as his life progressed struck; rheumatic fever left him in so much pain that he could not walk. Career[edit] Early years and life[edit] J. J.P. After the 1893 death of Anthony Drexel, the firm was rechristened "J. Modernizing management[edit] Newspapers[edit] U.S.

Paul Tucker Paul Tucker may refer to: Bank of England injects further £75bn into economy 6 October 2011Last updated at 15:11 The governor of the Bank of England, Mervyn King, tells the BBC that quantitative easing will have an effect The Bank of England has said it will inject a further £75bn into the economy through quantitative easing (QE). The Bank has already pumped £200bn into the economy by buying assets such as government bonds, in an attempt to boost lending by commercial banks. But this is the first time it has added to its QE programme since 2009. The Bank also held interest rates at the record low of 0.5%. On Wednesday, data showed the UK economy grew by 0.1% between April and June, which was less than previously thought. "In the United Kingdom, the path of output has been affected by a number of temporary factors, but the available indicators suggest that the underlying rate of growth has also moderated," the Bank said in a statement. "The deterioration in the outlook has made it more likely that inflation will undershoot the 2% target in the medium term.

Bank run American Union Bank, New York City. April 26, 1932. A bank run (also known as a run on the bank) occurs when many clients withdraw their money from a bank, because they believe the bank may cease to function in the near future. In other words, it is when, in a fractional-reserve banking system (where banks normally only keep a small proportion of their assets as cash), numerous customers withdraw cash from deposit accounts with a financial institution at the same time because they believe that the financial institution is, or might become, insolvent; they keep the cash or transfer it into other assets, such as government bonds, precious metals or gemstones. When they transfer funds to another institution, it may be characterized as a capital flight. As a bank run progresses, it generates its own momentum: as more people withdraw cash, the likelihood of default increases, triggering further withdrawals. History[edit] Bank runs have also been used to blackmail individuals or governments.

Bank of England court worried about Mervyn King's politicised role Giving evidence to the Treasury Select Committee on Tuesday, Sir Roger Carr, a member of the court and former chairman of Cadbury, said it was important that Mervyn King was not drawn into politics. "The integrity and credibility of the Bank are absolutely dependent on it not being seen as having a political axe to grind, so that for me is of paramount importance. We have made that very clear to the Governor," said Sir Roger. "What politicians must do is not seek to draw him in, to make it appear he is giving political support," he added. Sir David Lees, chairman of the court and the former chairman of Tate & Lyle, said he was "not terribly comfortable" with the comments made by Mr King in his Newcastle speech. Brendan Barber, another member of the court and the general secretary of the Trades Union Congress, said Mr King could speak "loudly" on "fact-based issues", adding that the Governor should not stray "on to political territory".

Great Depression USA annual real GDP from 1910–60, with the years of the Great Depression (1929–1939) highlighted. The unemployment rate in the US 1910–1960, with the years of the Great Depression (1929–1939) highlighted. In the 21st century, the Great Depression is commonly used as an example of how far the world's economy can decline.[2] The depression originated in the U.S., after the fall in stock prices that began around September 4, 1929, and became worldwide news with the stock market crash of October 29, 1929 (known as Black Tuesday). The Great Depression had devastating effects in countries rich and poor. Cities all around the world were hit hard, especially those dependent on heavy industry. Some economies started to recover by the mid-1930s. Start Even after the Wall Street Crash of 1929, optimism persisted for some time; John D. Together, government and business spent more in the first half of 1930 than in the corresponding period of the previous year. Economic indicators Causes Keynesian Marxist