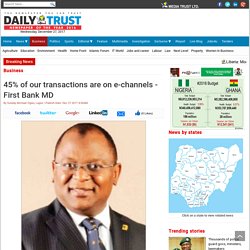 Adesola Kazeem Adeduntan, has been steering affairs at the bank for over two years now, after its challenge regarding non-performing loans. In this interview, the GMD shares the bank management’s effort to reposition it for greater performance, and the giant strides it has recorded in its mobile banking platform. Excerpt: What has been your core focus since you assumed office as First Bank Plc CEO two years ago? At First Bank, our ability to continuously re-invent ourselves is well-ingrained in our DNA.

Today, the bank is undergoing tremendous transformation. Nigeria is just coming out of recession and we are using that opportunity to also build processes and policies that will ensure that whether during the rough or the peak of the economy, this institution will continue to exist. Corporate governance is very important, and the ability to render quality and decent return to our shareholders is also very important to us. UPDATE 1-Nigerian central bank approves licence for development bank. (Adds quote, details) ABUJA, March 29 (Reuters) - Nigeria's central bank has approved a licence for the Development Bank of Nigeria (DBN), the finance ministry said on Wednesday. 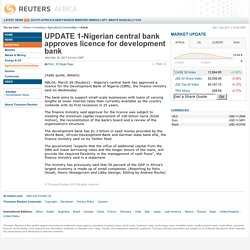 The bank aims to support small-scale businesses with loans of varying lengths at lower interest rates than currently available as the country contends with its first recession in 25 years. Jaiz Bank officially lists on Nigerian Stock Exchange. Jaiz Bank, Nigeria’s first Non-Interest Bank is now a public quoted company further to the listing by introduction of its ordinary shares of N29,464,249,300 of 50kobo each at N1.25 on The Nigerian Stock Exchange’s Daily Official List on 9 February 2016. 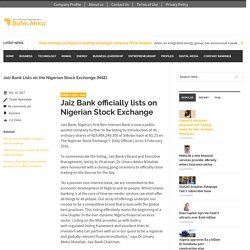 To commemorate the listing, Jaiz Bank’s Board and Executive Management, led by its Chairman, Dr Umaru Abdul Mutallab were honoured with a closing gong ceremony to officially close trading on the bourse for the day. “As a pioneer non-interest bank, we are committed to the economic development of Nigeria and its people. Whilst Islamic banking is at the core of how we render services, we shall offer all things to all people. Our array of offerings underpin our resolve to be a competitive brand that is tune with the global best practices. FIRS nets N27bn from "tax amnesty," registers 814,000 new tax payers - National Accord Newspaper. 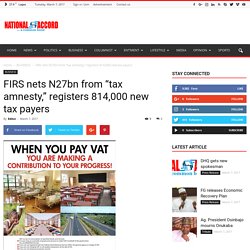 The programme was introduced to allow defaulters regularise their relationship with the agency. Fowler disclosed this on Tuesday in Abuja during the oversight visit by the house of representatives committee on finance, according to a statement issued by Wahab Gbadamosi, the head of communications and servicom department at FIRS. The N27.086 billion came from the tax waiver programme came from the payment of a minimum of 25 per cent of the principal of outstanding tax liabilities between 2013 and 2015 and continued payment of agreed instalments. More revenue is expected from instalmental payments of the principal, Fowler added. As many as 2,735 taxpayers applied under the tax waiver programme. Penalty and interest were waived. Courtesy TheCable. Nigeria’s sovereign wealth rises by over 2,000 per cent - Agency. The Nigeria Sovereign Investment Authority, NSIA, said on Wednesday that income generated from its various investments significantly grew from N5.8 billion in 2015 to about N142 billion (about 2,348.3 per cent) as at September 2016. 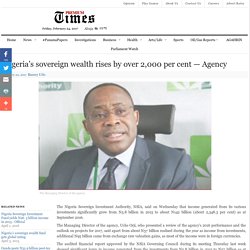 The Managing Director of the agency, Uche Orji, who presented a review of the agency’s 2016 performance and the outlook on projects for 2017, said apart from about N57 billion realised during the year as income from investments, additional N95 billion came from exchange rate valuation gains, as most of the income were in foreign currencies. The audited financial report approved by the NSIA Governing Council during its meeting Thursday last week showed significant jump in income generated from the investments from N5.8 billion in 2015 to N57 billion as at September 2016. “If the exchange rate valuation is included, the figure would rise by an additional N95 billion, bringing total generated income for the year to about N142 billion. During the year, Mr. Nigeria Rules Out IMF Loan Citing Increase In Non-oil Revenue. The Nigerian government has ruled out getting a loan from the International Monetary Fund (IMF), saying the IMF loan may be unnecessary at this time when the country’s non-oil revenue profile was increasing. 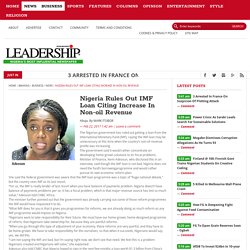 The government said it would rather concentrate on developing home-grown solutions to its fiscal problems. Minister of Finance, Kemi Adeosun, who disclosed this in an interview, said though the IMF loan is not bad, Nigeria does not need the fund’s borrowingprogramme and would rather pursue its own economic reform plan. She said the federal government was aware that the IMF loan programme was a topic of “huge national debate,” but the country sees IMF as its last resort. “For us, the IMF is really lender of last resort when you have balance of payments problem. Nigeria doesn’t have balance of payments problems per se, it has a fiscal problem, which is that major revenue source has lost so much value,” Adeosun told CNBC Africa. Nigeria Spends N5.2tr On Debt Servicing In 6 Years. Nigeria has over the last six and a half years spent N5.197 trillion to pay interest on its debt both at home and abroad, having spent $1.974 billion dollars to service its external debt and another N4.855 trillion to service its domestic obligations. 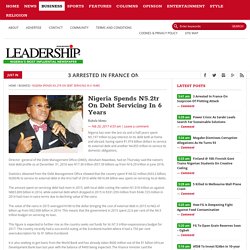 Director -general of the Debt Management Office (DMO), Abraham Nwankwo, had on Thursday said the nation’s total debt profile as at December 31, 2016 was N17.36 trillion ($57.39 billion) up from N16.29 trillion in June 2016. Statistics obtained from the Debt Management Office showed that the country spent $166.02 million (N33.2 billion; N200/$) to service its external debt in the first half of 2016 while N616.68 billion was spent on servicing local debts. Nigeria Spends N5.2tr On Debt Servicing In 6 Years. Nigeria: 20% of Naira in Circulation Is Fake. Nigerians withdraw N4.7 trillion through ATMs in 2016. By Babajide Komolafe THE value of cash withdrawals through Automatic Teller Machines (ATMs) rose sharply to N4.7 trillion in 2016, indicating increasing appetite for cash transactions among Nigerians. 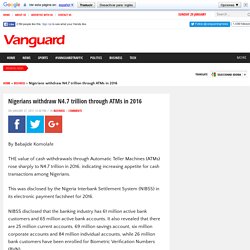 This was disclosed by the Nigeria Interbank Settlement System (NIBSS) in its electronic payment factsheet for 2016. NIBSS disclosed that the banking industry has 61 million active bank customers and 65 million active bank accounts. It also revealed that there are 25 million current accounts, 69 million savings account, six million corporate accounts and 84 million individual accounts, while 26 million bank customers have been enrolled for Biometric Verification Numbers (BVN). Nigeria: 89 Per Cent Nigerian Workers Not On Pension Scheme - Nbs. By Oladeinde Olawoyin More than 89 per cent of Nigerian workers are not registered under the contributory pension scheme, the National Bureau of Statistics, NBS, has said. 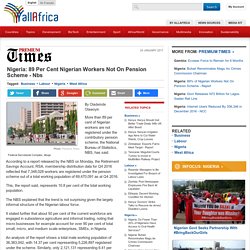 According to a report released by the NBS on Monday, the Retirement Savings Account, RSA, membership distribution data for Q4 2016 reflected that 7,348,028 workers are registered under the pension scheme out of a total working population of 69,470,091 as at Q4 2016. This, the report said, represents 10.8 per cent of the total working population. The NBS explained that the trend is not surprising given the largely informal structure of the Nigerian labour force. It stated further that about 50 per cent of the current workforce are engaged in subsistence agriculture and informal trading, noting that micro businesses for example account for over 90 per cent of total small, micro, and medium scale enterprises, SMEs, in Nigeria. 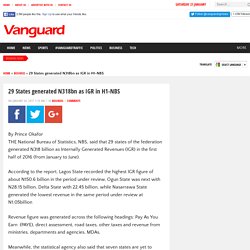 According to the report, Lagos State recorded the highest IGR figure of about N150.6 billion in the period under review, Ogun State was next with N28.15 billion, Delta State with 22.45 billion, while Nasarrawa State generated the lowest revenue in the same period under review at N1.05billion Revenue figure was generated across the following headings: Pay As You Earn (PAYE), direct assessment, road taxes, other taxes and revenue from ministries, departments and agencies, MDAs. Meanwhile, the statistical agency also said that seven states are yet to report their H1 2016 IGR figures. 48% Of Bank Accounts Still Without BVN. More than 48 per cent of deposit money bank (DMB) accounts in the country are still without Bank Verification Number (BVN) with 32.2 per cent of the bank accounts being dormant, as total Number of BVN issued stands at 27.511 million.

According to latest data provided by the Nigeria Inter Bank Settlement System (NIBSS) the custodian of banking industry data, total bank accounts in the country stands at 95.25 million as at November 2016. Of this figure, only 64.61 million accounts are active while the number of accounts with BVN stands at 49.14 million. This shows that 48.4 per cent of total bank accounts and 24 per cent of active bank accounts in the country are still without BVN. Number of accounts linked with BVN had risen from 48.14 million in October last year to 49.14 million in November 2016, the latest data given by NIBSS.

However this was a considerable increase when compared to 21.2 million accounts which had been linked to BVN as at November 2015. 2 Islamic Insurance Firms Begin Operation In Nigeria. Two Islamic (Takaful) insurance companies have commenced operations in the country, thus, becoming the first set of fully-fledged Takaful Insurance companies in Nigeria, LEADERSHIP exclusively learnt. The two companies are Jaiz Takaful Insurance Company, with head office in Abuja, and Noor Takaful Insurance Company Plc based in Lagos State. LEADERSHIP had earlier exclusively reported that two insurance firms will commence operation in the country, latest by 2017. Development Bank of Nigeria completes first recruitment, set to take off.

The Federal Ministry of Finance has confirmed the completion of the recruitment of the Executive Management team of the proposed Development Bank of Nigeria (DBN). The bank has therefore formally applied for the issuance of its operational license from the Central Bank of Nigeria (CBN), which is expected imminently, a statement by the Ministry of Finance, said on Thursday. The DBN was conceived in 2014, but its take-off had been fraught with delays. The Muhammadu Buhari led administration inherited the project and set a target of 2017 for its take-off. Nigerian government to sell N430 billion bond in first quarter 2017. The Nigerian government plans to issue N340 billion to N430 billion of local-currency bonds during the first quarter of 2017. A debt issuance calendar posted on the website of the Debt Management Office, DMO, and obtained by PREMIUM TIMES on Saturday said the office would auction N110 billion to N140 billion worth of bonds maturing in 2021.

The data showed that the government will equally auction N85 billion to N105 billion in debt maturing in 2026. According to the calendar, the debt office will also sell N45 billion to N55 billion in bonds maturing in 2027 and N100 billion to N130 billion to mature in 2036. Naira among four worst global currencies in 2016 - SweetCrudeReports. 30 December 2016, Lagos – The naira is one of the world’s four worst performing currencies in 2016, according to a report by Bloomberg LP. The naira was said to have lost 36.68 per cent of its spot returns for the year, while the Egyptian pound, Suriname dollar and Venezuela bolivar’s currency spot returns dropped by 58.84 per cent, 46.68 per cent and 37 per cent, respectively, for the period. Nigeria's CBN May Legalise Use of Bitcoin For Transactions - NTA.ng - Breaking News, Nigeria, Africa, Worldwide.

The Federal Inland Revenue Service (FIRS) says it has captured over 700,000 fresh companies doing various businesses in various sectors of the Nigerian economy. This is to help the federal government realise tax revenues to fund the economy out of the current recession. The FIRS Chairman, Tunde Fowler, told Reuters that about 10 million individuals on the tax agency’s radar watch may also be compelled to defray their outstanding tax liabilities to government on or before December. The Nigerian government has come under pressure in desperate search for alternative funding for an ambitious $15 billion (N4.72 trillion) fiscal stimulus plan to speed up the economic recovery process. Buhari Approves Borrowing From World Bank, China - Nigeria Today. Naija247news - Nigeria’s foreign debt ups $7.18bn in 10 years.