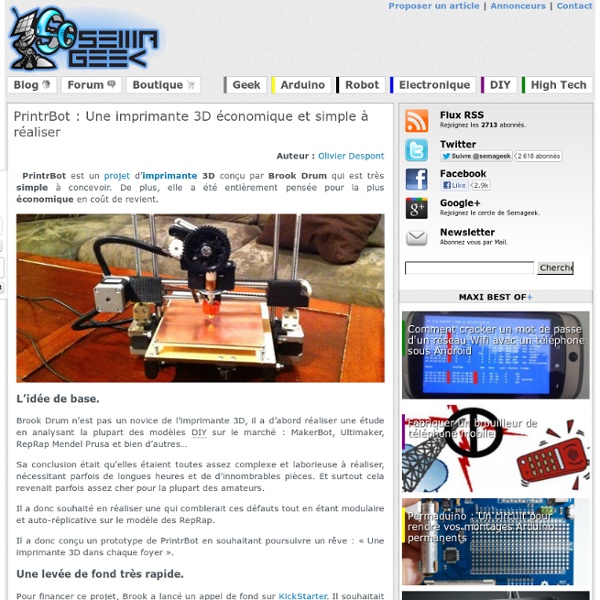 Wiki RepRap is humanity's first general-purpose self-replicating manufacturing machine. RepRap takes the form of a free desktop 3D printer capable of printing plastic objects. Since many parts of RepRap are made from plastic and RepRap prints those parts, RepRap self-replicates by making a kit of itself - a kit that anyone can assemble given time and materials. It also means that - if you've got a RepRap - you can print lots of useful stuff, and you can print another RepRap for a friend... RepRap is about making self-replicating machines, and making them freely available for the benefit of everyone. Reprap.org is a community project, which means you are welcome to edit most pages on this site, or better yet, create new pages of your own. RepRap was the first of the low-cost 3D printers, and the RepRap Project started the open-source 3D printer revolution. RepRap was voted the most significant 3D-printed object in 2017. About | Development | Community | RepRap Machines | Resources | Policy

3D Printed Chocolate Advent Calendar | Hannah Napier 3D Printed Chocolate Advent Calendar | It is time to reveal one of the big projects we have been working on over the past month – a 3D Printed Chocolate Advent Calendar! After collaborating at Brighton Mini Maker Faire, the guys at Moving Brands (MB) asked RepNap for our help in an ambitious end-of-year project of theirs – to print their very own chocolate advent calendar, each piece a personal motif designed by a member of staff, in 6 weeks. As you can imagine, it took a significant amount of persuasion to get me to sign up for the challenge – all of about a millisecond’s worth. Well, they did it, and with oodles of style! Here’s the (slightly epic) story: Exeter University’s chocolate 3D printer made a big splash in the news earlier this year, and I had heard about successful chocolate printing on a Fab@Home machine so knew it would be possible to reproduce on an open-source machine. Training Daniel (picture credit: Moving Brands) First issue – how to fit the Frostruder on a Prusa. The connections needed for each extruder are:

Computers » Pronterface On A Mac Here's a little guide how to run pronterface's latest github version on a Mac, by making sure you have the correct python and python packages installed.This guide not only installs pronterface but also all the other tools in the printrun suite (e.g., the text based pronsole console version). Other options are to download pronterface as a pre-built application (via but this version is seriously outdated (currently over a year old). Also, the documentation to install Printrun on a Mac is very meager and did not work for my box, so this guide may also provide you with some helpful hints. (Disclaimer: I'm not familiar with Python, this is the result of my attempts to get Pronterface running) Make sure your Python is the system version Make sure that Python is the system version that comes with OSX. which python Python should be installed in /usr/bin (not /usr/local/bin or other directories). Make sure that your python is the correct (default) one. Run!

Polygon Reduction with Meshlab - Shapeways There's a limit to the complexity of objects that you can upload to Shapeways: they can have no more than 1 million polygons. More polygons than that quickly become too much work for our servers and printers to handle. Some tools like ZBrush can quickly create a high polycount, so its easy to run into this limit. Fortunately there's a solution known as polygon reduction (also known as mesh decimation). Chances are that your 3D application already has this built-in, otherwise the open source tool MeshLab offers an excellent alternative. The picture below shows the results of a test I did with a small toy car model that had 480,000 faces. Let's get started! If you haven't already done so, please download and install MeshLab and import your model. From the menu, select Filters > Remeshing, simplification and construction > Quadratic Edge Collapse Detection. Here are the option settings we believe to be optimal: Target number of faces - Self explanatory Quality threshold: 1.