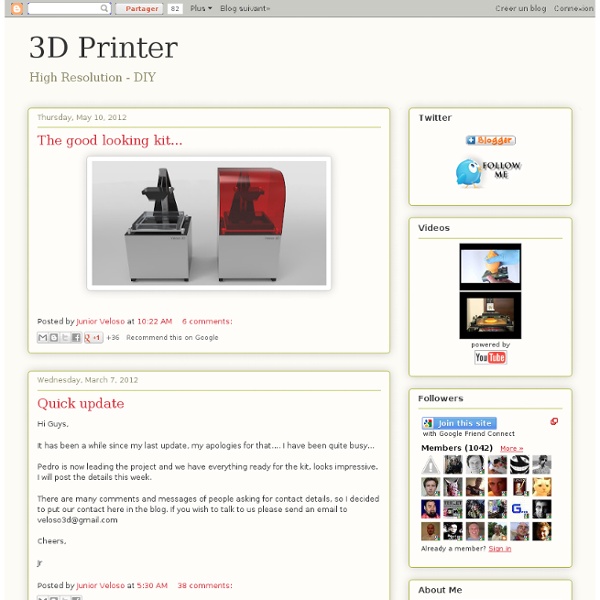 Hi Guys, Again, thank you very much for the interest in the project and all support. We have been working hard to bring this high resolution 3D Printer to all of you. Before our FAQ, I would like to share a really nice thing with you. I printed some amazing bracelets (link) that I found through Google and posted here in our blog, however I didn’t know who created it. I got the comment from him (Jesse Louis-Rosenberg) this week and I am very impressed with their work… check this out… http://n-e-r-v-o-u-s.com/blog/ I hope we can print some more of their work…

Introducing the Aluminatus &quot;TrinityOne&quot; 3d Printer The Aluminatus TrinityOne Nil Satis Nisi Optimum "Nothing But The Best Will Do" Pocket Factory - About In the last several years, 3D printers have become exponentially cheaper and more capable. As these printers become more accessible and ubiquitous, they increasingly answer the question, “How will you make it?” We know how we’ll make things in the future: we’ll press ‘print’. The big question is, “What are you going to make?” That’s the question that we’re trying to answer with the Pocket Factory project: what problems can we solve with a low-cost 3D printer? Can we make things that improve people’s lives?

The Peachy Printer - The First $100 3D Printer & Scanner! by Rinnovated Design Below is a detailed video explaining how the Peachy Printer works through explanation and demonstration! The peachy printer is a Photolithographic printer. That means it uses a controlled beam of light to cure light sensitive resin into hard objects. The peachy moves a laser beam along the X and Y axes to create the shape of the object, while using a drip system to control the level of the resin on the Z axis which determines the height of the object. The object you want to print must first become a 3D model in Blender. The software we wrote as an add on to blender takes the data from that 3D model and translates it into an audio waveform.

AO-101 3D Printer Inventory Alert: The LulzBot TAZ 5 is currently only available on LulzBot.com to ship from Canada and the United Kingdom, and may take 2-6 weeks to arrive if being delivered to the United States. We encourage U.S. customers to buy a LulzBot TAZ 5 today from one of our U.S.-based resellers, including: SparkFun Electronics, MatterHackers, and Amazon.com! New to 3D printing or a home user? 3D Printer UP! functions include: STL input and UP3 output3D viewingModel transform( Move, rotate, scale) Automatic and manual models placement Fast and automatic support generation Model slicingOne-touch printing UP! Interactive Fabrication » Fabricate Yourself Fabricate Yourself is a project that documented the Tangible, Embedded and Embodied Interaction Conference. Usually we think of documentation in terms of text, photography and video, but given the tangible theme of the conference we decided to engage the community by capturing and fabricating small 3D models of attendees. This enabled us to build a tangible model of the event and fabricate it piece by piece during the conference. Attendees firstly capture their favorite pose using a Microsoft Kinect. The depth image from the Kinect is processed into a mesh and displayed onscreen in real-time.

dood présente DOM: Digital Object Maker The project Who are we? We are two childhood friends with complementary skills: mechanical engineering, business, arts, marketing, music, teaching... 3D printing has been a passion of ours for years. We use this technology for personal projects as well as for building prototypes for our clients. 3D Printing Basics Table of contents: 1. What is 3D printing? 3D Printing Well, it's been a while - I haven't updated the 3DLP Host Software since I came out with the first Alpha version back in May. This past weekend I started working on a complete revamp of the software - and when I say revamp, I mean that by the time I'm done, nearly every line will be replaced with better, more robust code. Planned features for the next release of the software include: 3D STL importer/viewer, 3D realtime slicer, re-written Arduino firmware, a new, cleaner GUI, slice previewing, and a manual printer control dialog. I'm also working on an efficient automatic support generation algorithm that I plan on implementing in later releases. Here's a preview of the new 3D interface: Here I've imported an STL model into the 3D viewer, oriented it in 3D space, and sliced the model at a Z height of 0.5.

Advances in 3D Printing We've chosen a selection of articles and videos that showcase advances in 3D Printing technology. Wearable Technology - 3D Printed fabrics - Great video - Courtesy of EcouterreFood Technology - MIT's 3D Food Printer - Cornucopia - Courtesy of Marcelo Coelho MIT3D Printing in Animation - Shows a 3D Printed object used in a Dutch advertising campaign - Courtesy of Creative ReviewPrinting with Silver Ink - Potential for printing integrated Circuits - Courtesy of Singularity HubPrinting with Stainless Steel - A Steel powder is used for 3D Printing - Courtesy of Shapeways and Singularity HubFancy printing a vase? - Well, not quite but its a great start! 3d Printer DLP Software is responsible for the all of the calculations and controls of a 3D printer. A STL file is an input for the software. This 3D model must be sliced into 2D images according to the given layer height. These images will be projected on a photo sensitive resin in order to cure it. The software is also responsible for controlling the motors for the motion. It is better to divide these tasks, so that each task can be done with different software.