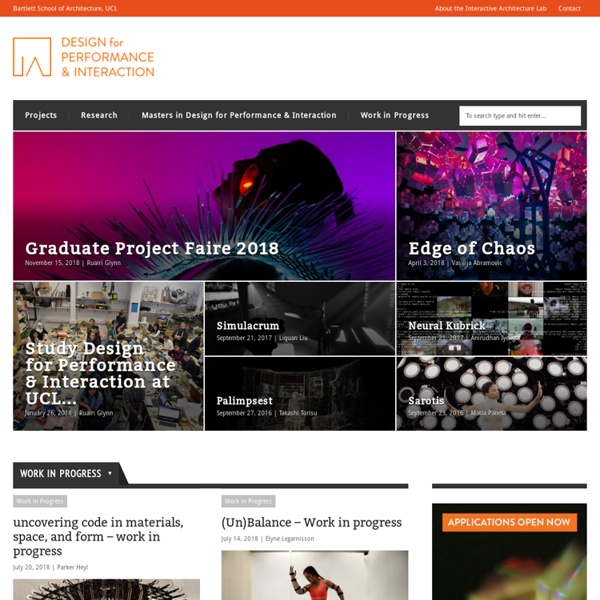 cityofsound The primary interface between the UK’s planning system and the people and places it serves is a piece of A4 paper tied to a lamppost in the rain. OK, not always rain. But rain often enough. The paper is a public notice describing a planning application for some kind of ‘development’ somewhere in the vicinity. If it’s a significant development, and very close to your property, you may also get a notification in the post. However, this bit of A4 paper, via the local council, is essentially the only attempt to communicate how a neighbourhood may be about to change.

Kinetic architecture (1/3) « VANGUARQ Kinetic architecture (1/3) fLUX, Binary Waves – Lab[au] Another great project by LAb[au], “fLUX binary waves” is an urban and cybernetic installation based on the measuring of infrastructural ( passengers, cars…) and communicational ( electromagnetic fields produced by mobile phones, radio…) flows and their transposition into luminous, sonic and kinetic rules.

Interactive Architecture Interactive Architecture In the age of knowledge, architecture is the storyteller. The year was 1969. In what he called an “Unwarranted Apology” for the discipline, architectural theorist Reyner Banham argued that while technological advances have often dictated innovation, architecture has often been late to adapt. Category: Interactive Really interesting projection concepts by NuFormer Digital Media in the Netherlands. NuFormer Digital Media develops high-skill 3D video mapping projections. These 3D projections will be custom-made to fit any specific building and will be exposed by a battery of powerful projectors. More on their website. Read full article » No Comments »

Things to Do In GTA 5 - GTA 5 Wiki Guide EditThere are dozens of musing things to do in the world of GTA 5. Besides the plethora of Main Quests and Side Quests, San Andreas is crammed with ways to whittle away the hours. IGN wants to know what you're up to when you're making your own fun in the GTA 5 sandbox. <a href=" on the poll!</a> Make your choice, check out the results, and then take a look at the dozens of amazing things there are to do in this massive interactive world.

Responsive Architecture Title: WX Category: #materialbehaviour #programmable material Author: Jose Luis Garcia del Castillo, Christian Ervin, and Krista Palen, Harvard Graduate School of Design GTA V: 13 Things You Probably Didn't Know You Could Do – Page 6 The ability to call taxis to transport you to any destination is a wonderful addition to the Grand Theft Auto world: it cuts down on the need to endlessly traipse through boring areas to get to a map point where you know there are goodies, oddities or a mission waiting, and while the game encourages as much interaction with the scenery as possible, short-cuts are a plus point for any game. But the most entertaining thing you can legitimately do with a taxi, according to one Reddit thread, is to channel the lunatic gameplay of Hitmaker/Sega classic Crazy Taxi, by calling for a cab, setting a waypoint up in the mountains (the higher and further off the beaten track, the better) and telling the driver to step on it.

GTA 5 Guide: Things to do in Los Santos We’ve been playing around in Los Santos for quite a while now, discovering all of its secrets, recreational activities and the like. Basically, just having a great time and marvelling at Rockstar Games’s creativity. Just for you, we’ve put together a relatively spoiler-free Los Santos Tour Guide, so you can get the best out of your GTA 5 experience. Feel free to add your own must-sees in the comments section below.

Grand Theft Auto V: 10 Things You Should Do When it finally arrives tomorrow – and yes, it's been a long time coming – Grand Theft Auto V will offer a brave new world for millions of gamers to tackle. Featuring miles of exploration-worthy terrain, three fresh new characters, and hours' worth of missions, the game will be immeasurable when it comes to replay value…and we haven't even gotten into the Online component yet, which is still two weeks away. That said, we've seen a lot of media over the past few weeks – including trailers and screenshots – that give us an idea of exactly what we're in for. We've gone ahead and put together a "bucket list" of ten things you must do when you pick up your copy of the game.