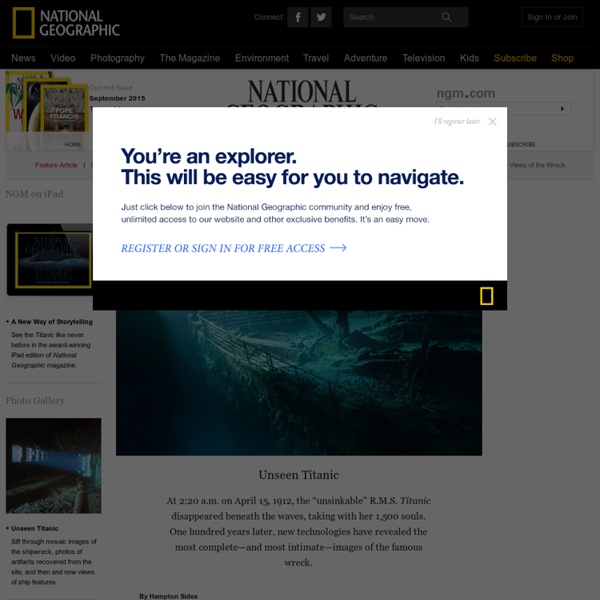 The wreck sleeps in darkness, a puzzlement of corroded steel strewn across a thousand acres of the North Atlantic seabed. Fungi feed on it. Weird colorless life-forms, unfazed by the crushing pressure, prowl its jagged ramparts. From time to time, beginning with the discovery of the wreck in 1985 by Explorer-in-Residence Robert Ballard and Jean-Louis Michel, a robot or a manned submersible has swept over Titanic’s gloomy facets, pinged a sonar beam in its direction, taken some images—and left. In recent years explorers like James Cameron and Paul-Henry Nargeolet have brought back increasingly vivid pictures of the wreck. Yet we’ve mainly glimpsed the site as though through a keyhole, our view limited by the dreck suspended in the water and the ambit of a submersible’s lights. Until now. On closer inspection, though, the site appears to be littered with man-made detritus—a Jackson Pollock-like scattering of lines and spheres, scraps and shards. What is it about the wreck of the R.M.S.

Attractive Italian Viaduct Has Wind Turbines Built In A new bridge concept incorporates wind and solar energy into its design, generating 40 million kilowatt-hours per year — and looking pretty slick to boot. The Solar Wind concept would use the space between an existing viaduct in southern Italy to install 26 wind turbines, which designers Francesco Colarossi, Giovanna Saracino and Luisa Saracino say could provide 36 million kilowatt hours of electricity every year. The design team conceived the Solar Wind project for a contest that aims to repurpose some old, unused viaducts near Calabria, a region in the toe of Italy. It would cost about $55 million to demolish the viaducts, so town officials held a contest for proposals that would re-use them in an environmentally friendly way. The proposal also includes a solar-paneled roadway to provide another 11.2 million kilowatt hours, Colarossi and colleagues say.

Awesome pictures from around the world | Vivi The Mage Someone sent me these in a chain email, it was horribly formatted. I also do not know who made the comments, or how accurate they are. I take zero credit in the pictures, I just wanted to compile them nicely for all to see. The world’s highest chained carousel, located in Vienna, the height of 117 meters. Thor’s Well – “the gates of the dungeon.” Emerald Lake in the crater of an extinct volcano. Restaurant on a cliff on the east coast of Zanzibar.Depending on the tide the restaurant can be reached both on foot and by boat. Office of Selgas Cano in Madrid Desert with Phacelia (Scorpion Weed). Balloons in Cappadocia, Turkey. Dubai. And this is the view down These trees grow in the forest near Gryfino, Poland. The border between Belgium and the Netherlands in a cafe Twice a year in the Gulf of Mexico rays migrate. In the resort town of Skagen you can watch an amazing natural phenomenon. In the Chinese province of Shandong is a bridge across the Gulf of Jiaozhou. Day and night. Family photo Share!

Glow kitties cat Just in time for Halloween, a team of scientists has introduced a new breed of kittens that glow in the dark. They’re cute, cuddly and bright, with fur that shines yellow-green when you turn off the light. But like the bag you carry around for trick-or-treating, it’s what’s inside these cats that counts. The researchers are testing a way to fight a disease that infects cats all over the world, and the kittens’ spooky glow shows that the test is working. The disease is called Feline Immunodeficiency Virus, or FIV. Because HIV and FIV are similar, scientists suspect that if they find a way to fight FIV, they might discover a way to help people with HIV. Eric Poeschla led the study on glowing kittens. A virus (like FIV or HIV) is a tiny particle that finds and attacks cells in the body. Poeschla and his colleagues know that FIV can be stopped — but so far, only in rhesus monkeys. A cell’s genes contain the recipes for all the proteins it needs. molecule A group of atoms bonded together.

An Essay by Einstein -- The World As I See It "How strange is the lot of us mortals! Each of us is here for a brief sojourn; for what purpose he knows not, though he sometimes thinks he senses it. But without deeper reflection one knows from daily life that one exists for other people -- first of all for those upon whose smiles and well-being our own happiness is wholly dependent, and then for the many, unknown to us, to whose destinies we are bound by the ties of sympathy. "I have never looked upon ease and happiness as ends in themselves -- this critical basis I call the ideal of a pigsty. "My passionate sense of social justice and social responsibility has always contrasted oddly with my pronounced lack of need for direct contact with other human beings and human communities. "My political ideal is democracy. "This topic brings me to that worst outcrop of herd life, the military system, which I abhor... "The most beautiful experience we can have is the mysterious. See also Einstein's Third Paradise, an essay by Gerald Holton

Stop fetishizing the scientific paper: Our invited Comment in Nature courtesy Nature If there’s one consistent lesson of covering retractions, it’s that science doesn’t stop when researchers publish a paper. But what also seems true is that once a paper is published, lots of people — authors and editors, in particular — are often reluctant to say just what’s happened next, particularly if it casts the study or the journal in a negative light. Some of this is understandable, given the weight given papers by tenure committees and granting agencies. Still, Retraction Watch readers will not be surprised to know we’d like that to change, so when Nature asked us to contribute an end-of-the-year commentary, we decided to focus on post-publication peer review. What is needed, instead, is a system of publication that is more meritocratic in its evaluation of performance and productivity in the sciences. As it happens, there will soon be a way to do all of that: CrossMark, about to be launched by CrossRef. Like this: Like Loading...

7 Books We Lost to History That Would Have Changed the World The vast majority of the knowledge humans have assembled over the centuries, has been lost. The world's geniuses either kept their revelations to themselves and then died, or else they put it down on paper which has long since rotted or burned or been used to line some parakeet's cage. Obviously we'll never know what great books have been lost to time, but we have clues on some of them, and what those clues tell us is mind-boggling, and a little bit depressing. If you could make a library out of just books that didn't survive, you'd have a collection of some of the best freaking books ever written. The Gospel of Eve, by Unknown What is it: It is apparently a totally sexually perverse lost book of the Bible. (Wait, what? Why it's Awesome: Ah ha! Why You'll Never Read It: In the 4th Century church officials like Epiphanius lashed out at the book, apparently having nothing better to do than stop everyone from having sex and eating a little bit of semen. Heh heh heh. [Artist's depiction.]

Scientist Beams Up a Real 'Star Trek' Tricorder Starships, warp speed, transporters, phasers. Think "Star Trek" technology is only the stuff of fiction? Think again. Dr. Peter Jansen, a Ph.D. graduate of the Cognitive Science Laboratory at McMaster University in Hamilton, Ontario, Canada, has developed a scientific measurement device based on the tricorders used by Captain Kirk, Spock, Dr. McCoy and other space adventurers on the classic TV series that has spawned numerous spin-offs in more than 45 years. "Star Trek inspired me to be a scientist" said Jansen, who has been formally working on his tricorder prototypes since 2007, but toying with the idea of making a functioning device since he was "a kid in high school." The 29-year-old Jansen's school days spanned the late 1990s when "Star Trek: Voyager" was on the air. The first tricorder appeared on the original show's initial episode in 1966, when Capt. Jansen said his tricorder can take atmospheric measurements, or ambient temperature, pressure or humidity. © 2014 Thomson/Reuters.

Branding Basics - 7 Logo Design Tips Have you ever asked yourself why a competitor's business gets more attention than yours? The answer just may have to do with the elements that go into how memorable the business is. And that has to do with branding. But exactly what is branding, anyway? Think of branding as predefining what a company is all about in the minds of its clients. Good branding differentiates your products and services in a positive way that really sticks in the minds of potential customers. Let's say you are getting ready to run errands on a busy Saturday morning, thinking about the groceries that need to be bought, the dry cleaning that needs to be picked up, and the packages that must get to the post office before noon. The answer to that question has everything to do with Hallmark's branding and two key elements of that branding are: a logo design that’s attractive, easy to read and memorable; a great tag line. Assuming your own product is fabulous, it all comes down to image. 7 Logo Design Tips

Windows to the Universe