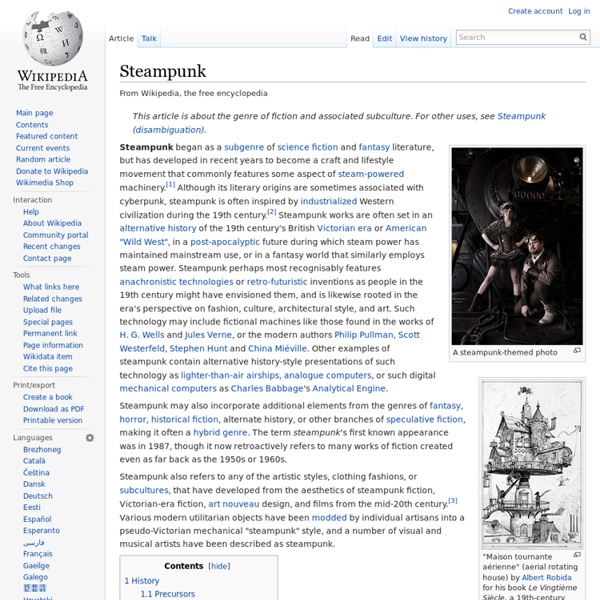 "Maison tournante aérienne" (aerial rotating house) by Albert Robida for his book Le Vingtième Siècle, a 19th-century conception of life in the 20th century Steampunk also refers to any of the artistic styles, clothing fashions, or subcultures, that have developed from the aesthetics of steampunk fiction, Victorian-era fiction, art nouveau design, and films from the mid-20th century.[3] Various modern utilitarian objects have been modded by individual artisans into a pseudo-Victorian mechanical "steampunk" style, and a number of visual and musical artists have been described as steampunk. History[edit] Precursors[edit] Origin of the term[edit] Dear Locus,Enclosed is a copy of my 1979 novel Morlock Night; I'd appreciate your being so good as to route it Faren Miller, as it's a prime piece of evidence in the great debate as to who in "the Powers/Blaylock/Jeter fantasy triumvirate" was writing in the "gonzo-historical manner" first. Modern steampunk[edit] steampunk cafe in Cape Town

Horror Fiction Horror fiction, horror literature and also horror fantasy is a genre of literature, which is intended to, or has the capacity to frighten its readers, scare or startle viewers/readers by inducing feelings of horror and terror. It creates an eerie and frightening atmosphere. Horror can be either supernatural or non-supernatural. Often the central menace of a work of Horror fiction can be interpreted as a metaphor for the larger fears of a society. Castle Falkenstein (role-playing game) Rules and setting are presented in the form of diaries of a number of characters within the game, the main being the author's alter-ego "Tom Olam", a game designer from our world magically transported in New Europa. Best Roleplaying Rules of 1994 Origins Award, Castle Falkenstein, R. Talsorian Games, Mike Pondsmith[1]Best Role-Playing Product of 1995 Nigel D. Findley Memorial Award, Castle Falkenstein[2] The game's system uses playing cards instead of dice to simulate action.

Virginia Woolf Adeline Virginia Woolf (/ˈwʊlf/; nee Stephen; 25 January 1882 – 28 March 1941) was an English writer, and one of the foremost modernists of the twentieth century. During the interwar period, Woolf was a significant figure in London literary society and a central figure in the influential Bloomsbury Group of intellectuals. Her most famous works include the novels Mrs Dalloway (1925), To the Lighthouse (1927) and Orlando (1928), and the book-length essay A Room of One's Own (1929), with its famous dictum, "A woman must have money and a room of her own if she is to write fiction." Woolf suffered from severe bouts of mental illness throughout her life, thought to have been the result of what is now termed bipolar disorder,[1] and committed suicide by drowning in 1941 at the age of 59. Early life[edit] Woolf was educated by her parents in their literate and well-connected household at 22 Hyde Park Gate, Kensington.

Dystopian Fiction The utopia and its offshoot, the dystopia, are genres of literature that explore social and political structures. Utopian fiction is the creation of an ideal society, or utopia, as the setting for a novel. Dystopian fiction (sometimes referred to as apocalyptic literature) is the opposite: creation of an utterly horrible or degraded society that is generally headed to an irreversible oblivion, or dystopia.[1] Many novels combine both, often as a metaphor for the different directions humanity can take in its choices, ending up with one of two possible futures. R. Talsorian Games R. Talsorian Games, based in Renton, WA (until 1997 in Berkeley, California), is a publisher of role-playing game books and accessories. Their titles include the Cyberpunk 2020 series and for anime-related titles such as Dragonball Z.

Josef Mengele "Mengele" redirects here. It is not to be confused with Mengler or Meņģele parish. For the Austrian engineer, see Benno Mengele. Josef Mengele (German: [ˈjoːzɛf ˈmɛŋələ] ( Action Fiction Action is one of the fiction-writing modes authors use to present fiction. Action includes movement, not meaning like standing up, but big movements. The term is also used to describe an exciting event or circumstance. The action genre is a class of creative works characterized by more emphasis on exciting action sequences than on character development or story-telling. The genre encompasses action fiction, action films, action games and analogous media in other formats such as manga and anime. There are many sub-genres, including martial arts action, extreme sports action, car chases and vehicles, suspense action, and action comedy, with each focusing in more detail on its own type and flavour of action.

Cyberpunk 2020 Cyberpunk, mainly known by its second edition title Cyberpunk 2020, is a cyberpunk role-playing game written by Mike Pondsmith and published by R. Talsorian Games as of 1988. Because of the release in 1990 of the second edition, set in a fictional 2020, the first edition is often now referred to as Cyberpunk 2013, following the fictional year, 2013, in which the game was set when it was first released in 1988.