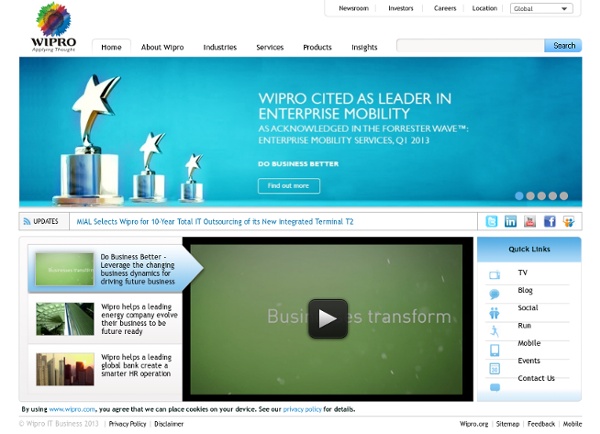 London Metropolitan University in talks to privatise support services Website URL : 15 August 2012 Responding to the news that London Metropolitan University (LMU) is in talks to privatise its support services UCU today warned universities against putting their reputations at risk by entering into partnerships with private firms. The union said the disastrous handling of Olympic security by G4s highlighted the dangers of outsourcing services to for-profit companies. Today's news comes just months after the University Sussex announced plans to transfer 235 staff (more than 10% of its workforce) onto private contractors, as part of a deal that will see the university's catering, estates and facilities and management departments privatised. UCU general secretary, Sally Hunt, said: 'Private companies may seem like an attractive option in the current funding environment.

IDS Scheer AG - Business Process Excellence: Corporate Homepage Fujitsu on-boards customers30 percent faster. Fujitsu Technology Solutions is faster and more agile, thanks to webMethods. Stand out in adigital world. See how Software AG can help yourorganization respond faster and smarter,innovate with momentum and create theultimate customer experience. Consistent data:It’s essential to the Digital Enterprise. Bad data costs $3 trillion a year, experts say. Management Consulting Services | Consulting and System Integration Management Consulting Services Our primary focus is on bridging the gap between business and IT to help clients realize measurable business value from their IT-enabled investments. As a result, we have become one of the fastest growing consultancies in the industry by combining technology lifecycle and vertical industry expertise and experience. Challenges and opportunities There is widespread agreement among business stakeholders and their IT counterparts that innovation and strategic investments in emerging technologies are critical to achieving competitive advantage and delivering shareholder value. The thrust toward on-time, on-budget delivery and cost reduction have left many IT organizations under-funded and ill-prepared to innovate. How Infosys delivers business value Where business, IT, and implementation are separate, we bring them together. Learn more about management consulting offerings from Infosys

London Metropolitan University's visa licence revoked 30 August 2012Last updated at 13:16 ET Emmanuel Egwu, student: "People are panicking. What is going to happen now?" More than 2,000 students potentially face removal after a university had its licence to teach and recruit students from outside the EU revoked. The UK Border Agency (UKBA) says student attendance at London Metropolitan University is not being monitored and that many have no right to be here. As a result, the university will no longer be allowed to authorise visas. The university said it would be challenging UKBA's claims. A task force has been set up to help students affected by the decision which means some 2,000 overseas non-EU students will have to find an alternative institution to sponsor them or they will be told that they will be removed from the UK. The government says it wants to assess how many students will be successfully reallocated to alternative institutions before the UKBA sends out notices giving them 60 days to leave. 'Panic and heartbreak' Analysis

Cognizant | Consulting, Application, IT Infrastructure and BPO Services 'One strike and you're out' sends a damaging message to the world The UKBA's revocation of London Met's licence to accept non-EU students is detrimental to our global reputation, says Eric Thomas It's transformed people's perceptions of the country," said the double-amputee sprinter Oscar Pistorius of the support he and his fellow Paralympic athletes had enjoyed in London, a few moments after smashing the T44 200m world record last Saturday. Just a few miles west, on the Holloway Road, perceptions were also being changed, and not for the better. In the middle of the Olympic and Paralympic period, with the UK on show as a diverse and welcoming country, the decision by the UK Border Agency to revoke London Metropolitan University's licence to recruit and teach international students has sent an extremely damaging message to the world. The decision is particularly frustrating since I know how hard universities have worked to adapt to the frequently changing requirements of the immigration system. For instance, what is attendance monitoring?

Global IT Consulting I Management Consulting I Enterprise Application Services Privatisation nightmare looms at London Metropolitan University|25Aug12 Workers picketing London Metropolitan University during a strike in 2009 (Pic: Guy Smallman) London Metropolitan University looks set to become the first British university taken over by a private company, reports have indicated. Our management, over the last year, has gone out of its way to tout our university services to the private sector—everything except teaching, research and the vice chancellor’s office. They are pushing a so-called “shared service” model, and are at pains to deny it is either outsourcing or privatisation. Bosses argue that “the shared-service facility will be 100 percent owned by London Met”. Management’s emphasis on a “shared service” is key. The bidding for a £74 million contract to run IT, libraries, student services, consultancy and careers advice is now taking place. The costs of shared service models could easily leave the university in a far more vulnerable financial position. Model