‘We are building our way to hell’: tales of gentrification around the world. Amsterdam, the Netherlands: ‘When scarcity is applauded, that’s very wrong’ “Here gentrification happens very quickly. 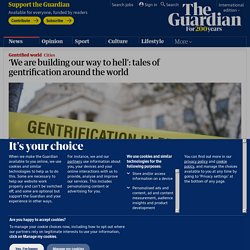 Every month some ‘nice’ restaurant or shop opens. The old name of my neighbourhood (Kinkerbuurt) was changed and rebranded to ‘Hallenkwartier’. I would enjoy many of the changes if I knew others could enjoy it as well. But poor people have to leave, social housing is sold off, and rich people and tourists move in. There was a squatting action, a demonstration and protests against the rebranding of the neighbourhood.

I can’t believe what Amsterdam has become, it was very different 10 years ago (I’ve lived here for 22 years). Montreal, Canada: ‘New restaurants can’t be located near existing ones’ “Various parts of Montreal have been experiencing gentrification. Silicon Valley, US: ‘$1,000 a month rent hikes are not uncommon’ “Gentrification has been business as usual for Silicon Valley for decades. Bath, UK: ‘Gentrification will create huge social unrest’

Housing in london 2014 final. Top 25 Companies Based in London - VLondonCity.co.uk. It’s been said numerous times that London is the financial capital of the world, so it’s no wonder that some of the biggest companies in the world have headquarters here. 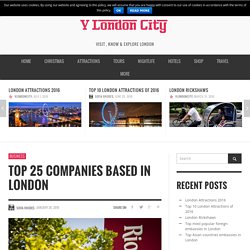 The top 25 companies based in London employ thousands of people in the city, and millions throughout the world. These companies do business in the banking sectors, securities, insurance, oil and gas, etc. While some of the companies on the list are practically household names, there are a few names that are mostly known in certain circles. For example, everyone has heard of British Petroleum (BP), GlaxoSmithKline, but you probably never heard of Unilever, despite it being a major player. Companies such as Google, Microsoft also have large and important offices in the city of London.

The company was originally founded by Thomas Sutherland in 1865, and today it represents one of the largest and single most important banks in the world. Visiting address: Canary Wharf, 8 Canada Square, London Royal Dutch Shell Barclays Aviva. Stratford: then and now - Stratford before the Olympics. It cost £9 billion to bring the Olympic Games to Stratford, and despite years of public apprehension, London’s reaction was unanimous and emphatic: it was so worth it. 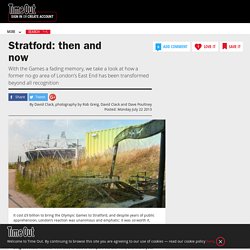 With the Games long since over and the Olympic site in full-on Legacy Mode, we thought it was high time we took a closer look at how those Olympic millions have turned one of London’s most deprived areas into a shiny new postcode to be proud of. Drag the slider handles from side to side to compare old and new, and share your favourite Stratford memories in the comments box below. 'Fridge Mountain', 2006 In pre-Olympic times, Stratford’s 20-foot tall ‘Fridge Mountain’ was one of the area’s most iconic eyesores. Believed to be the biggest collection of discarded white goods in Europe, the pile was the first thing to be shifted when the clean-up started. Waterworks River, 2005 You’d probably still think twice about taking a swim in them, but Startford’s waterways have benefited hugely from Olympic regeneration.

London map reveals the areas where 50% of residents are born abroad. This colourful map of London reveals how vast swathes of the capital are dominated by certain nationalities in a city where one in three people are now born abroad. 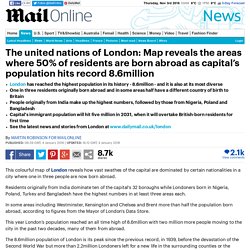 Residents originally from India dominate ten of the capital's 32 boroughs while Londoners born in Nigeria, Poland, Turkey and Bangladesh have the highest numbers in at least three areas each. In some areas including Westminster, Kensington and Chelsea and Brent more than half the population born abroad, according to figures from the Mayor of London's Data Store. This year London’s population reached an all time high of 8.6million with two million more people moving to the city in the past two decades, many of them from abroad. London's population high: Top metropolis facts. Image copyright PA London's population has hit 8.6m people, according to the Greater London Authority - and the last time it was that big was 76 years ago. 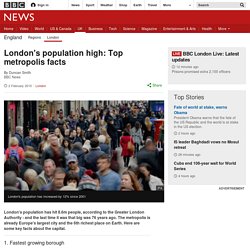 The metropolis is already Europe's largest city and the 6th richest place on Earth. Here are some key facts about the capital. 1. Fastest growing borough Tower Hamlets in east London is expected to see the fastest growth according to the Greater London Authority's (GLA) figures. Image copyright Getty Images 2. Hillingdon is the borough projected to see the largest growth. Image copyright Google 3. To cope with 8.6m Londoners, Thames Water has 10,000 miles of pipes under the city and deals with 4.4bn litres of wastewater per day. Exercise file 2. London in figures - an interactive guide: The knowledge. On a high. LHC Global comparisons research 170914.