London under London. Very cute idea: #Map shows European countries with a population smaller than #London. Metroland. London 1943 plans. London Inheritance. A Walk Round The Festival Of Britain – The Downstream Circuit in my blog post. I've done a comparison of every London borough's street network orientation. (Tnx to @gboeing for the code behind this).… The London Underground map of salaries. London might have looked like this. What do they talk about? - The Festival Of Britain: Maps, Football, Guidebooks. Science And Abram Games in my post. Lost rivers could heat London to cut capital's emissions.

Blue Plaques. The stories behind London's weirdest street names. Chiswick House And Gardens, today's new post at. New at @f_l_o_u_r_i_s_h - now you can make maps of London wards. It's easy & free! I used them to map voting patterns in local elections. Smith Square – Architecture, History, And Reformers. My blog post on this 18th century square. Defending The Thames - Tilbury Fort. Defending The Thames – Tilbury Fort. My blog post about this fort on the river. A London Inheritance - A Private History of a Public City. #OTD 1953: On the day before the Coronation of Queen Elizabeth II, Newsreel reporter Berkeley Smith drove along the Coronation route. This is a fascinating glimpse of 50s London.… Flying Over London - A London Inheritance. Mr Chris sur Twitter : "#OTD 1861 Birth of Henry Croft at St Pancras Workhouse. He was a London road sweeper and founder of the tradition of Pearly Kings and Queens, and tirelessly raised funds for local hospitals etc. He died of lung cancer in the same w.

London in maps. A London Inheritance - A Private History of a Public City. Today's new post - Kenwood House, or Caen Wood. Exploring the house on Hampstead Heath on a very hot May public holiday at. Highgate Station - A Hidden London Tour - A London Inheritance. Blackfriars station has a 'secret' entrance - ever used it? Final version of my #EsriAC dot density map created in @ArcGISPro - understanding spatial patterns in religion across #London. Looking forward to sharing more maps in a few weeks time!…

Greenwich Park from above in 1948. The area behind the Queen's House was turned into allotments during WWII as part of the 'Dig for Victory' effort. Image source. Senate House, the Ministry of Information, Charles Holden & wartime utility fashion. All in today's new post at. A London Inheritance - A Private History of a Public City. Bankside West From Southwark Bridge. My post exploring the view from Southwark Bridge. Secretrsl sur Twitter : "@thamesfriend @liquid_highway1 @ThamesPics Saw these tile carvings when up Deptford Creek earlier today visible from Creek only. Never noticed them before. Need to investigate landside to see what they are unless anyone has any kn.

New Deal For East London - Whitechapel - A London Inheritance. Near Hammersmith Bridge photographed by Izis Bidermanas around 1953… Westminster Bridge with electric trams, London, 1918-1919.… A London Inheritance - A Private History of a Public City. All Hallows Staining And Star Alley in 1948 and 2018. One of the City's earliest stone churches. Today's new post at. London parks used sheep as natural lawnmowers, 1920s.… I give you a map of East London as it was in 1790 including Stratford Le Bow, Hyde Field, Blood House, Lea Bridge and the village of Leyton Stone.… Map Lets You Sail Along The Thames In 1829. Old photos of London including this of the view from the Shot Tower. Today's new post at. Twitter. St. Pancras Old Church, Purchese Street, Gas And Coal Works. A lost square and railway coal depots. My blog post.

⚓️rotherhithetours⚓️ sur Twitter : "Fascinating! Have a look at these fantastic maps by Adam Dant □They tell the story of the Rotherhithe peninsula from early settlements through to the present day ⚓️Look how much has (and hasn't) changed ✨… A London Inheritance - A Private History of a Public City. Centre Point as seen from Denmark Street, 24th August 1966 - not long after it was completed.… 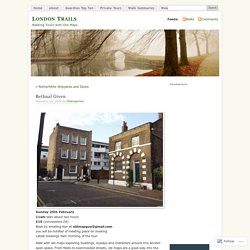 From fields to overcrowded streets, old maps are a good way into the story of this East End neighbourhood. Despite bomb damage and slum clearance there is still much for us to see, like the Good Shepherd Mission, serving the community since 1872 and one of the few churches designed by Sir John Soane. Along the way we encounter Queen Adelaide’s Dispensary, the Parish Watch House and the Mad House on the Green Like this: Like Loading... London Maps - A London Inheritance. To help research London’s history, I have a collection of London maps, built up from when my father purchased his first map of London in 1941, along with collecting maps issued to mark special events in the city over the years. 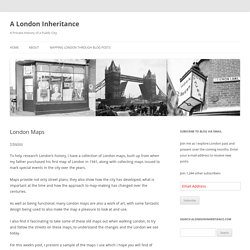 Maps provide not only street plans, they also show how the city has developed, what is important at the time and how the approach to map-making has changed over the centuries. As well as being functional, many London maps are also a work of art, with some fantastic design being used to also make the map a pleasure to look at and use. I also find it fascinating to take some of these old maps out when walking London, to try and follow the streets on these maps, to understand the changes and the London we see today. For this week’s post, I present a sample of the maps I use which I hope you will find of interest. European countries with a population smaller than London… *****Tideless Thames In Future London - A London Inheritance. As well as a large collection of photographs, my father also had a large collection of books about London which he started collecting during the early 1940’s as a young teenager. 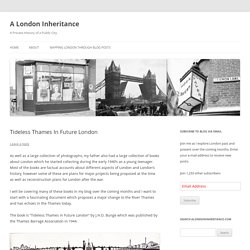 Most of the books are factual accounts about different aspects of London and London’s history, however some of these are plans for major projects being proposed at the time as well as reconstruction plans for London after the war. I will be covering many of these books in my blog over the coming months and I want to start with a fascinating document which proposes a major change to the River Thames and has echoes in the Thames today. *****Early proposals for a Thames Barrage - my post on Tideless Thames In Future London at. The Lambeth Cholera Outbreak of 1848–1849: The Setting, Causes, Course and ... - Amanda J. Thomas. MAPCO Map And Plan Collection Online : The West-End Railway District, London, 1859. Britain: 2017. The big question on everyone's mind is* 'where does London end?' #london #data *probably, I think.

1867 Map of Greenwich, London. 10 October 1971. Sold, dismantled and moved to the USA, London Bridge reopened in Lake Havasu City, Arizona. October 8, 1965: The BT Tower - Britain’s tallest building - opens in London. At 189 metres high, the Post Office Tower literally towered over every other building in the capital when the iconic London landmark now known as the BT Tower opened on this day in 1965. 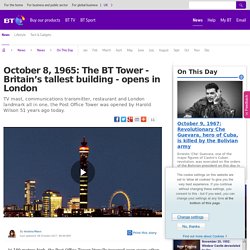 Built from 13,000 tonnes of steel and 4,600 square meters of glass, the tower, as BT Heritage and Archives head David Hay explains in the video above, was commissioned by the General Post Office to support microwave aerials carrying telecommunications transmissions from London to the rest of the country. The tower was designed by architects Eric Bedford and G.

R. Yeats, and its cylindrical shape was chosen because it meant that the building would shift no more than 20cm (or one third of a degree) in high winds – a necessity for the aerials it carried. Construction began in June 1961, with concrete foundations being sunk through 53m of London clay. “My Lord Mayor, I hope you can hear me speaking from London,” said the Prime Minister into the telephone receiver. This is what the Monopoly board looks like with London’s current rent costs and house prices. #Map shows countries with a GDP higher than #London. Source. *****Bridges and Landmarks of London - a clever artwork/map of central London’s riverside scenery & 12 bridges. Unusual perspective! *****Bridges of London: A map with sketches of the 35 above-ground crossings of the Thames within the capital.

Crucial knowledge for #London residents provided by @Londonist. Nomenclature of all types of bollards in the city. Silly but cute! The design process behind my collab with Archie's Press for their London Map. #London #Map #MapMonday. Some great photos of Borough Market! London's defiant market - one month on from the London Bridge attack - *****Great Wen (London nickname) Q From Betty Thaeder, Toronto: I came across a reference in a newspaper last week to the Great Wen, which appeared to be London. 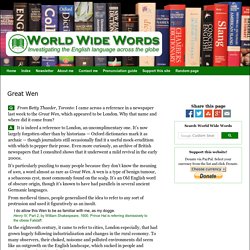 Why that name and where did it come from? A It is indeed a reference to London, an uncomplimentary one. It’s now largely forgotten other than by historians — Oxford dictionaries mark it as archaic — though journalists still occasionally find it a useful mock-eruditism with which to pepper their prose. Even more curiously, an archive of British newspapers that I consulted shows that it underwent a mild revival in the early 2000s.

It’s particularly puzzling to many people because they don’t know the meaning of wen, a word almost as rare as Great Wen. From medieval times, people generalised the idea to refer to any sort of protrusion and used it figuratively as an insult. I do allow this Wen to be as familiar with me, as my dogge. Henry IV, Part 2, by William Shakespeare, 1600. Four Letters on Important National Subjects, by Josiah Tucker, 1783. The Woodcut Map (aka Agas Map) of London, from c.1633 - a very high res scan is online thanks to the MoEML project. Finally got around to making a 'London case study- superfacts' revision guide for @Edexcel_Geog will upload to @Schoology and FB asap. Rush Hour London. The Landlord Octopus, Still Stalking London.

The world’s eight richest billionaires own as much as the poorest half of humanity. 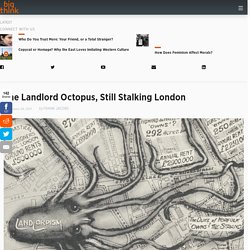 That's 3.5 billion people. Oxfam released that figure just before the global elite had their annual shindig in the snow at the World Economic Forum in Davos. In last year’s press release, it still took 36 billionaires to equal the wealth of the bottom 50%. If wealth concentration continues at this pace, next year it will only take the arm and a leg of a billionaire to own as much as half the world. By that same logic, the previous years were incrementally egalitarian, and you would only need to go back a few decades to reach Equalhalla, that fabled past of fellowship and sharing.

The postcard shows a map of central London, attacked by that staple cartographic monster, the Land Octopus – see also #521. By that time, the Middle Ages were long gone, but large parts of London were still owned and exploited by noble families – to the detriment of ordinary folk. Lord Portman “owns” (?)