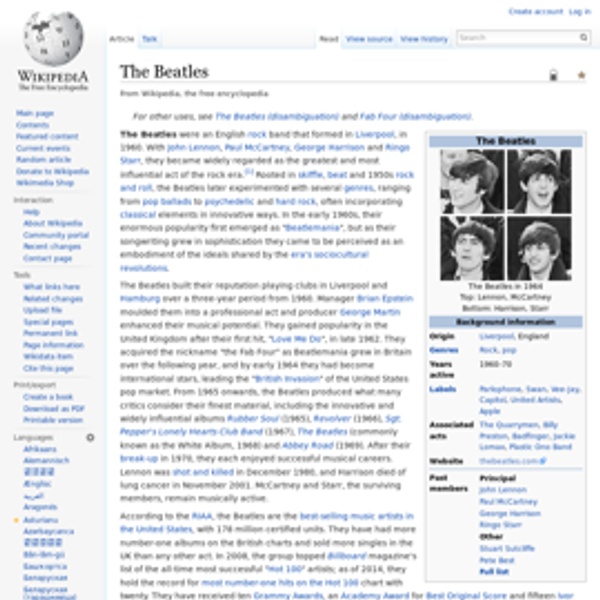 The Beatles were an English rock band that formed in Liverpool, in 1960. With John Lennon, Paul McCartney, George Harrison and Ringo Starr, they became widely regarded as the greatest and most influential act of the rock era.[1] Rooted in skiffle, beat and 1950s rock and roll, the Beatles later experimented with several genres, ranging from pop ballads to psychedelic and hard rock, often incorporating classical elements in innovative ways. In the early 1960s, their enormous popularity first emerged as "Beatlemania", but as their songwriting grew in sophistication they came to be perceived as an embodiment of the ideals shared by the era's sociocultural revolutions. History 1957–62: formation, Hamburg, and UK popularity In March 1957, John Lennon, then aged sixteen, formed a skiffle group with several friends from Quarry Bank school. Koschmider had converted a couple of strip clubs in the district into music venues, and he initially placed the Beatles at the Indra Club. "British Invasion"

Monty Python Monty Python (sometimes known as The Pythons)[2][3] are a British surreal comedy group that created Monty Python's Flying Circus, a British television comedy sketch show that first aired on the BBC on 5 October 1969. Forty-five episodes were made over four series. The Python phenomenon developed from the television series into something larger in scope and impact, spawning touring stage shows, films, numerous albums, several books and a stage musical as well as launching the members to individual stardom. The group's influence on comedy has been compared to The Beatles' influence on music.[4][5][6] The television series, broadcast by the BBC from 1969 to 1974, was conceived, written and performed by members Graham Chapman, John Cleese, Terry Gilliam, Eric Idle, Terry Jones, and Michael Palin.

Forge of Empires Forge of Empires – An Online Strategy Game playable in your browser! Good strategy online games are what Forge of Empires stands for. As a chieftain who founds his settlement anno 5000 B.C. in the Stone Age with little more than a few tents, it is your task to show your online strategy game skills and develop your city through the ages of history in this browser based empire game. New Age The New Age movement is a Western spiritual movement that developed in the second half of the 20th century. Its central precepts have been described as "drawing on both Eastern and Western spiritual and metaphysical traditions and infusing them with influences from self-help and motivational psychology, holistic health, parapsychology, consciousness research and quantum physics".[2] The term New Age refers to the coming astrological Age of Aquarius.[1] The movement aims to create "a spirituality without borders or confining dogmas" that is inclusive and pluralistic.[3] It holds to "a holistic worldview",[4] emphasising that the Mind, Body, and Spirit are interrelated[1] and that there is a form of monism and unity throughout the universe.[5] It attempts to create "a worldview that includes both science and spirituality"[6] and embraces a number of forms of mainstream science as well as other forms of science that are considered fringe.

Nam June Paik Nam June Paik (July 20, 1932 – January 29, 2006) was a Korean American artist. He worked with a variety of media and is considered to be the founder of video art.[1][2] He was married to the video artist Shigeko Kubota in 1965. Paik is credited with an early usage (1974) of the term "electronic super highway" in application to telecommunications.[3] Early life[edit] Born in Seoul in 1932, the youngest of five siblings, Paik had 2 older brothers and 2 older sisters. His father owned a major textile manufacturing firm. History of the hippie movement The hippie subculture began its development as a youth movement in the United States during the early 1960s and then developed around the world. Its origins may be traced to European social movements in the 19th and early 20th century such as Bohemians, and the influence of Eastern religion and spirituality. From around 1967, its fundamental ethos — including harmony with nature, communal living, artistic experimentation particularly in music, and the widespread use of recreational drugs — spread around the world. Precursors[edit] Classical culture[edit] 19th- and early 20th-century Europe[edit]

Joseph Beuys Joseph Beuys (German pronunciation: [ˈjoːzɛf ˈbɔʏs]; 12 May 1921 – 23 January 1986) was a German Fluxus, happening and performance artist as well as a sculptor, installation artist, graphic artist, art theorist and pedagogue of art. His extensive work is grounded in concepts of humanism, social philosophy and anthroposophy; it culminates in his "extended definition of art" and the idea of social sculpture as a gesamtkunstwerk, for which he claimed a creative, participatory role in shaping society and politics. His career was characterized by passionate, even acrimonious public debate, but he is now regarded as one of the most influential artists of the second half of the 20th century.[1][2]

Punk subculture Two UK punks in the 1980s The punk subculture, which centres on punk rock music, includes a diverse array of ideologies, fashions and forms of expression, including visual art, dance, literature and film. The subculture is largely characterized by anti-establishment views and the promotion of individual freedom. The punk subculture emerged in the United Kingdom, Australia, and the United States in the mid-1970s. In the late 1970s, the subculture began to diversify, which led to the proliferation of factions such as new wave, 2 Tone, pop punk, hardcore punk, no wave, street punk and Oi!.

Fluxus Fluxus—a name taken from a Latin word meaning "flow, flux" (noun); "flowing, fluid" (adj.)[1]—is an international network of artists, composers and designers noted for blending different artistic media and disciplines in the 1960s. They have been active in Neo-Dada noise music and visual art as well as literature, urban planning, architecture, and design. Fluxus is sometimes described as intermedia. The Fluxus movement... developed its 'anti-art', anti-commercial aesthetics under the leadership of George Maciunas. Fluxus staged a series of festivals in Paris, Copenhagen, Amsterdam, London and New York, with avant-garde performances often spilling out into the street.

Testimony of integrity Testimony to integrity and truth, refers to the way many members of the Religious Society of Friends (Quakers) testify or bear witness to their belief that one should live a life that is true to God, true to oneself, and true to others. To Friends, the concept of integrity includes personal wholeness and consistency as well as honesty and fair dealings. From personal and inward integrity flow the outward signs of integrity, which include honesty and fairness. It is not only about telling the truth - it is applying ultimate truth to each situation. For example, Friends (Quakers) believe that integrity requires avoiding statements that are technically true but misleading. Dada Dada (/ˈdɑːdɑː/) or Dadaism was an art movement of the European avant-garde in the early 20th century. Dada in Zurich, Switzerland, began in 1916, spreading to Berlin shortly thereafter, but the height of New York Dada was the year before, in 1915.[1] The term anti-art, a precursor to Dada, was coined by Marcel Duchamp around 1913 when he created his first readymades.[2] Dada, in addition to being anti-war, had political affinities with the radical left and was also anti-bourgeois.[3] Francis Picabia, Dame!

Paul Cézanne Paul Cézanne (US /seɪˈzæn/ or UK /sɨˈzæn/; French: [pɔl sezan]; 1839–1906) was a French artist and Post-Impressionist painter whose work laid the foundations of the transition from the 19th-century conception of artistic endeavour to a new and radically different world of art in the 20th century. Cézanne's often repetitive, exploratory brushstrokes are highly characteristic and clearly recognizable. He used planes of colour and small brushstrokes that build up to form complex fields. The paintings convey Cézanne's intense study of his subjects. Cézanne can be said to form the bridge between late 19th-century Impressionism and the early 20th century's new line of artistic enquiry, Cubism. Both Matisse and Picasso are said to have remarked that Cézanne "is the father of us all."

Art manifesto An art manifesto is a public declaration of the intentions, motives, or views of an artist or artistic movement. Manifestos are a standard feature of the various movements in the modernist avant-garde and are still written today. Art manifestos are mostly extreme in their rhetoric and intended for shock value to achieve a revolutionary effect. They often address wider issues, such as the political system. 391 (magazine) 391 was a periodical created and edited by the Dadaist Francis Picabia. It first appeared in January 1917 in Barcelona, and continued to be published until 1924. Picabia was assisted in assembling the magazine by Olga Sacharoff, a Georgian emigre residing in Barcelona. Richter, H.

Smithsonian Resident Associates Program - From R. Mutt to Monty Python: The Meaning and Legacy of Dada Expect the unexpected in this roller-coaster ride of a program full of “ah-ha!” moments. Find your own meanings in the seemingly incomprehensible forms of expression known as Dada. What was going on when Marcel Duchamp submitted , a “readymade” sculpture, to a prestigious art show in 1917? The instantly infamous inverted urinal signed by a comic strip character caused an uproar; two years later, Duchamp displayed a defaced poster of Mona Lisa with a goatee. The horrors of World War I drove many artists and writers to Zurich.