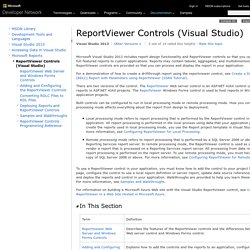 Reports may contain tabular, aggregated, and multidimensional data. ReportViewer controls are provided so that you can process and display the report in your application. For a demonstration of how to create a drillthrough report using the reportviewer control, see Create a Drillthrough (RDLC) Report with Parameters using ReportViewer (SSRS Tutorial). There are two versions of the control. How to: Create and add a character style to a word processing document (Open XML SDK) To use the sample code in this topic, you must install the Open XML SDK 2.5. 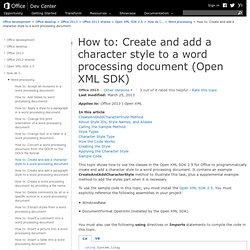 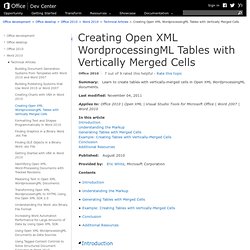 Vertically merging cells in tables in word-processing documents improves readability. For example, in a table that lists invoices for multiple vendors, vertically merging cells that contain the same vendor makes it apparent which invoices are for a given vendor. When you generate documents, you can generate tables that include vertically-merged cells. This article describes the markup and provides an example of generating a table with vertically-merged cells. 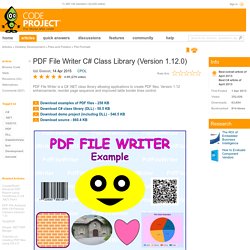 Introduction The PDF File Writer C# class library PdfFileWriter allows you to create PDF files directly from your .net application. The library shields you from the details of the PDF file structure. To use the library, you need to add a reference to the attached PdfFileWriter.dll class library file, add a using PdfFileWriter statement in every source file that is using the library and include the PdfFileWriter.dll with your distribution. For more details go to 2.17 Installation. The PDF File Writer C# class library supports the following PDF document's features: Graphics: drawing lines, rectangles, polygons, Bezier curves, foreground and background color, patterns and shading. A simple C# library for graph plotting. Introduction In our application, we had to display the output of a multichannel ECG (Electro Cardiograph) device. 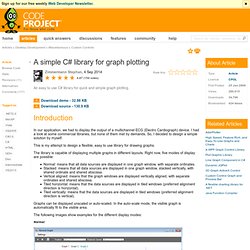 I had a look at some commercial libraries, but none of them met by demands. So, I decided to design a simple solution by myself. This is my attempt to design a flexible, easy to use library for drawing graphs. The library is capable of displaying multiple graphs in different layouts. Normal: means that all data sources are displayed in one graph window, with separate ordinates. OxyPlot.OpenXml 2014.1.319.1. OxyPlot · plotting for .NET. Publicly Available Standards. Welcome to the Open XML SDK 2.5 for Office. Published: December 04, 2012 This content set provides documentation and guidance for the strongly-typed classes in the Open XML SDK 2.5 for Office. 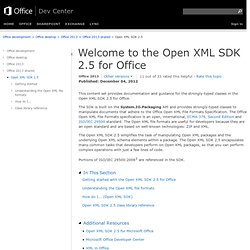 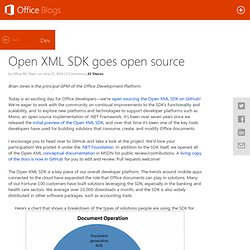 Today is an exciting day for Office developers—we’re open sourcing the Open XML SDK on GitHub! We’re eager to work with the community on continual improvements to the SDK’s functionality and scalability, and to explore new platforms and technologies to support developer platforms such as Mono, an open source implementation of .NET Framework. It’s been over seven years since we released the initial preview of the Open XML SDK, and over that time it’s been one of the key tools developers have used for building solutions that consume, create, and modify Office documents. Welcome to the Word 2013 developer reference. Last modified: October 04, 2012 Applies to: Office 2013 | Word 2013 Welcome to the Microsoft Word 2013Developer Reference. 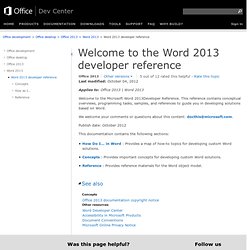 This reference contains conceptual overviews, programming tasks, samples, and references to guide you in developing solutions based on Word. We welcome your comments or questions about this content: docthis@microsoft.com. Publish date: October 2012. How to automate Word from Visual Basic .NET to create a new document. This step-by-step article describes how to create a new document in Word by using Automation from Visual Basic .NET. 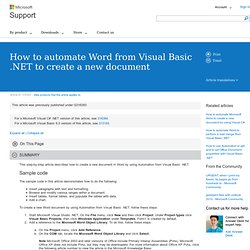 Sample code The sample code in this article demonstrates how to do the following:Insert paragraphs with text and formatting.Browse and modify various ranges within a document.Insert tables, format tables, and populate the tables with data.Add a chart. How to automate Microsoft Word to create a new document by using Visual C# This step-by-step article describes how to create a new document in Microsoft Word by using Automation from Microsoft Visual C# 2005 or Microsoft Visual C# .NET. 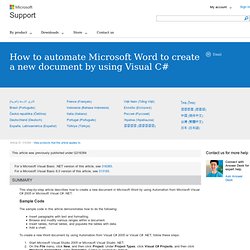 Sample Code Use a Template If you are using Automation to build documents that are all in a common format, you can benefit from starting the process with a new document that is based on a preformatted template. Using a template with your Word Automation client has two significant advantages over building a document from nothing: You can have greater control over the formatting and placement of objects throughout your documents.You can build your documents with less code. By using a template, you can fine-tune the placement of tables, paragraphs, and other objects within the document, as well as include formatting on those objects.