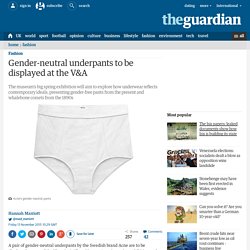 The briefs will be shown as part of Undressed: A Brief History of Underwear, which opens in April. Other stand-out items will include the long cotton drawers worn by Queen Victoria’s mother, a 1960s Mary Quant body stocking and the sheer slip dress by Liza Bruce that was famously worn by Kate Moss in the 1990s. The Acne underpants may not be the frilliest, most sensuous items in the show – they are wilfully anything but – but when they launched, in 2014, they were huge talking points in fashion, interpreted as part a wider trend towards gender fluidity in clothing, and in underwear specifically. Gender-Neutral Parenting Bill Moves Ahead in Israel Knesset. A bill that would allow both parents of newborns to equally share the responsibilities of new parenthood has passed a first reading in the Israeli Knesset. 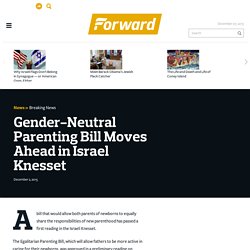 The Egalitarian Parenting Bill, which will allow fathers to be more active in caring for their newborns, was approved in a preliminary reading on Wednesday. The bill, proposed by Rachel Azaria of the Kulanu party, moves to the Labor and Social Welfare Committee for revisions before returning to the Knesset floor for second and third readings. The measure replaces the term “maternity leave” with “childbirth and parenthood time,” and changes “nursing hour,” which allowed new mothers to leave work an hour early for four months after the end of maternity leave, to “parenting hour,” which would allow the father to leave work an hour early — to pick up the child from day care, for example. Toys R Us stops telling boys and girls what to play with by dropping online gender filters. One of the world’s best-known toy retailers has stopped telling girls and boys what they should be playing with, in a victory for parents upset by gender-based marketing. 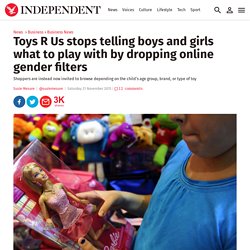 Toys R Us has dropped gender filters from its UK website following complaints that such signposting puts off girls from playing with trains and construction sets. Shoppers are instead invited to browse depending on the child’s age group, brand, or type of toy they are after. Campaigners and politicians have warned that stereotyping can deter girls from studying science and engineering. Toys R Us joins a growing group of retailers from Marks & Spencer and Tesco to Boots and Sainsbury’s that are adopting a more unisex approach.

The shift has occurred in the three years since the pressure group Let Toys be Toys started campaigning. Even these efforts pale compared to the stand taken by one new online retailer, which wants to promote “gender-neutral playtime”. ‘Mx.’? Did The Times Adopt a New, Gender-Neutral Courtesy Title? Photo Philip B. 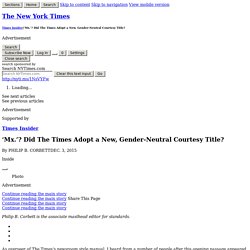 Corbett is the associate masthead editor for standards. As overseer of The Times’s newsroom style manual, I heard from a number of people after this opening passage appeared in a recent Metro article: “Are we anarchist?” Senia Hardwick asked. People inside and outside the newsroom wondered if “Mx.” — an unfamiliar term to many — had suddenly taken its place alongside “Mr.” and “Ms.” in our stylebook’s entry on courtesy titles. The short answer is no. “Mx.,” pronounced “mix,” is a coinage preferred by some transgender people who do not identify as either male or female and so do not want to use “Mr.” or “Ms.”

Like “Ms.” — and unlike the far older and more traditional “Mr.” and “Mrs.” — “Mx.” isn’t an abbreviation of an existing English word, though the echo of the word “mix” seems rather elegant in the context. Our guidelines on transgender references have long advised Times writers to use the names, pronouns and courtesy titles preferred by the subject. #StrongNotSkinny: A positive move towards health, a dangerous slippery slope or just plain narcissistic? It seems commonplace now for our Instagram feeds to be littered with pictures of girls with toned stomachs and gym selfies next to dumbbells. 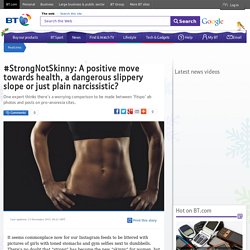 There’s no doubt that “strong” has become the new “skinny” for women, but is it a positive shift towards a focus on health over looking like a runway model, or yet another unhealthy obsession with body image? Accounts like Kayla Itsines has 3.9 million followers and Jen Selter 7.6 million, so enough of us are engaging. Searching hastags like #fitspo, #girlswholift or #girlswholiftarehotter, brings up all the bum, legs and abs shots of women in teeny tiny gym clothes. And with celebrities getting in on the #strongnotskinny action too, and some social media accounts exclusively pumping out “fitspo” pics and clean eating food snaps, it’s all very socially acceptable, even celebrated, to document your every rep and show your results off online. “Women are under a lot of pressure to look a certain way but I try to help people establish their norm.