Sylvia Beach. Sylvia Beach (March 14, 1887 – October 5, 1962), born Nancy Woodbridge Beach, was a American-born bookseller and publisher who lived most of her life in Paris, where she was one of the leading expatriate figures between World War I and II. 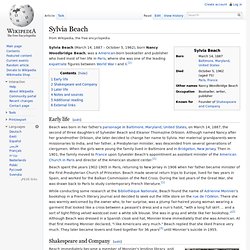 Early life[edit] Beach was born in her father's parsonage in Baltimore, Maryland, United States, on March 14, 1887, the second of three daughters of Sylvester Beach and Eleanor Thomazine Orbison. Although named Nancy after her grandmother Orbison, she later decided to change her name to Sylvia. Her maternal grandparents were missionaries to India, and her father, a Presbyterian minister, was descended from several generations of clergymen. When the girls were young the family lived in Baltimore and in Bridgeton, New Jersey. Shakespeare and Company (bookstore) Interior Shakespeare and Company is the name of two independent bookstores on Paris's Left Bank. 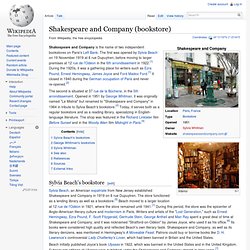 The first was opened by Sylvia Beach on 19 November 1919 at 8 rue Dupuytren, before moving to larger premises at 12 rue de l'Odéon in the 6th arrondissement in 1922. During the 1920s, it was a gathering place for writers such as Ezra Pound, Ernest Hemingway, James Joyce and Ford Madox Ford. It closed in 1940 during the German occupation of Paris and never re-opened. The second is situated at 37 rue de la Bûcherie, in the 5th arrondissement. Sylvia Beach, an American expatriate from New Jersey established Shakespeare and Company in 1919 on 8 rue Dupuytren. The original Shakespeare and Company was closed in 14 June 1940, during the German occupation of France during World War II. In 1951, another English-language bookstore was opened on Paris's Left Bank by an American George Whitman, under the name of Le Mistral. George Whitman died at the age of 98 on December 14, 2011. Lost Generation. The "Lost Generation" was the generation that came of age during World War I. 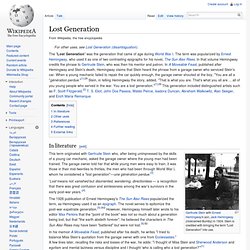 The term was popularized by Ernest Hemingway, who used it as one of two contrasting epigraphs for his novel, The Sun Also Rises. In that volume Hemingway credits the phrase to Gertrude Stein, who was then his mentor and patron. In A Moveable Feast, published after Hemingway and Stein's death, Hemingway claims that Stein heard the phrase from a garage owner who serviced Stein's car.

When a young mechanic failed to repair the car quickly enough, the garage owner shouted at the boy, "You are all a "génération perdue. T. S. Eliot. Edmund Wilson. Malcolm Cowley. Malcolm Cowley (August 24, 1898 – March 27, 1989)[1] was an American novelist, poet, literary critic, and journalist. 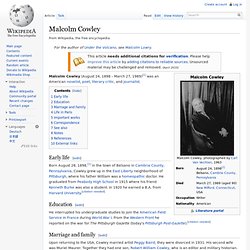 Early life[edit] Education[edit] Marriage and family[edit] Upon returning to the USA, Cowley married artist Peggy Baird; they were divorced in 1931. His second wife was Muriel Maurer. He died of a heart attack March 27, 1989.[1] Life in Paris[edit] Important works[edit] Perhaps the most famous work he wrote was his early book of poetry, Blue Juniata (1929), encouraged by Hart Crane. In 1935 Cowley and other left-wing writers established the League of American Writers. In 1941 President Franklin D.

MacLeish came under pressure from J. Cowley now became literary adviser to Viking Press. Cowley published a revised edition of Exile's Return in 1951. Cowley taught the Stegner Fellowship graduate class at Stanford University in the fall of 1960; among his students were such future luminaries as Ken Kesey, Peter S. Ernest hemingway. Pablo Picasso. Picasso, Henri Matisse and Marcel Duchamp are regarded as the three artists who most defined the revolutionary developments in the plastic arts in the opening decades of the 20th century, responsible for significant developments in painting, sculpture, printmaking and ceramics.[4][5][6][7] Picasso demonstrated extraordinary artistic talent in his early years, painting in a realistic manner through his childhood and adolescence. 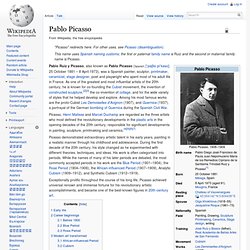 During the first decade of the 20th century, his style changed as he experimented with different theories, techniques, and ideas. His work is often categorised into periods. While the names of many of his later periods are debated, the most commonly accepted periods in his work are the Blue Period (1901–1904), the Rose Period (1904–1906), the African-influenced Period (1907–1909), Analytic Cubism (1909–1912), and Synthetic Cubism (1912–1919). Early life Pablo Picasso and his sister Lola, c.1889 Picasso showed a passion and a skill for drawing from an early age. Fame. Gertrude Stein. Gertrude Stein (February 3, 1874 – July 27, 1946) was an American writer of novels, poetry and plays that eschewed the narrative, linear, and temporal conventions of 19th-century literature, and a fervent collector of Modernist art. 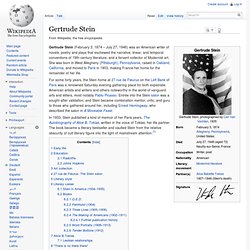 She was born in West Allegheny (Pittsburgh), Pennsylvania, raised in Oakland, California, and moved to Paris in 1903, making France her home for the remainder of her life.