How to Live Without Irony 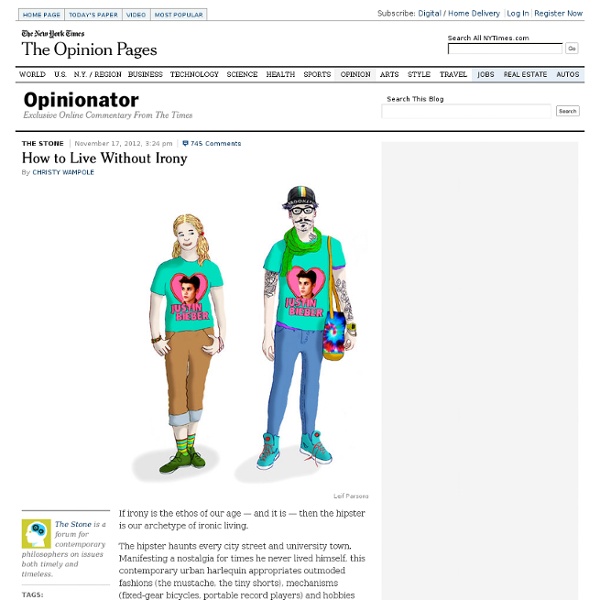 The Rise of the New Groupthink But there’s a problem with this view. Research strongly suggests that people are more creative when they enjoy privacy and freedom from interruption. And the most spectacularly creative people in many fields are often introverted, according to studies by the psychologists Mihaly Csikszentmihalyi and Gregory Feist. They’re extroverted enough to exchange and advance ideas, but see themselves as independent and individualistic.

The Great Belly: A Yogini’s Lament poor belly Consider the poor belly, zipped up and girded, its protuberance detested. It is the underdog of the body yet hardly anyone comes to its defense – not even yogis. The Essayification of Everything The Stone is a forum for contemporary philosophers and other thinkers on issues both timely and timeless. Lately, you may have noticed the spate of articles and books that take interest in the essay as a flexible and very human literary form. These include “The Wayward Essay” and Phillip Lopate’s reflections on the relationship between essay and doubt, and books such as “How to Live,” Sarah Bakewell’s elegant portrait of Montaigne, the 16th-century patriarch of the genre, and an edited volume by Carl H. Klaus and Ned Stuckey-French called “Essayists on the Essay: Montaigne to Our Time.” The essayist samples more than a D.J.: a loop of the epic here, a little lyric replay there, all with a signature scratch on top. It seems that, even in the proliferation of new forms of writing and communication before us, the essay has become a talisman of our times.

Falling Men: On Don DeLillo and Terror, Chris Cumming New York Police officers are seen under a news ticker in Times Square in New York, April 16, 2013. (REUTERS/Brendan McDermid) Some terrorist attacks become cultural obsessions, while others are forgotten completely. There were three bombings in New York City in 1975, none of which I’ve ever heard talked about, each of which would probably shut down the city if it happened now. Global Capitalism with a Human Face? « AC VOICE (Pete Suechting)— Why are charity and environmental conscientiousness so widespread, even fashionable, in today’s society? Back in the 1960’s and even earlier than that, these attitudes were anomalies, only practiced by societal outliers. Before Rachel Carson’s landmark work, Silent Spring, most Americans were unaware that humans could have an adverse and discernible impact on the environment. So, how and why have these attitudes become so prevalent today? Slavoj Zizek, along with the excellent whiteboard animations of the RSAnimate team, attacks the source of this societal transformation with his usual critical, yet deeply perceptive, approach. He arrives at an answer that is surprising: we feel that awareness of our basic societal problems is enough.

Blog » The Best Work in Literature If you’re new here, you may want to subscribe to our RSS feed . Thanks for reading! Photo by Daniel Leininger / Flickr The following post by Manjula Martin ( @manjulamartin ) is part of our online companion to our Spring 2013 issue on The Business of Literature. Click here for an overview of the issue . i. The Joke’s on You Steve Almond [from The Baffler No. 20, 2012] Among the hacks who staff our factories of conventional wisdom, evidence abounds that we are living in a golden age of political comedy. The New York Times nominates Jon Stewart, beloved host of Comedy Central’s Daily Show, as the “most trusted man in America.”

Public Influence: The Immortalization of an Anonymous Death - - News Cover design by Andrew J. Nilsen. Turn on the computer. 10 Lessons on Filmmaking from Director Alejandro Jodorowsky Alejandro Jodorowsky premiered his first directorial feature in 23 years at Cannes this year with the fictionalized autobiographical film The Dance of Reality. The man behind cult favorites El Topo and The Holy Mountain delighted audiences with his magic-realist account of growing up in Tocopilla, Chile. It was met with a standing ovation, and the director called the film’s reception in France one of the proudest moments of his life. The Dance of Reality is marked by fantastic, surreal characters, from an opera-singing mother to an overzealous anarchist to a painted religious guru. It is easy to see how Jodorowsky’s blooming imagination took shape with such a beginning. His own son Brontis Jodorowsky plays his father in the film, an abusive man who dresses as Stalin, forces willpower and manliness upon the young golden-locked Alejandro, and dreams of becoming a communist hero.

Small Talk I recently found myself sitting across a table from a stranger, chewing awkwardly in silence. It was a familiar scenario: a hole-in-the-wall sandwich shop with not enough tables and me sitting alone, assenting readily when an older woman asked if she could share my premium slice of real estate. She sat down and we both began to eat, eyes studiously averted—quickly, the silence became unbearable.

American Anthropological Association: English As She Is Spoke Written by Rosina Lippi Green In discussions about language, prescriptive types generally scorn academic linguists; they see us as language anarchists who reject the very idea of rules. In fact, any linguist will tell you that all human language is structured and rule governed. What linguists and anthropologists object to are pronouncements about good and bad language which are founded in aesthetics, fashion, or prejudice, but served up as objective truths with a side order of superiority. Less important (but still irritating) is the way many prescriptivists get wound up in inane controversies about punctuation, which has nothing to do with spoken language, but still will be filed under "proper grammar."

Related:
Related:  Irony , Satire, sarcasm etc:   -  A Timothy Leary for the Viral Video Age - Ross Andersen - The Atlantic   -  Climate   -  Revisiting why incompetents think they’re awesome | Ars Technica   -  Do You Really Want to Live Forever? - Reason.com   -  In Praise of Leisure - The Chronicle Review - The Chronicle of Higher Education   -  The 'Busy' Trap - The New York Times   -  The Clutter Culture - Feature - UCLA Magazine Online   -  The Death of Postmodernism And Beyond | Issue 58 | Philosophy Now   -  Inner Worlds, Outer Worlds Movie   -  Resonance - Beings of Frequency (documentary film) - YouTube   -  Zeitgeist 2012 – Google   -  Rebecca Solnit · Diary: Google Invades · LRB 7 February 2013   -  Federation Of American Scientists – Science for a safer, more informed world.   -  I’m still here: back online after a year without the internet   -  The Essayification of Everything - NYTimes.com - NYTimes.com   -  The Banality of ‘Don’t Be Evil’ by Julian Assange   -  Breaking News, World News and Video from Al Jazeera   -  How to Clear Negative Energy With Sage & Salt | eHow   -  Hands on History - Ancient Britain: Activities for Families and Groups   -  What is Consciousness?   -  News, sport and opinion from the Guardian's US edition   -  Kids can't use computers... and this is why it should worry you - Coding 2 Learn   -  How to delete your digital life | Tech | The Guardian   -  How Negative Energy Affects Your Life and How to Clear It   -  12 Little Known Laws of Karma (That Will Change Your Life)   -  Fractal Enlightenment | The Basics of I Ching, the Chinese Divination Tool   -  The New York Times - Breaking News, World News & Multimedia   -  Outils pour les médias – Google   -  V3 "Sunrise" 2013   -  TweetDeck   -  Found in the Trash: A Box of Otherworldly Notes | Messy Nessy Chic   -  166 Documentaries To Expand Your Consciousness   -  The Recapitulation Exercise   -  Live Learn Evolve | A Community of Conscious Content   -  We need to talk about TED | Benjamin Bratton | Opinion   -  Home