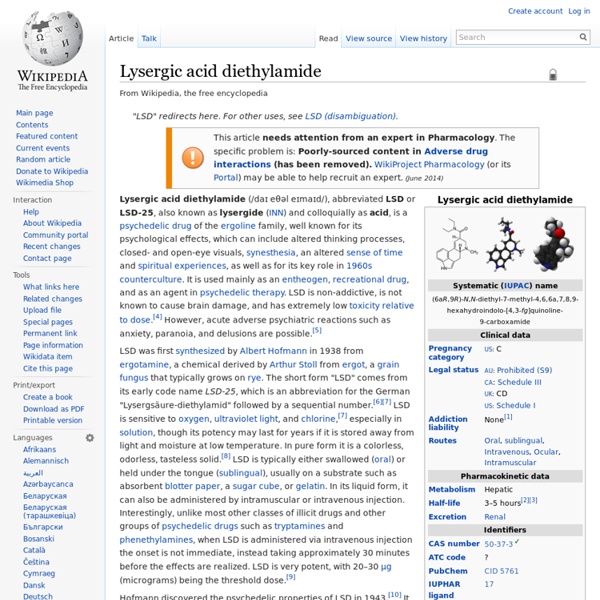 Lysergic acid diethylamide, abbreviated LSD or LSD-25, also known as lysergide (INN) and colloquially as acid, is a semisynthetic psychedelic drug of the ergoline family, well known for its psychological effects which can include altered thinking processes, closed- and open-eye visuals, synesthesia, an altered sense of time and spiritual experiences, as well as for its key role in 1960s counterculture. It is used mainly as an entheogen, recreational drug, and as an agent in psychedelic therapy. LSD is non-addictive, is not known to cause brain damage, and has extremely low toxicity relative to dose.[3] However, acute adverse psychiatric reactions such as anxiety, paranoia, and delusions are possible.[4] LSD was first synthesized by Albert Hofmann in 1938 from ergotamine, a chemical derived by Arthur Stoll from ergot, a grain fungus that typically grows on rye. Effects Physical LSD can cause pupil dilation, reduced or increased appetite, and wakefulness. Psychological Sensory Potential uses

Triterpenoid saponins Triterpenoid saponins are triterpenes which belong to the group of saponin compounds. Triterpenes are a type of terpene containing 30 carbon atoms. Triterpenes are assembled from a five-carbon isoprene unit through the cytosolic mevalonate pathway to make a thirty-carbon compound. Saponin glycosides reduce surface tension of water with foaming and will break down lipids. Triterpenoid saponins in plants[edit] See also[edit] References[edit] ^ Jump up to: a b [1] Robyn Klein Masters Thesis Paper, May 2004, Montana State University, Dept Plant Sciences & Plant Pathology: Phylogenetic and phytochemical characteristics of plant species with adaptogenic propertiesJump up ^ Attele, Anoja S., Wu, Ji An and Yuan, Chun-Su, 1999.

Muscimol Muscimol (agarin, pantherine) is the major psychoactive alkaloid present in many mushrooms of the Amanita genus. Muscimol is a potent, selective agonist for the GABAA receptors and displays sedative-hypnotic effects. Chemistry[edit] Muscimol is the psychoactive compound responsible for the effects of Amanita muscaria intoxication. Ibotenic acid, a neurotoxic secondary metabolite of Amanita muscaria, serves as a prodrug to muscimol when the mushroom is ingested or dried, converting to muscimol via decarboxylation. Biology[edit] Pharmacology[edit] While muscimol is conventionally thought of as a selective GABAA agonist, it is also a partial agonist at the GABAA-rho receptor, and so its range of effects results from a combined action at both targets.[7] In patients with Huntington's disease and chronic schizophrenia, oral doses of muscimol have been found to cause a rise of both prolactin and growth hormone.[8] Toxicity[edit] Effects[edit] See also[edit] Notes[edit] References[edit]

Ergoline Ergoline is a chemical compound whose structural skeleton is contained in a diverse range of alkaloids. Ergoline derivatives are used clinically for the purpose of vasoconstriction (5-HT1 receptor agonists—ergotamine) and in the treatment of migraines (used with caffeine) and Parkinson's disease. Some ergoline alkaloids found in ergot fungi are implicated in the condition ergotism, which causes convulsive and gangrenous symptoms. Others include psychedelic drugs (e.g., LSD and some alkaloids in Ipomoea tricolor and related species[citation needed]). Uses[edit] In addition to the naturally occurring ergonovine (used as an oxytocic) and ergotamine (a vasoconstrictor used to control migraine), synthetic derivatives of importance are the oxytocic methergine, the anti-migraine drugs dihydroergotamine and methysergide, hydergine (a mixture of dihydroergotoxine mesylates, INN: ergoline mesylates), and bromocriptine, used for numerous purposes including treatment of Parkinson's disease.

Ergotamine Ergotamine is an ergopeptine and part of the ergot family of alkaloids; it is structurally and biochemically closely related to ergoline. It possesses structural similarity to several neurotransmitters, and has biological activity as a vasoconstrictor. It is used medicinally for treatment of acute migraine attacks (sometimes in combination with caffeine). Medicinal usage of ergot fungus began in the 16th century to induce childbirth, yet dosage uncertainties discouraged the use. Mechanism of action[edit] Biosynthesis[edit] Ergotamine is a secondary metabolite (natural product) and the principal alkaloid produced by the ergot fungus, Claviceps purpurea, and related fungi in the family Clavicipitaceae.[7] Its biosynthesis in these fungi requires the amino acid L-tryptophan and dimethylallyl diphosphate. Drug uses[edit] Ergotamine produces vasoconstriction peripherally as well as damages the peripheral epithelium. Ergotamine continues to be prescribed for migraines. See also[edit]

Hyoscyamine Brand names for hyoscyamine include Symax, HyoMax, Anaspaz, Egazil, Buwecon, Cystospaz, Levsin, Levbid, Levsinex, Donnamar, NuLev, Spacol T/S and Neoquess. Pharmacology[edit] Hyoscyamine is an antagonist of muscarinic acetylcholine receptors (antimuscarinic). It blocks the action of acetylcholine at parasympathetic sites in sweat glands, salivary glands, stomach secretions, heart muscle, sinoatrial node, smooth muscle in the gastrointestinal tract, and the central nervous system. Biosynthesis in plants[edit] The biosynthesis of scopolamine begins with the decarboxylation of L-ornithine to putrescine by ornithine decarboxylase (EC 4.1.1.17). A putrescine oxidase (EC 1.4.3.10) that specifically recognizes methylated purtrescine catalizes the deamination of this compound to 4-methylaminobutanal which then undergoes a spontaneous ring formation to N-Methyl-pyrrolium cation. Uses[edit] Side effects[edit] Hallucinogenic[edit] References[edit]

Dipropyltryptamine Frequent physical effects are nausea, numbness of the tongue or throat, and pupil dilation. Pharmacology[edit] Studies on rodents have found that the effectiveness with which a selective 5-HT2A receptor antagonist blocks the behavioral actions of this compound strongly suggest that the 5-HT2A receptor is an important site of action for DPT, but the modulatory actions of a 5-HT1A receptor antagonist also imply a 5-HT1A-mediated component to the actions of DPT.[2] Chemistry[edit] DPT changes Ehrlich's reagent purple and causes the marquis reagent to turn yellow.[3] Psychedelic properties[edit] While dipropyltryptamine is chemically similar to dimethyltryptamine, its psychoactive effects are markedly different.[4] The most prominent features of the DPT experience are increased significance or intensity of music, colors take on a new intensity or appearance, the body may have a buzz or vibratory feeling, a pleasant sensation of warmth, complete ego loss, apparitions of faces. Religious use[edit]

Ibogaine Ibogaine is a naturally occurring psychoactive substance found in plants in the Apocynaceae family such as Tabernanthe iboga, Voacanga africana and Tabernaemontana undulata. A psychedelic with dissociative properties, the substance is banned in some countries; in other countries it is used by proponents of psychedelic therapy to treat addiction to methadone, heroin, alcohol, cocaine, methamphetamine, anabolic steroids, and other drugs. Ibogaine is also used to treat depression and post traumatic stress disorder. Derivatives of ibogaine that lack the substance's psychedelic properties are under development.[1] Ibogaine-containing preparations are used for medicinal and ritual purposes within African spiritual traditions of the Bwiti, who claim to have learned it from the Pygmy peoples. Although it was first commonly advertised as having anti-addictive properties in 1962 by Howard Lotsof, its western use predates that by at least a century. History[edit] Synthesis[edit] Psychotherapy[edit]

Atropine In general, atropine counters the "rest and digest" activity of glands regulated by the parasympathetic nervous system. This occurs because atropine is a competitive antagonist of the muscarinic acetylcholine receptors (acetylcholine being the main neurotransmitter used by the parasympathetic nervous system). Atropine dilates the pupils, increases heart rate, and reduces salivation and other secretions. Atropine is a core medicine in the World Health Organization's "Essential Drugs List", which is a list of minimum medical needs for a basic health care system.[1] Name[edit] The species name "belladonna" ("beautiful woman" in Italian) comes from the original use of deadly nightshade to dilate the pupils of the eyes for cosmetic effect. Medical uses[edit] It is a competitive antagonist for the muscarinic acetylcholine receptor types M1, M2, M3, M4 and M5.[2] It is classified as an anticholinergic drug (parasympatholytic). Ophthalmic use[edit] Optical penalization[edit] Resuscitation[edit]

Salvinorin A Salvinorin A is the main active psychotropic molecule in Salvia divinorum, a Mexican plant which has a long history of use as an entheogen by indigenous Mazatec shamans. Salvinorin A is considered a dissociative exhibiting atypically psychedelic effects. Salvinorin A can produce psychoactive experiences in humans with a typical duration of action being several minutes to an hour or so, depending on the method of ingestion.[2] History[edit] Salvinorin A was first described and named in 1982 by Alfredo Ortega and colleagues in Mexico. Pharmacology[edit] Potency and selectivity[edit] Salvinorin A is unique in that it is the only naturally occurring substance known to induce a visionary state via this mode of action; there are synthetic kappa-opioid agonists, (e.g. enadoline, ketazocine, pentazocine and relatives), which show similar hallucinatory and dissociative effects. Effect on intestinal motility[edit] Solubility[edit] Detection in urine[edit] Associated compounds[edit] Synthesis[edit]

Methysergide Methysergide (1-methyl-D-lysergic acid butanolamide or UML-491) is a prescription drug formerly used for prophylaxis of cluster headaches/migraine headaches, but is no longer recommended due to retroperitoneal/retropulmonary fibrosis. Medical uses[edit] Methysergide is used to treat headaches such as migraine and other recurrent throbbing headaches.[1] Methysergide is one of the most effective[2] medications for the prevention of migraine, but not for the treatment of an acute attack. It is also used in carcinoid syndrome to treat severe diarrhea.[1] It may also be used in the treatment of serotonin syndrome.[3] Side effects[edit] It has a known side effect, retroperitoneal fibrosis,[4] which is severe, although uncommon. In addition, there is an increased risk of left-sided cardiac valve dysfunction.[2][5] Pharmacology[edit] Methysergide interacts with serotonin (5-HT) receptors. History[edit] See also[edit] Triptans References[edit] External links[edit]