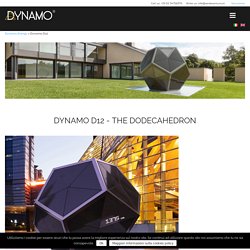 According to Plato, the dodecahedron is the most noble and wonderful regular solids; the first four regular solids have been attributed to the four natural elements. The fifth one, the dodecahedron, was matched to the ether, the grandeur of the universe. Dynamo D12 resumes this unique value to synthesize in its form the power of the four natural elements, providing heating, cooling and electricity: a respectful and sustainable use of the potential offered by nature. 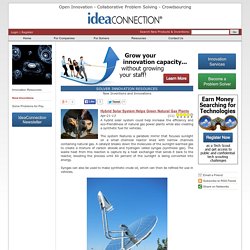 The system features a parabolic mirror that focuses sunlight on a small chemical reactor lined with narrow channels containing natural gas. First Hybrid Wind/Current Turbine Soon to Launch. First Hybrid Wind/Current Turbine Soon to Launch (2)May-18-13 The world’s first hybrid wind-current power generating system is soon to be tested off the Japanese coast, where it could produce twice as much energy as traditional wind turbines. 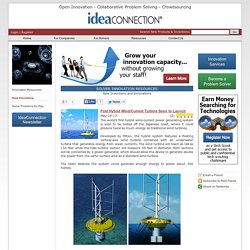 Developed by Mitsui, the hybrid system features a floating vertical-axis wind turbine combined with an underwater turbine that generates energy from ocean currents. The wind turbine will reach as tall as 154 feet while the tidal turbine section will measure 49 feet in diameter. Generating Energy from Water Pressure. Generating Energy from Water Pressure (6)May-20-13 By building a power plant deep beneath the ocean, a team of researchers hopes to generate energy by harnessing the pressure of the ocean water. 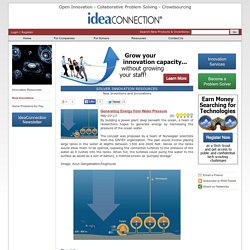 The concept was proposed by a team of Norwegian scientists from the SINTEF organization. The plan would involve placing large tanks in the water at depths between 1300 and 2600 feet. World's First Hybrid Wind/Current Generator. World's First Hybrid Wind/Current Generator (6)Jun-30-13 The SKWID is designed to capitalize on the energy potential available both in the winds above the ocean, and in the currents flowing beneath the waves. 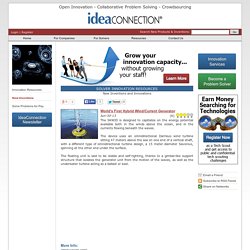 The device uses an omnidirectional Darrieus wind turbine sitting 47 meters above the sea on one end of a vertical shaft, with a different type of omnidirectional turbine design, a 15 meter diameter Savonius, spinning at the other end under the surface. Portable Molten Salt Thermal Reactor. Portable Molten Salt Thermal Reactor (6)Jul-07-13 This invention relates to a Molten Salt Reactor that is a portable plug and go green thermal reactor called the RTMSR. 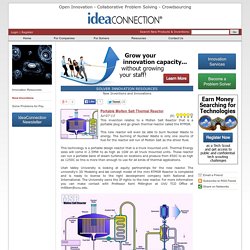 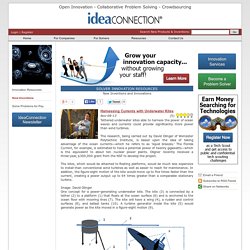 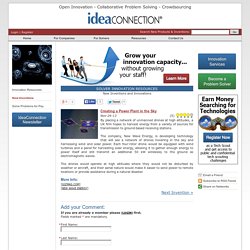 The company, New Wave Energy, is developing technology that will see a network of drones hovering in the sky and harnessing wind and solar power. Each four-rotor drone would be equipped with wind turbines and a panel for harvesting solar energy, allowing it to gather enough energy to power itself and still transmit an additional 50 kW wirelessly to the ground as electromagnetic waves. The drones would operate at high altitudes where they would not be disturbed by weather or aircraft, and their aerial nature would make it easier to send power to remote locations or provide assistance during a natural disaster. 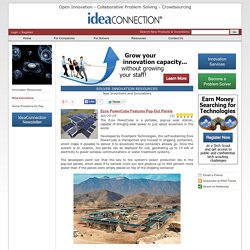 Developed by Ecoshpere Technologies, the self-sustaining Ecos PowerCube is transported and housed in shipping containers, which make it possible to deliver it to anywhere these containers already go. Once the system is on location, the panels can be deployed for use, generating up to 15 kW of electricity to power wireless communications or water treatment systems. 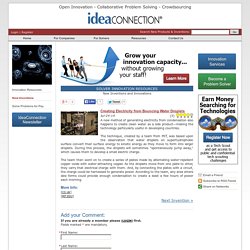 The technique, created by a team from MIT, was based upon the observation that water droplets on superhydrophobic surface convert their surface energy to kinetic energy as they move to form into larger droplets. During this process, the droplets will sometimes "spontaneously jump away," which causes them to develop a small electric charge. The team then went on to create a series of plates made by alternating water-repellent copper oxide with water-attracting copper.

The traditional flue as we know it is replaced by a small warm air grill at the rear of the unit. Timber is one of the worlds most underestimated resources. It is renewable and when grown in plantations for use as firewood in the MiPower International system it provides a massive carbon sink for carbon dioxide helping reduce greenhouse gas emissions. Burning timber for power generation produces much less carbon dioxide than coal and natural gas and it also does not produce significant amounts of nitrous oxides for a cleaner environment.

PLease send us an email for more information. More Info: Add Comment Comments small business? BioFuel-Powered All-In-One Energy System. BioFuel-Powered All-In-One Energy System (3)Aug-06-14 A prototype Biofuel Micro Trigeneration system fueled by unrefined plant oils could provide a new source of power for homes in remote, off-grid areas. The small-scale system is designed for use in homes, and is able to provide cooling, heating and electrical power. WaveNET Harvests Energy from the Waves. WaveNET Harvests Energy from the Waves (3)Nov-28-14 Currently in testing off the Scotland coast, the WaveNET generator from Albatern captures the energy of waves with its array of individual Squid units. Each Squid generator unit can attached to three more to create a large wave energy-harnessing web that becomes more efficient the larger it grows. As the Squid unit bobs on the waves, it moves an arm that links to a central post.

NASA's basement nuclear reactor. If Joseph Zawodny, a senior scientist at NASA’s Langley Research Center, is correct, the future of energy may lie in a nuclear reactor small enough and safe enough to be installed where the home water heater once sat. Using weak nuclear forces that turn nickel and hydrogen into a new source of atomic energy, the process offers a light, portable means of producing tremendous amounts of energy for the amount of fuel used.

It could conceivably power homes, revolutionize transportation and even clean the environment. Currently, nuclear power means one of two approaches. There’s fission, which involves splitting atoms of uranium or plutonium to release energy, and is employed in all military and civilian nuclear plants. Then there’s fusion, which involves forcing together hydrogen atoms to form helium and releasing even more energy. A nickel lattice (Image: NASA) “There are a lot of people who are trying to just build something without understanding anything,” Zawodny said. Water-Repellent Coating Reduces Greenhouse Gases. Water-Repellent Coating Reduces Greenhouse Gases (1)Dec-01-14 A super-repellent coating from the startup DropWise could help make power plants greener by increasing the machinery's suction force. The coating was developed for use on a power plant's steam condenser, a series of pipes that turns steam to water on contact.