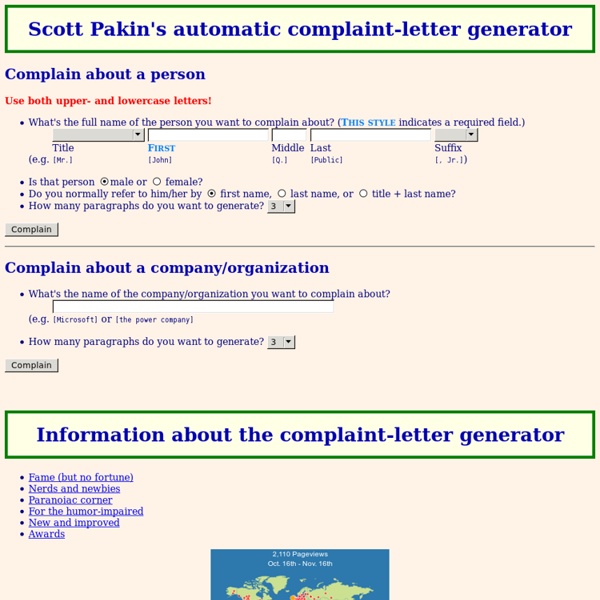 70 Things Every Computer Geek Should Know. | Arrow Webzine The term ‘geek’, once used to label a circus freak, has morphed in meaning over the years. What was once an unusual profession transferred into a word indicating social awkwardness. As time has gone on, the word has yet again morphed to indicate a new type of individual: someone who is obsessive over one (or more) particular subjects, whether it be science, photography, electronics, computers, media, or any other field. A geek is one who isn’t satisfied knowing only the surface facts, but instead has a visceral desire to learn everything possible about a particular subject. A techie geek is usually one who knows a little about everything, and is thus the person family and friends turn to whenever they have a question. If you’re that type of person and are looking for a few extra skills to pick up, or if you’re a newbie aiming to get a handhold on the honor that is geekhood, read on to find out what skills you need to know. How to become a real computer Geek? 1. 2. 3. 4. 5. 6. 7. 8. 9.

10 great science fiction novels that have been banned @djscruffy: And that's why you're a heathen and should be burned at the stake. @djscruffy: In defense of public schools, I would suggest that the reason many of these books are challenged so often is that they're frequently included in school curriculums and libraries. I grew up in a state that, according to these links, engaged in book-burning less than a decade before my birth. That makes me shudder. But I'm also the child of a public school teacher and am familiar with my mother's and many of her peers' views on children's reading materials. Despite the generally conservative views in my community, my elementary school encouraged me to read A Wrinkle in Time and The Giver and Are You There God, It's Me, Margaret. I suppose I've wandered a bit. @djscruffy: To be fair, it's not usually the schools that want to ban the books, but the few overprotective parents who make wild assumptions about the books we try to teach.

Unforgettable Photos 1957. The first day of Dorothy Counts at the Harry Harding High School in the United States. Counts was one of the first black students admitted in the school, and she was no longer able to stand the harassments after 4 days. January 12th, 1960. A second before the Japanese Socialist Party leader Asanuma was murdered by an opponent student. 1963. 1962. 1965. 1966. February 1st, 1968. South Vietnam police chief Nguyen Ngoc Loan shots a young man, whom he suspects to be a Vietkong soldier. 1973. 1975. 1980. Colonel Molina ve military police seizes the Parliament building in Spain. The photographer did not expect the scene, and hid the films in his shoe. 1989. 1994. 2003. The Best Of: Windows Software As a Windows user, you have access to countless free applications. Which ones can you trust and which ones are the best? Consult this list for ideas and discover apps you didn’t know existed. Note that some installers pack bloatware, useless adware that’s pre-selected to install. Antivirus ^ Antivirus software is a cornerstone in protecting your computer from external attacks. The Best Computer Security and Antivirus Tools The Best Computer Security and Antivirus Tools Need a security solution for your PC? Panda Free Antivirus Panda offers a full antivirus, anti adware and anti spyware suite that is light on your computer’s resources. Download: Panda Free Antivirus (Free) Bitdefender Antivirus Free Edition Bitdefender features a simple and dark interface with no options overload. Download: Bitdefender Antivirus Free Edition (Free) Avira Free Antivirus 2018 A Lightweight and solid antivirus package, not just for Windows. Download: Avira Free Antivirus 2018 (Free) Avast and AVG Free AntiVirus

Explanations for everyone. | BetterExplained Wolfram|Alpha—Computational Knowledge Engine France is not just Paris This beautiful country i... - justpaste.it Created: 06/01/2010 Visits: 563160 Online: 1 Office Supplies Blog & packaging templates from japan I’m not sure how I discovered this awesome collection of packaging templates but I’m glad I did! Some professor or student at a japanese univeresity was nice enough to share all their packaging templates with the world! These are a few of my favorites and you can see all of them on their website. Every situation is covered! P.S. stumbleupon

15 Free Guides That Really Teach You USEFUL Stuff Advertisement Over the past months, we’ve written quite a few PDF manuals for you, on all kinds of diverging subjects, including BitTorrent, iTunes, iPhone, Twitter, Mac, Linux, Photoshop and several other topics. Freely available to MakeUseOf subscribers, there are now multiple manuals released every month, for everyone to enjoy. After releasing 15 manuals and nearly half a million downloads we thought it was about time to look back and review what has been published so far. Enjoy! Do us a favor by sharing those manuals friends! 1 – Internet Guide for the Movie Addict Written by Saikat Basu, this entirely free PDF production will show you anything you’ve ever dreamed about knowing related to movies on the web. Original Post | Download NOW 2 – Internet Guidebook for An Audiophile Original Post | Download NOW 3 – The Incredible Free Manual for Every Mac User Original Post | Download NOW 4 – The Underground Guide to the iPhone Written by Stefan Neagu. Update: The guide is no longer available.

P-III autopsy & Sciency stuff For teaching a course I needed to take a closer look at a CPU. I asked around and got my hands on an old P-III Coppermine that was about to get thrown out. I’ll start with a disclaimer: I know virtually nothing about CPUs, so if I claim something to be true, it probably isn’t. The first challenge is to get the actual silicon processor chip off of the plastic bonding board. In the picture below, the blue thing you see is the back side of the processor chip. Click images for full-size. The blue part in the middle is the actual Si chip. Back side of the circuit board containing the CPU. I figured I should be able to remove the chip by heating it. A saw comes in handy sometimes... Below you can see the result. A piece of the processor chip came off. This is the piece that came off. Now the interesting part begins. This is a piece of the processor. Looking closer, we start seeing some structure inside the holes. Focus is on upper layer. Focus is on middle layer. Focus is on bottom layer.

Cast Thermite So you made it through the intro? Good. There's something that must be said before we go any further. I'm not liable. For anything. Now that that's out of the way, onto the fun part. The first thing to do is understand what thermite is made up of. What we need: Fine (0000) Steel Wool (not pictured)AluminumSome kind of scalePlaster of ParisHandling materials (spoon, cup, paper, coffee can...)Some kind of mold to cast your thermite inWhile I'm at it, I'll explain the best way to get a hold of the materials. Steel WoolOff to the hardware store! Finally, you say.