What Is Creativity? Cultural Icons on What Ideation Is and How It Works. The creative spark. How Creativity in Humor, Art, and Science Works: Arthur Koestler's Theory of Bisociation. By Maria Popova “The discoveries of yesterday are the truisms of tomorrow, because we can add to our knowledge but cannot subtract from it.” 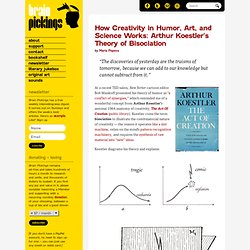 At a recent TED salon, New Yorker cartoon editor Bob Mankoff presented his theory of humor as “a conflict of synergies,” which reminded me of a wonderful concept from Arthur Koestler’s seminal 1964 anatomy of creativity, The Act Of Creation (public library). Koestler coins the term bisociation to illustrate the combinatorial nature of creativity — the reason it operates like a slot machine, relies on the mind’s pattern-recognition machinery, and requires the synthesis of raw material into “new” ideas. How Creativity Works: Neil Gaiman on Where Ideas Comes From. Where do ideas come from? Steven Johnson: Where good ideas come from. David Lynch on Where Ideas Come From and the Fragmentary Nature of Creativity. Dancing About Architecture: A Field Guide to Creativity.

The Art of Thought: Graham Wallas on the Four Stages of Creativity, 1926. By Maria Popova. 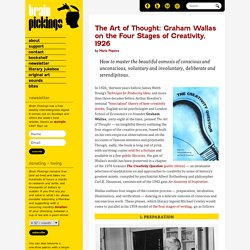 The 10 Stages of the Creative Process. The Hunch Any project starts with a hunch, and you have to act on it. 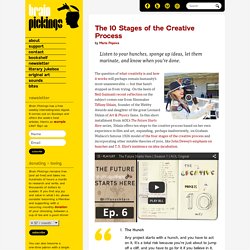 It’s a total risk because you’re just about to jump off a cliff, and you have to go for it if you believe in it. Talk About It Tell your family, tell your friends, tell your community … they’re the ones who are going to support you on this whole treacherous journey of the creative process, so involve them, engage them. The Sponge I’m going to tons of art shows, I’m watching a lot of movies, I’m reading voraciously… and I’m just sponging up ideas and trying to formulate my own idea about the subject. Build I love the world “filmmaker” because it has “maker” in it. Confusion Dread. Just Step Away Take a breather — literally just step away from the project… Let it marinate — don’t look at it or think about it. We need a creativity revolution: four ideas to stir it up.

How do you transform a nation into the most creative place on earth? 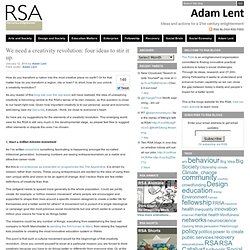 Or for that matter how do you transform a region, city or town? In short, how do you unlock a creativity revolution? Opportunistic Quantum Leaps in Human Evolution. “What is here is elsewhere. 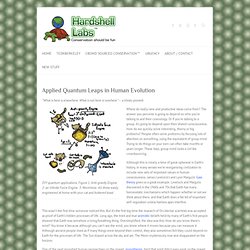 What is not here is nowhere.” – a Hindu proverb DIY quantum applications. Figure 1: Anti-gravity Engine. 2: an Infinite Force Engine. 3: Wormhole. All three easily engineered at home with your cat and buttered toast. Milton Glaser on Art, Technology, and the Secret of Life. By Maria Popova “You learn more and more that everything exists at once with its opposite, so the contradictions of life are never-ending and somehow the mediation between these opposites is the game of life.”

Few things today are truly iconic, but the I♥NY logo is among them. Its beloved creator, the inimitable Milton Glaser — who also co-founded New York Magazine in 1968, and who is one of my most beloved creative and spiritual heroes — is an icon in his own right: often considered the greatest graphic designer alive, a remarkable educator who has shaped lives for more than half a century, a man of uncommon wisdom on art, integrity, and the kindness of the universe.

In this beautiful and wide-ranging interview from The Good Life Project, Glaser offers an unprecedented tour of his magnificent mind and singular spirit. How simple ideas lead to scientific discoveries - Adam Savage. Solving It : TED Radio Hour. A Brief History of Glass and How It Planted the Seed for the Innovation Gap Between the East and West. By Maria Popova “The material world is not just a display of our technology and culture, it is part of us. 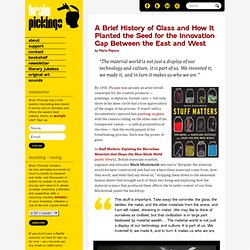 We invented it, we made it, and in turn it makes us who we are.” By 1950, Picasso was already an artist world-renowned for his creative products — paintings, sculptures, bronze casts — but only those in his inner circle had a true appreciation of the magic in his process. It wasn’t until a documentary captured him painting on glass, with the camera rolling on the other side of his transparent canvas — a radical proposition at the time — that the world gasped at his breathtaking process. Such was the power of glass. This stuff is important. Picasso paints on glass, 1950.

Chuck Close on Creativity, Work Ethic, and Problem-Solving vs. Problem-Creating. On Getting Creative Ideas. Legendary Songwriter Carole King on Inspiration vs. Perspiration and How to Overcome Creative Block. By Maria Popova “Once the inspiration comes, that directs where the perspiration goes.” 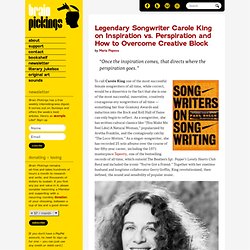 To call Carole King one of the most successful female songwriters of all time, while correct, would be a disservice to the fact that she is one of the most successful, innovative, creatively courageous any songwriters of all time — something her four Grammy Awards and induction into the Rock and Roll Hall of Fame can only begin to reflect. As a songwriter, she has written cultural classics like “(You Make Me Feel Like) A Natural Woman,” popularized by Aretha Franklin, and the contagiously catchy “The Loco-Motion.”

As a singer-songwriter, she has recorded 25 solo albums over the course of her fifty-year career, including the 1971 masterpiece Tapestry, one of the bestselling records of all time, which outsold The Beatles’s Sgt. Pepper’s Lonely Hearts Club Band and included the iconic “You’ve Got a Friend.” That song was as close to pure inspiration as I’ve ever experienced. Donating = Loving. Perseverance, Self-Transcendence, and the “Slow Churn” of Creativity: A Conversation with Artist Rachel Sussman. By Maria Popova How deep time puts our fleeting human lives in perspective, what it takes to persist, and why any meaningful creative endeavor requires sacrifice. 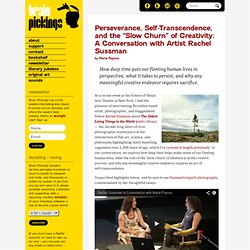 At a recent event at the School of Visual Arts Theater in New York, I had the pleasure of interviewing Brooklyn-based artist, photographer, and Guggenheim Fellow Rachel Sussman about The Oldest Living Things in the World (public library) — her decade-long labor-of-love photographic masterpiece at the intersection of fine art, science, and philosophy highlighting thirty humbling organisms over 2,000 years of age, which I’ve covered at length previously.