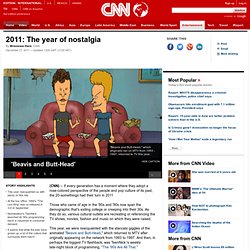 TeenNick launched a '90s programming block this year that brought back shows like "All That. " Nineties groups New Kids on the Block and the Backstreet Boys, now known as the recently formed NKOTBSB, earned $40 million with this year's tour. "The Lion King" was re-released in 3-D after originally bowing in theaters in 1994. Popular '80s show "The Smurfs" was adapted into a summer blockbuster this year. Lisa Frank, popular in the '90s, now sells clothing, some of which is available in adult sizes. 'Beavis and Butt-Head' 'All That' 'The Lion King 3-D' 'The Smurfs' Lisa Frank. Génération Y. The Entrepreneurial Generation. Why the Current Crop of Twentysomethings Are Going to Be Okay. Every generation finds, eventually, a mode of expression that suits it. 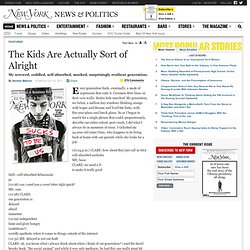 Cavemen drew lines on their cave walls. Sixties kids marched. My generation, we Gchat, a million tiny windows blinking orange with hopes and dreams and YouTube links, with five-year plans and lunch plans. So as I began to search for a single phrase that could, preposterously, describe our entire cohort, post-crash, I did what I always do in moments of crisis. I Gchatted my 24-year-old sister Clare, who happens to be living back at home with our parents while she looks for a job: (10:24 p.m.) I know this might read as very woe-is-us, but these are the facts: Nearly 14 percent of college graduates from the classes of 2006 through 2010 can’t find full-time work, and overall just 55.3 percent of people ages 16 to 29 have jobs. 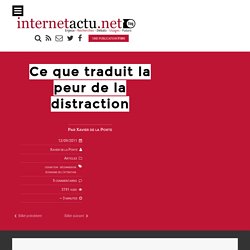 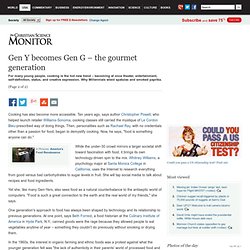 Ten years ago, says author Christopher Powell, who helped launch retailer Williams-Sonoma, cooking classes still carried the mystique of Le Cordon Bleu-prescribed way of doing things. Then, personalities such as Rachael Ray, with no credentials other than a passion for food, began to demystify cooking. Now, he says, "food is something anyone can do. " Subscribe Today to the Monitor Click Here for your FREE 30 DAYS ofThe Christian Science MonitorWeekly Digital Edition While the under-30 crowd mirrors a larger societal shift toward fascination with food, it brings its own technology-driven spin to the mix.

Yet she, like many Gen-Yers, also sees food as a natural counterbalance to the antiseptic world of computers. One generation's approach to food has always been shaped by technology and its relationship to previous generations. The State of Millennials. Gen Y becomes Gen G – the gourmet generation. When not studying anthropology in the library stacks, college student Erica Fedderly can usually be found in one other room – her kitchen. 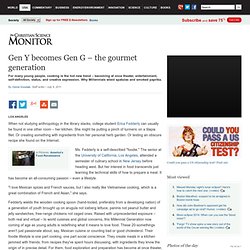 She might be putting a pinch of turmeric on a tilapia filet. Or creating something with ingredients from her personal herb garden. Or testing an obscure recipe she found on the Internet. Skip to next paragraph Subscribe Today to the Monitor Click Here for your FREE 30 DAYS ofThe Christian Science MonitorWeekly Digital Edition Ms. "I love Mexican spices and French sauces, but I also really like Vietnamese cooking, which is a great combination of French and Asian," she says. Fedderly wields the wooden cooking spoon (hand-tooled, preferably from a developing nation) of a generation of youth brought up on arugula not iceberg lettuce, paninis not peanut butter and jelly sandwiches, free-range chickens not caged ones.

Many of them are swelling the classrooms of cooking schools around the country. Meagan Johnson and Larry Johnson: The Rise of the Gen Y 'Sharing Economy' I was an only child and loved it. 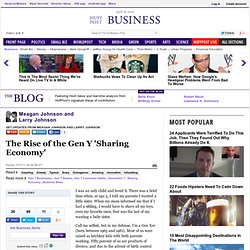 There was a brief time when, at age 5, I told my parents I wanted a little sister. When my mom informed me that if I had a sibling, I would have to share all my toys, even my favorite ones, that was the last of my wanting a baby sister. Call me selfish, but in my defense, I'm a Gen Xer (born between 1965 and 1981). Millennial Grocery Shopping Habits and Marketing Trends. ‘Pay as you drive’ insurance rewards safe young drivers. Gain instant and exclusive access to over 5,000 of the most creative ideas, innovations and startups on our database and use our smart filters to take you direct to those that are most relevant to your industry and your needs. 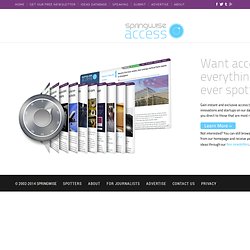