Page. In the decade ahead, unmanned underwater vehicles, or UUVs, may have the same sort of disruptive effects on militaries as their flying counterparts. 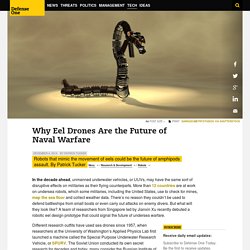 More than 12 countries are at work on undersea robots, which some militaries, including the United States, use to check for mines, map the sea floor and collect weather data. There’s no reason they couldn’t be used to defend battleships from small boats or even carry out attacks on enemy divers. But what will they look like? A team of researchers from Singapore led by Jianxin Xu recently debuted a robotic eel design prototype that could signal the future of undersea warfare.

Different research outfits have used sea drones since 1957, when researchers at the University of Washington’s Applied Physics Lab first launched a machine called the Special Purpose Underwater Research Vehicle, or SPURV. The United States isn’t backing away. The Case for Kill Switches in Military Weaponry. This summer the Iraqi insurgent group ISIS captured the city of Mosul—and along with it, three army divisions' worth of U.S. 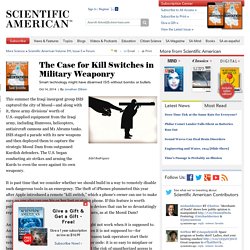 -supplied equipment from the Iraqi army, including Humvees, helicopters, antiaircraft cannons and M1 Abrams tanks. ISIS staged a parade with its new weapons and then deployed them to capture the strategic Mosul Dam from outgunned Kurdish defenders. The U.S. began conducting air strikes and arming the Kurds to even the score against its own weaponry. It is past time that we consider whether we should build in a way to remotely disable such dangerous tools in an emergency. The theft of iPhones plummeted this year after Apple introduced a remote “kill switch,” which a phone's owner can use to make sure no one else can use his or her lost or stolen phone. An immediate worry is whether a kill switch might not work when it is supposed to. But ignition keys represent the best technology of 1949. Animation of How New Missiles May Work - Video. Fearing Bombs That Can Pick Whom to Kill. Photo On a bright fall day last year off the coast of Southern California, an Air Force B-1 bomber launched an experimental missile that may herald the future of warfare. 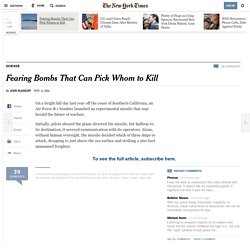 Initially, pilots aboard the plane directed the missile, but halfway to its destination, it severed communication with its operators. Alone, without human oversight, the missile decided which of three ships to attack, dropping to just above the sea surface and striking a 260-foot unmanned freighter. Warfare is increasingly guided by software.

Today, armed drones can be operated by remote pilots peering into video screens thousands of miles from the battlefield. As these weapons become smarter and nimbler, critics fear they will become increasingly difficult for humans to control — or to defend against. U.S. Army Invests Heavily in 3-D Bioprinting to Treat Injured Soldiers. With 3D printing already being utilized by the U.S Army to supply spare parts at source, and possibly provide nutritional snacks for deployed soldiers, the attention has now turned to 3D bio printing, and treating injured soldiers. 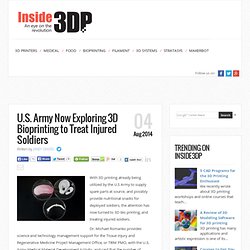 Dr. Michael Romanko provides science and technology management support for the Tissue Injury and Regenerative Medicine Project Management Office, or TIRM PMO, with the U.S. Army Medical Material Development Activity, and said that the number of soldiers now surviving blasts had increased, but unfortunately, so too had their injuries. U.S. military successfully tests missile that picks its own target: What could possibly go wrong? On a bright fall day last year off the coast of Southern California, an Air Force B-1 bomber launched an experimental missile that may herald the future of warfare. 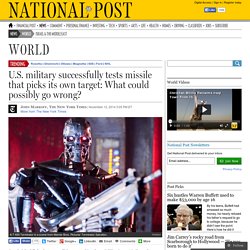 Initially, pilots aboard the plane directed the missile, but halfway to its destination it severed communication with its operators. Alone, without human oversight, the missile decided which of three ships to attack, dropping to just above the sea surface and striking a 260-foot unmanned freighter. The test was deemed a military success. But the design of this new missile and other weapons that can pick targets on their own has stirred protests from some analysts and scientists, who fear that an ethical boundary is being crossed. The Future US Army Soldier!! 5GWTF: The Post-Everything Future of War. Posted Jul 22, 2012 5 comments On the auspicious date of August 17th, 2011, Barack Obama was looking ahead. 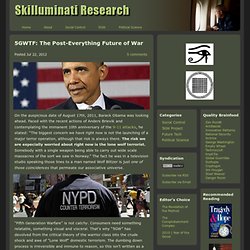 Faced with the recent actions of Anders Brievik and contemplating the immanent 10th anniversary of the 9-11 attacks, he stated: “The biggest concern we have right now is not the launching of a major terror operation, although that risk is always there. The risk we are especially worried about right now is the lone wolf terrorist. Somebody with a single weapon being able to carry out wide scale massacres of the sort we saw in Norway.” The fact he was in a television studio speaking those lines to a man named Wolf Blitzer is just one of those coincidences that permeate our associative universe. "Fifth Generation Warfare" is not catchy.

"...the United States is at a moment of transitioning from traditional and separated disciplines in the national security space to the world of highly integrated, multifaceted and sophisticated 5GW. Nobody saw him coming. Filed in: 5GW Project. The world’s 5 richest terrorist groups « Money Jihad.