Fledgling 2005 - On the Cutting Edge Exhibition 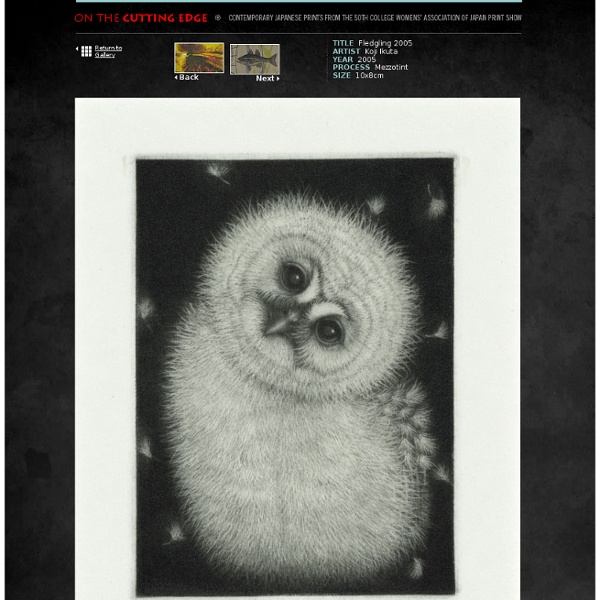 Rajacenna Draws Celebrity Portraits Rajacenna is an 18-year-old self-taught artist from the Netherlands who draws the most realistic portraits I have ever seen, using only pencils. I’m a big fan of realistic drawings, and I’ve previously featured amazing works like the pencil drawings of Paul Lung, the ballpoint pen portraits of Juan Francisco Casas, or Cristina Penescu’s detailed scratchboard masterpieces, but at only 18 years of age Rajacenna is in a league of her own. Born in 1993, she started modelling for various Dutch companies when she was only 4, and at 5 years old she made her first appearance on television. She starred in films, soap-operas and tv-series and at 12 she became the host of Kinderjournaal, the first Dutch web-tv for kids. She only took up drawing in 2009, and although she had never taken any art classes she produced some stunning pieces. Reddit Stumble

Now thats how to doodle: The incredible pictures that look like photographs drawn with a ball point pen By Leon Watson Published: 09:43 GMT, 24 August 2012 | Updated: 13:51 GMT, 24 August 2012 If you think these incredible images are photos, think again. They are in fact probably the world's most intricate doodles. It may be hard to hard to believe but the pictures below are created using standard ballpoint pens bought from places like Staples, eBay, Amazon and, the artist says, any good office supply store. They're drawn by Portugal-based attorney Samuel Silva, who describes his art as a hobby. Like a photo: Portugal-based attorney Samuel Silva, 29, describes his art as a hobby Silva has drawn images of wildlife, recreated masterpieces like Vermeer's Girl with a Pearl Earring and copied iconic photos so accurately they're almost indistinguishable from the original. For his Redhead Girl, based on a photograph by Russian photographer Kristina Taraina, the 29-year-old used six different colored ballpoint pens which took some 30 hours to finish. This was Silva's first ever picture of a jaguar.

ben heine: pencil vs. camera may 25, 2011 ben heine: pencil vs. camera ‘pencil vs. camera’ by ben heine image © ben heine ‘pencil vs. camera’ by ivory coast-born brussels-based photographer ben heine is a series of images that inject hand-drawn pictures within real-life settings to create a composite effect that is often surreal and highly narrative. manipulating the backdrop to host added elements such as real-life tetris blocks, floating speech bubbles, and an alcoholic panda, the photographs are an exercise in manual photoshop, always including heine’s hand which holds up the sketched piece of paper in the foreground. alarmingly accurate and crisply focused, the series puts great care in the alignment and perspective required to successfully pull off the optical illusion. heine creates seemingly effortless snapshots that are highly imaginative and contextual. image © ben heine via mymodernmet erika kim I designboom

VoiceDraw VoiceDraw is a drawing program designed to be controlled using only one's voice. Since no mouse, keyboard or stylus is required, it can be used by people with various forms of motor impairments to express themselves creatively. VoiceDraw is built upon the Vocal Joystick engine in order to process "non-linguistic vocal parameters" in addition to traditional speech recognition for providing continuous and fluid control of the virtual brush. Non-linguistic vocal parameters are voice features that do not correspond to a particular word or phrase in a language, such as changes in loudness, pitch, and vowel quality. A video demonstrating the features of VoiceDraw can be found here: The following is an artwork was created by the first author using VoiceDraw, taking approximately 2.5 hours. The following two pieces were created by Philip Martin Chavez, who refers to himself as an "Electronic Voice Painter." The artwork on the left was created by Mr. S.

Lessons Drawspace Pro Lessons are designed for artists of all levels and educators, and are logically organized into resources and activities. Eventually, all lessons and E-books authored by Brenda Hoddinott will be available here: four to eight brand new lessons and newly-revised older lessons are being added every month! Upgrade Now: Download all 310 lessons and 4 e-books! Try for Free: Download lessons marked as "Free"! 1.1.R1 Glossary Of Art Terms Definitions of art-related terms used in the resources and activities of Drawspace Curriculum (updated February 2013) $3.99or Upgradeto access all files 1.1.R2 Travelling Back in Time with Graphite A few fun tidbits of information about the history of graphite $0.99or Upgradeto access all files 1.1.R3 Examining Graphite and Grades Understanding the differences between H and B grades of graphite $0.99or Upgradeto access all files 1.1.R4 Seeing Grades in Drawings Graphite drawings demonstrate the visual qualities of H and B grades of pencils Download Download

The hand The hands are a notorious source of frustration. This section won't concentrate on the muscle structure, since the hand is very complex in this regard, and knowing this won't help much in drawing them. Instead, we'll look at proportions, range of motion, and possible simplifications. Structure and proportions Figure 2.20. Bone structure and proportions of the hand There is a very easy and surprisingly accurate way to remember the proportions of an adult's hand. The palm of the hand houses the metacarpal bones. The palm of the hand can be simplified to a box. Figure 2.21. Notice that the box does not line up with the contour of the fingers. The two black arrows in the previous figure show how the little finger can move up and down. Figure 2.22. Take a look at some examples of how to use this model: Figure 2.23. The first one is a relaxed pose. This is certainly not the only way to draw a hand.

Crosshatching Crosshatching is the layering of planes of parallel lines on top of each other in order to create a gradient or texture in a drawing. Crosshatching has an "old-fashioned" stigma, probably for good reason: drawing lines side-by-side, and then on top of each other, is a great solution to a problem inherent in pen & ink drawing and printmaking: How do you make a drawing tonal if all you have to work with is black and white? With digital tools at our disposal, as well as relatively new products like Zipotone, Craftint and DuoShade, it's easy to see why crosshatching isn't considered cutting edge. However, I don't personally believe that a technique in itself can be old-fashioned; I think that comes out of how the artist uses the technique. Below is a primer on crosshatching for the beginner or for those who want to hone their craft. Styles of Crosshatching1) Tight, accurate lines. GradientsTwo kinds of gradients below. Consistency Consistent line weight. Labels: Tips and Tricks

Foreshortening Tricks Hi folks! Tutorial Tuesday is going to be a basic one – I’m a bit under the weather currently so this may not be the best post, but I want to give you something that I feel is important in the world of drawing – some pointers on foreshortening. Check this out. Foreshortening is basically an optical illusion created from a compressed looking drawing in perspective. There’s several ways artists choose to render their drawings using foreshortening. Receding Plane Technique Scruffy Ronin uses a method that relies on a drawing a flat plane that recedes into space as a boundary. Five Points in Foreshortening Here’s another basic set of rules you should follow when working with foreshortening. Size, Overlapping Shapes, and Surfaces This brief little tutorial from Gene Kelly illustrates some quick and easy methods to apply the “textbook” techniques that I showed above. Blocks and Circles There you have it – tutorials within a tutorial (sort of). See you next week.

How To Draw Expressions Boy, I didn't know what I was getting myself into when I started this. I've had requests for some sort of expressions tutorial dating back a while now, so I figured, "Sure! I can explain expression drawing...and it'll be way better than all those tutorials out there that are nothing but charts of generic expressions. Yeah! Just give me a day or two to whip something up..." Um. Anyway, I found all I could really do was try to explain ways to teach yourself...and then add some pictures.