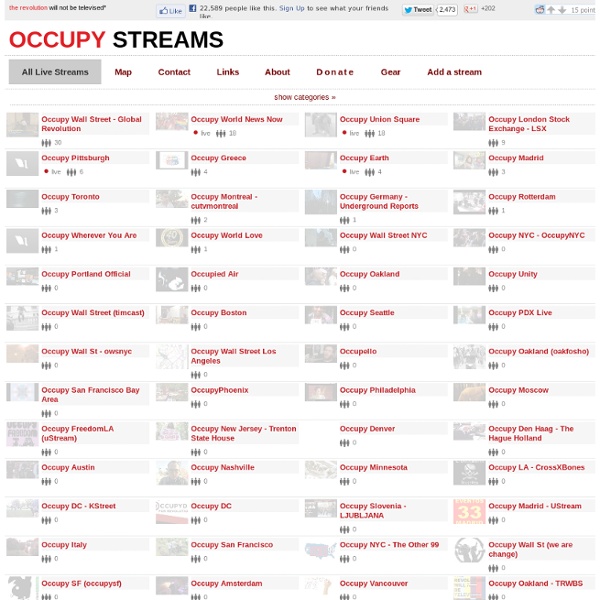 Map: Occupy Wall Street Spreads Nationwide (Updated) The loose-knit protest movement known as Occupy Wall Street has stirred action from New York City to LA and spread overseas. Here we present an expanding map of protest hot spots and reported arrests, and track the movement's growth. Check back often for updates—and check out all the rest of MoJo's #OWS coverage here. Protests taking place beyond Manhattan: What began as a call for Americans to gather in New York's Financial District has given rise to like-minded actions nationwide and far beyond. Click on the dots for details from more than 462 locations and over 3,200 arrests (last updated: November 20, 9:30 p.m.

AnonOps Communications One account. All of Google. Sign in to continue to Blogger Find my account Forgot password? Sign in with a different account Create account Free University NYC: S18-S22 To mark the one year anniversary of Occupy Wall Street, a coalition of students, educators, and community groups will host the Free University Week—creating education that is democratic, critical, and accessible to all. This event will be held in Madison Square Park from Tuesday through Friday, September 18 - 21, from 2pm to 7pm, and on Saturday, September 22, from 10am to 2pm. Participants will gather in solidarity with Occupy Wall Street’s one year anniversary, as well as with education movements in Chicago, Quebec, Chile, and beyond. Just across the street from the Free University, on Tuesday evening, the Barack Obama presidential campaign will hold a $40,000 a plate fundraiser at the 40/40 Club, hosted by Jay-Z and Beyoncé and attended by the president.

RevolutionTruth.org About This Campaign: Uprisings are occurring all over the world as people become more and more disempowered and angry. The Arab Spring ignited a fire of hope for nonviolent revolution in a lot of US citizens. Occupy Wall Street, initially ignored, ridiculed or dismissed by mainstream media outlets, has in turn helped spawn the #Occupy movement in over 500 US cities! We believe it is up to us, common people everywhere, to create sustainable and sustaining ways to live and co-exist in our world – those in power are not going to do it for us. A May Day alert for the Occupy movement So, Occupy got it together for May Day – at least, in New York City. You would never know it, though, from mainstream news: those reports were full of what I call the "erectile dysfunction" narrative, the default narrative in American new coverage of mass protest. "Why Occupy May Day Fizzled", as CNN had it: flaccid efforts, always in "drenching rain", that may be well-intentioned but have no staying power. But if you click onto the new site Occupy.com – or if you actually went to the rally held in the late afternoon in Union Square – it was a very different story: thousands of euphoric protesters, a massive sound stage, edgy hip-hop artists who had created Occupy anthems that were euphorically received by the crowd, and representation by dozens of community groups and unions in Manhattan. In other words – if built on further – a power base.

Timeline of Occupy Wall Street Protester on September 28, 2011 The following is a brief timeline of Occupy Wall Street (OWS), a protest which began on Saturday, September 17, 2011[1] on Wall Street, the financial district of New York City. Chronology of events[edit] Pre-Occupy Wall Street[edit] Free University ScheduleThe Free University of NYC During the week, September 18-21, Free University events will be held in Madison Square Park from 2:00 pm – 7:00 pm, and the schedule on Saturday, September 22, will run from 10:00 am – 2:00 pm. Please check for on-site course additions and changes to the schedule at the Info Hub at 23rd and Broadway near the Southwest corner of Madison Square Park! There are now interactive maps available for each of the five days:S18, S19, S20, S21, S22 [google-calendar-events id=”1″ type=”list-grouped” title=”” max=”1000″]

Occupy Wall Street Screenprinters Cooperative It’s our two-year anniversary and we are announcing our new nonprofit status! We are planning to launch an educational program which will bring screenprinting to classrooms citywide and beyond. Come celebrate with us and be among the first to preview our new designs for Spring 2014. We’re proud to have a lineup of special guest artists, including Molly Crabapple! Also, get this year’s new MayDay prints before the big day.