Free Simulation and Modeling in Your Browser 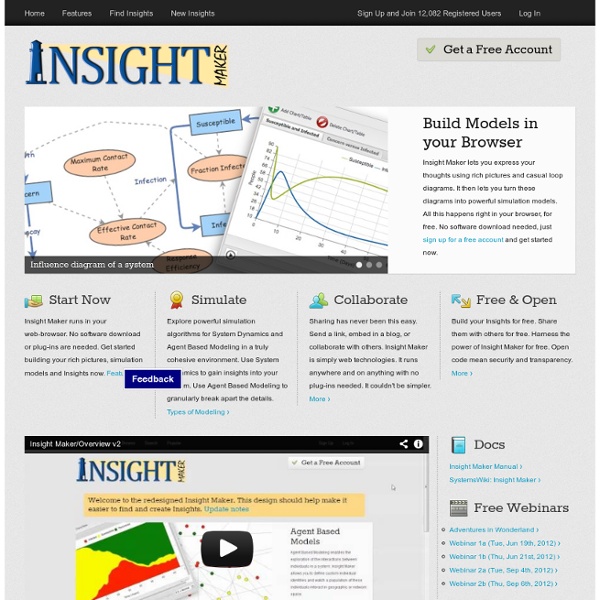 Science Writer Welcome to CAST Science Writer, the tool that supports students in writing lab and class reports. This tool is geared toward middle school and high school students. Check out the supports and help available in Science Writer described below. Or click the "Take a Tour" button above to see how Science Writer works. A Report Structure All parts of a science or lab report are broken into small steps so the author can concentrate on one part of the report at a time. A Process for Writing Science Writer helps you through the process of draft, revise, and edit when writing a science report. Sentence Starters The "Help Me Get Started" button has two functions (1) it divides the writing into smaller sections and (2) provides sentence starters when on the draft screens in the writing process. Checklists Checklists are available when you revise and edit your science report. Journal This is a place in Science Writer where you may write notes, reflect, make comments or questions, or keep track of data.

Matematicas Visuales | Home In MatematicasVisuales you will find visual expositions of mathematical concepts. MatematicasVisuales intends to complement the work initiated by artiludios, a site with games, puzzles and mathematical curiosities. Reading Miguel de Guzmán I found a demonstration of the line of Simpson and the Steiner Deltoid. It serves as an introduction to the geometry section. The concept of function and its graphical representation are a key concept and we dedicate special attention to it in the analysis section. Geometric representation of the complex numbers facilitates its visualization. Thinking in who have to start learning probability we have this section about this subject. In the history section we approach mathematics through its history. Miguel Cardil made the design of matematicasvisuales.com. The contents of MatematicasVisuales has been developed by Roberto Cardil.

Sphinx SD Tools | Free Science & Engineering software downloads PhysicsJS" by Well Caffeinated Visit Mobile Site Chrome Experiments Celebrating creative code for the web. Hey! We highly recommend you launch this experiment in Google Chrome. It may run slower, or not at all, in other browsers. Okay, I'll download Google Chrome I'm willing to risk it Back to All PhysicsJS November 29, 2013 Launch Experiment Or visit goo.gl/sSf2J8 on your phone or tablet using Google Chrome. Author: Well Caffeinated Toronto Rate Experiment (26 ratings): From the Author: A set of demos of real-time 2D physics in the browser. Technology: html, css, javascript canvas requireJS (AMD modules) Tags: Not WebGL Gravity Comments By TJ Horner on December 26, 2013 Never thought a physics engine would be possible with JavaScript. Reply to this comment By sethaporn on December 08, 2013 good By Ahmad on November 29, 2013 amazing...................!!! thank uuu for js Add a comment All fields are required to prevent spam.

Project MATHEMATICS! Making Math and Science Connections Cycloid Optical Illusion Will Boggle Your Mind Optical illusions typically prey on your mind’s ability to fill in blanks in the visual stimulus it is receiving. Sometimes this can be so strong, your mind continues to be tricked even after it has been explained. Case in point: this video from brusspup, purveyor of mind-melting illusions. The video looks like a wheel made out of eight white circles is rolling around inside of a large, red circle. That’s not what is actually happening, as the video will explain: I don’t know about you, but even after it was explained and the lines were taken away, my brain still wanted to see it as a rolling wheel. So how does this illusion actually work? The entire principle is based on cycloids; half circle shapes that are created by a fixed point on the rim of a circle. Image credit: Zorgit, via WikiMedia Commons Based off of this principle, the curved line can be represented linearly. Math is really damn cool sometimes. [Hat tip and eternal admiration to: Phil Plait, Slate]