Tools. Digital Literacy. Books/E-books. Film & Documentary. Google. IPad. Radio. RSA Animate. Useful Websites. Amazing TED talks. Online Freedom. Open & Digital Culture. Web & Devices... 20 Links to Technological Addiction. Cyberlaw 2015. 32 Amazing Websites That Will Actually Save You Money. 13 Community Role Archetypes (Which One Are You?) Decker and I had a blast putting this together – It’s a breakdown of some archetypical roles in community we’ve noticed over the years, along with the specific people in our community who fill those roles. 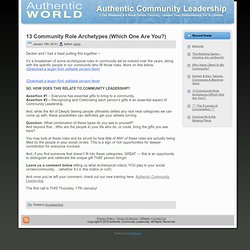 More on this below. (Download a larger-font, editable version here) (Download a larger-font, editable version here) Assertion #1 – Everyone has essential gifts to bring to a community.Assertion #2 – Recognizing and Celebrating each person’s gifts is an essential aspect of Community Leadership. And, while the Art of Deeply Seeing people ultimately defies any nice neat categories we can come up with, these possibilities can definitely get your wheels turning. Question: What combination of these types do you see in yourself? You may look at these roles and be struck by how little of ANY of these roles are actually being filled by the people in your social circles. And once you’ve left your comment, check out our new training here: Authentic Community Leadership. Patterndynamics.jpg (1024×734)

The Architecture of Participation. By Tim O'Reilly June 2004 I've come to use the term "the architecture of participation" to describe the nature of systems that are designed for user contribution. 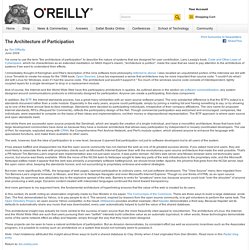 Larry Lessig's book, Code and Other Laws of Cyberspace, which he characterizes as an extended meditation on Mitch Kapor's maxim, "architecture is politics", made the case that we need to pay attention to the architecture of systems if we want to understand their effects. I immediately thought of Kernighan and Pike's description of the Unix software tools philosophy referred to above. I also recalled an unpublished portion of the interview we did with Linus Torvalds to create his essay for the 1998 book, Open Sources.

Linus too expressed a sense that architecture may be more important than source code. And of course, the Internet and the World Wide Web have this participatory architecture in spades. In addition, the IETF, the Internet standards process, has a great many similarities with an open source software project. Conceptual Framework for Online Identity Roles. I just wrapped up a final project for an aesthetics course this semester, the assignment being to create a “Database of the Self.” 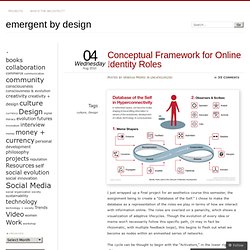 I chose to make the database as a representation of the roles we play in terms of how we interact with information online. The roles are overlaid on a panarchy, which shows a visualization of adaptive lifecycles. Though the evolution of every idea or meme won’t necessarily follow this specific path, (it may in fact be rhizomatic, with multiple feedback loops), this begins to flesh out what we become as nodes within an enmeshed series of networks.

The cycle can be thought to begin with the “Activators,” in the lower right side of image. For an interactive version of the graphic, click here. I found this to be an interesting exercise when thinking about the impact and influence we have on the web, and how information travels. Thanks to @wildcat2030 for inspiration from Friendships in Hyperconnectivity mindmap and to @gavinkeech for visual design. Like this: A Brief History of Digital Data. Artificial General Intelligence in Second Life  Virtual worlds are the golden path to achieving Artificial General Intelligence and positive Singularity, Dr Ben Goertzel’s, CEO of Novamente LLC and author of “The Hidden Pattern: A Patternist Philosophy of Mind” explained in his presentation “Artificial General Intelligence in Virtual Worlds” given at the Singularity Summit 2007 earlier this month. 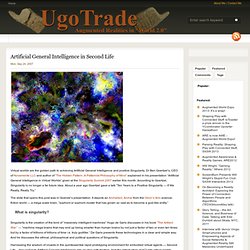 According to Goertzel, Singularity is no longer a far future idea. About a year ago Goertzel gave a talk “Ten Years to a Positive Singularity — If We Really, Really Try.” The slide that opens this post was in Goerzel’s presentation. It depicts an Archailect, Archai from the Orion’s Arm science-fiction world — a mega scale brain, “sophont or sophont cluster that has grown so vast as to become a god-like entity.” What is singularity? Harnessing the wisdom of crowds in the quintessential rapid prototyping environment for embodied virtual agents — Second Life – may well turn Artificial General Intelligence into an idea with traction. SpaceCollective.