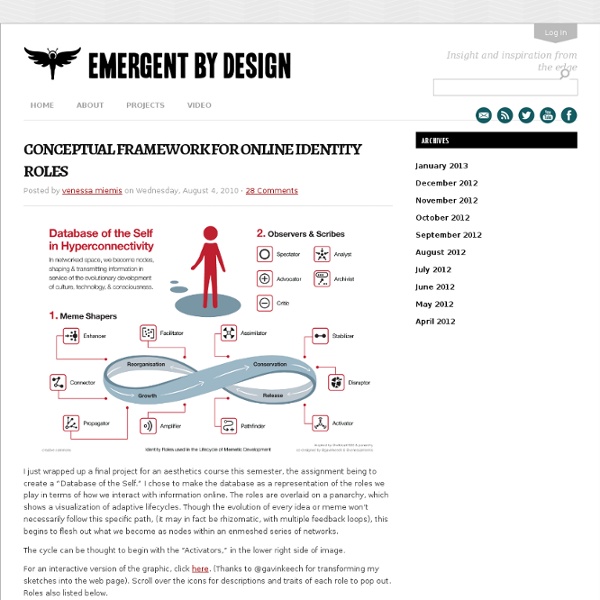 I just wrapped up a final project for an aesthetics course this semester, the assignment being to create a “Database of the Self.” I chose to make the database as a representation of the roles we play in terms of how we interact with information online. The roles are overlaid on a panarchy, which shows a visualization of adaptive lifecycles. Though the evolution of every idea or meme won’t necessarily follow this specific path, (it may in fact be rhizomatic, with multiple feedback loops), this begins to flesh out what we become as nodes within an enmeshed series of networks. The cycle can be thought to begin with the “Activators,” in the lower right side of image. For an interactive version of the graphic, click here. I found this to be an interesting exercise when thinking about the impact and influence we have on the web, and how information travels. Thanks to @wildcat2030 for inspiration from Friendships in Hyperconnectivity mindmap and to @gavinkeech for visual design. Like this: Related:  from metaphor to model... • Digital Live • jchaire

to be published in: R. Trappl (ed.) (1996): Cybernetics and Systems '96 (World Science, Singapore?)Francis Heylighen & Johan Bollen Center "Leo Apostel", Free University of Brussels, Pleinlaan 2, B-1050 Brussels Belgium email: fheyligh@vnet3.vub.ac.be, jbollen@vnet3.vub.ac.be Abstract If society is viewed as a super-organism, communication networks play the role of its brain. 1 Introduction It is a recurrent idea that the whole of humanity, the system formed by all people together with their channels of exchange, can be viewed as a single organism: the `super-being' [Turchin, 1977] or `metaman' [Stock, 1993]. Yet, there is at least one domain where integration seems to be moving full speed ahead: the development of ever more powerful communication media. In organisms, the evolution of the nervous system is characterized by a series of metasystem transitions producing subsequent levels of complexity or control [Turchin, 1977; Heylighen, 1995, 1991b]. 2 The Web as an Associative Memory

20+ Tools to Create Your Own Infographics A picture is worth a thousand words – based on this, infographics would carry hundreds of thousands of words, yet if you let a reader choose between a full-length 1000-word article and an infographic that needs a few scroll-downs, they’d probably prefer absorbing information straight from the infographic. What’s not to like? Colored charts and illustrations deliver connections better than tables and figures and as users spend time looking back and forth the full infographic, they stay on the site longer. Plus, readers who like what they see are more likely to share visual guides more than articles. While not everyone can make infographics from scratch, there are tools available on the Web that will help you create your very own infographics. Read Also: The Infographic Revolution: Where Do We Go From Here? What About Me? “What About Me?” Vizualize.me Vizualize.me allows you to create an online resume format that is beautiful, relevant and fun, all with just one click. Piktochart easel.ly

The Architecture of Participation by Tim O'Reilly June 2004 I've come to use the term "the architecture of participation" to describe the nature of systems that are designed for user contribution. Larry Lessig's book, Code and Other Laws of Cyberspace, which he characterizes as an extended meditation on Mitch Kapor's maxim, "architecture is politics", made the case that we need to pay attention to the architecture of systems if we want to understand their effects. I immediately thought of Kernighan and Pike's description of the Unix software tools philosophy referred to above. And of course, the Internet and the World Wide Web have this participatory architecture in spades. In addition, the IETF, the Internet standards process, has a great many similarities with an open source software project. The web, however, took the idea of participation to a new level, because it opened that participation not just to software developers but to all users of the system. Return to: tim.oreilly.com

A Metathinking Manifesto The significant problems we face today cannot be solved at the same level of thinking we were at when we created them. – Einstein For several years now, I’ve been studying the intersection of technology, culture and communication, the impacts of social media, the relationship between creativity, innovation and design, and the potential of various futures. I’ve had this gnawing sensation at the edges of my mind that all these areas were held together by a common thread, but I couldn’t put my finger on the connection. My intention is that by taking this out of the incubation stage in my head and putting it into words, it will become clarified and provide some value. First off, let me lay out a framework . My ideas are based on 3 main concepts: * Social media is fundamentally changing the human experience. * The world is increasing in complexity. * We are experiencing accelerating change. And a brief explanation of each: Social media is fundamentally changing the human experience. So what?

13 Community Role Archetypes (Which One Are You?) Decker and I had a blast putting this together – It’s a breakdown of some archetypical roles in community we’ve noticed over the years, along with the specific people in our community who fill those roles. More on this below. (Download a larger-font, editable version here) (Download a larger-font, editable version here) Assertion #1 – Everyone has essential gifts to bring to a community.Assertion #2 – Recognizing and Celebrating each person’s gifts is an essential aspect of Community Leadership. And, while the Art of Deeply Seeing people ultimately defies any nice neat categories we can come up with, these possibilities can definitely get your wheels turning. Question: What combination of these types do you see in yourself? You may look at these roles and be struck by how little of ANY of these roles are actually being filled by the people in your social circles. And once you’ve left your comment, check out our new training here: Authentic Community Leadership

EMERGENT CITIES - BuilderShips · ImagineNations :Arbitration Committee/Discretionary sanctions Definitions The committee is the Arbitration Committee.AE ("arbitration enforcement noticeboard") is the venue for requesting, applying, discussing and appealing most enforcement requests.AN ("administrators' noticeboard") is the alternative venue for appeals.ARCA ("Requests for Amendment") is the venue for appealing to the committee.An alert is the formal alert notice that informs editors an area of conflict is covered by discretionary sanctions.An appeal includes any request for the reconsideration, reduction, or removal of a sanction.An area of conflict is a topic or group of topics in which the use of discretionary sanctions has been authorised by the committee.An editor is anyone and everyone who may edit and has edited the encyclopedia.The enforcing administrator is the administrator who places sanctions authorised in this procedure.A sanction includes any sanction, restriction, or other remedy placed under this procedure. Authorisation Amended on 20 January 2015 Guidance for editors

The Global Brain, the Semantic Web, the Singularity and 360-2020 consciousness to create the Web of WE: socially-voiced co-creation - un knol de 刘Twain Video Introduction F irstly, thank you for your interest and I hope readers will contribute their own considered analysis and gut intuitions here intelligently, regardless of whether or not they agree with these postulations and the presentation of them. Secondly, I’m looking forward to our interactions and building upon this model together. Nevertheless, I promised a knowledge share and here it is. This post is an initiating conversation in a continuum of “negotiations of intellect” (discourse) I’m engaging in with others interested in the subject matter, as well as within myself. It is not intended to be the definitive, static or absolute end-game version, nor indeed the academic / geek version. More than anything, its aim is to increase awareness of developments related to the Global Brain beyond its tech sector and academic niche to as wide an audience as possible, in order to stimulate conversations and conducive collective actions. The Global Brain: a definition social brain

32 Amazing Websites That Will Actually Save You Money