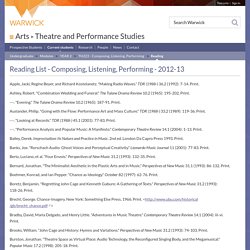 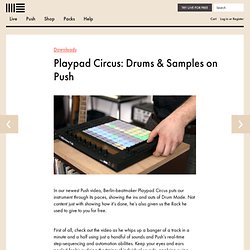 Not content just with showing how it’s done, he’s also given us the Rack he used to give to you for free. First of all, check out the video as he whips up a banger of a track in a minute and a half using just a handful of sounds and Push’s real-time step-sequencing and automation abilities. Keep your eyes and ears peeled for his nudging the timing of individual sounds, applying swing and varying velocity. They’re all instantly tweakable directly from Push, and you can see our man Playpad put them all to highly effective use here. You can also download the whole track from Playpad Circus’ Soundcloud. Watch more videos about playing in Drum Mode and other Push techniques. Video of The Dark Tourist making a track in Push. In our newest video, Berlin-based producer The Dark Tourist gets his hands on Push. 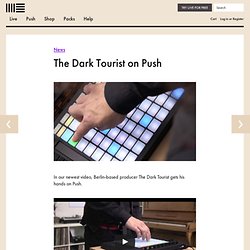 Like what you heard? That Blade Runner-ish melody was made with a custom-made Rack, based around Analog and Max for Live devices. You can download it for free (requires Live 9.1.2 Suite) and use it in your own Push composition. We’d love to hear what you come up with – so be sure to share your tracks with us using #MadeWithPush on Facebook or Twitter. Interview with Robert Henke about Lumière. One of the original developers of Ableton Live, internationally acclaimed artist and more recently, sound studies lecturer, Robert Henke has always operated at the intersection of art and technology. 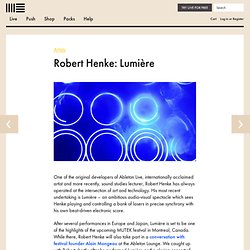 His most recent undertaking is Lumière – an ambitious audio-visual spectacle which sees Henke playing and controlling a bank of lasers in precise synchrony with his own beat-driven electronic score. After several performances in Europe and Japan, Lumière is set to be one of the highlights of the upcoming MUTEK festival in Montreal, Canada. While there, Robert Henke will also take part in a conversation with festival founder Alain Mongeau at the Ableton Lounge. Machine Love: Karenn. Techno doesn't get much rawer than it does with Karenn. 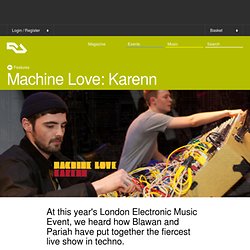 But much like a rock star's expertly crafted bed-head, a lot of care and skill goes into getting things rough around the edges. Arthur Cayzer (Pariah) and Jamie Roberts (Blawan) are both acclaimed solo producers. Before they teamed up they were known for the kind of mutated bass cuts that were everywhere at the turn of the decade. But perhaps more important than the evolution of their musical style is the way their workflow has changed: where before they were both working mostly with software, as Karenn they ditched their laptops in favor of an unruly assemblage of machines. They say they haven't looked back.

What would count as a comprehensive electronic production studio now comes on the road with them, and it's in the live space that Karenn have really set themselves apart. Resolume VJ Software - Live Digital Motion Graphics. Bandesnaci. Bandesnaci. Vladimir Coman-Popescu. Hey, dudes and dudettes! 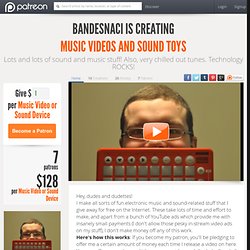 I make all sorts of fun electronic music and sound-related stuff that I give away for free on the Internet. These take lots of time and effort to make, and apart from a bunch of YouTube ads which provide me with insanely small payments (I don't allow those pesky in-stream video ads on my stuff), I don't make money off any of this work. Here's how this works: If you become my patron, you'll be pledging to offer me a certain amount of money each time I release a video on here. You can offer as much or as little as you want (every dollar helps!) And all the money you give will go to helping me create more music and sound toys to give away to people - so any money that I don't spend on food and bills goes to buying equipment and tools to get everything sounding and looking as cool as possible for your enjoyment! You can also check out Live Dubstep Controllerism and The MIDI Fighter 3D Mix. Armin van Buuren - DJ setup explained. Moderat. Filed under: Gear 07/29/2013 This is a big week for Moderat. 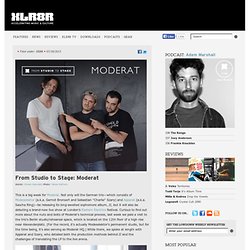 Not only will the German trio—which consists of Modeselektor (a.k.a. Gernot Bronsert and Sebastian "Charlie" Szary) and Apparat (a.k.a. Sascha Ring)—be releasing its long-awaited sophomore album, II, but it will also be debuting a brand-new live show at London's Eastern Electrics festival. Curious to find out more about the nuts and bolts of Moderat's technical process, last week we paid a visit to the trio's Berlin studio/rehearsal space, which is located on the 12th floor of a high rise near Alexanderplatz.

XLR8R: Tell us about the recording process for the new album. Apparat: The last time, when we made the first record, it was pretty much based on old ideas from all of us. Sebastian "Charlie" Szary: We set up the [studio] every week in a new constellation... When you guys would assemble these eight-bar loops, would it be a drum pattern?