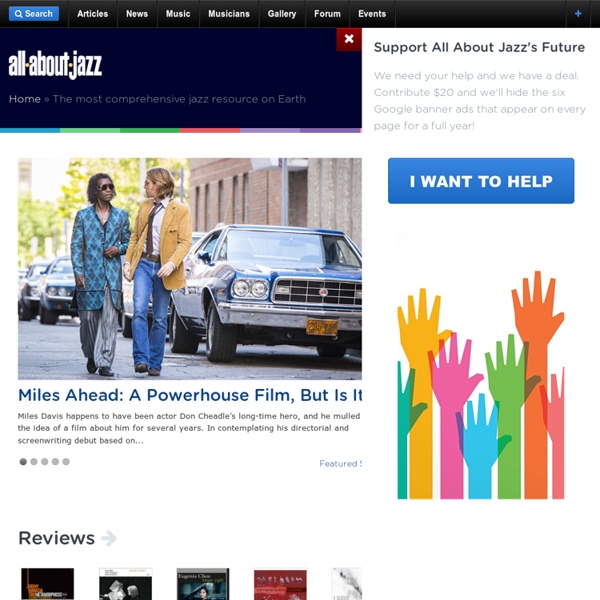 Chano Pozo Born 1/7/1915, killed in a bar room fight in Harlem 12/2/48. Played with Charlie Parker, Dizzy Gillespie, Chico O'Farrill, Carlos "Patato" Valdes, Miguelito Valdez, and many others as well. He got his start after moving to New York in 1947 when Mario Bauza got him to play with Dizzy Gillespie, an event that changed the course of American Jazz. Chano Pozo thereby played a major role in the founding of Latin-jazz which was essentially a mixture of bebop and Cuban folk music. He gained his musical background from AfroCuban religions. Among his features with Dizzy were "Cubana Be," "Cubana Bop," "Tin Tin Deo" and "Manteca" which was later a big hit with Eddie Palmieri and Cal Tjader.

Thelonious Monk Quartet with John Coltrane at Carnegie Hall - Wi At Carnegie Hall is a live album by The Thelonious Monk Quartet with John Coltrane. Album information[edit] It was recorded on 29 November 1957 at "Thanksgiving Jazz", a benefit concert produced by Kenneth Lee Karpe for the Morningside Community Center in Harlem. Other acts performing included: Billie Holiday, Dizzy Gillespie, Ray Charles, Sonny Rollins, and Chet Baker with Zoot Sims. The recording, by Voice of America, documents two sets by the Monk Quartet with Coltrane that night – an early set (tracks 1-5) and a late set (tracks 6-9), which the recording does not fully document.

15 Most Influential Jazz Artists The Arts As one of the most well respected American art forms, jazz has shaped the music industry spawning both the careers of various musical geniuses, and an abundance of elemental new music genres. Jazz was developed in the late 19th century and early 20th century as American and European classical music was mixed with African and slave folk songs.

A Brief History of Latin Jazz By Carlos Quintana In general terms, Latin Jazz is a musical label defined by the combination of Jazz with Latin music rhythms. Brazilian Jazz, a style that emerged from the sounds of Bossa Nova thanks to artists like Antonio Carlos Jobim and Joao Gilberto, fits this general concept. Travellin' Light Travellin’ Light Steve Swell Answers 20 Questions About Life on the Road Steve Swell Courtesy of Steve Swell A mainstay of the NYC jazz scene since the late 1970s, trombonist Steve Swell has performed with everyone from Lionel Hampton and Buddy Rich to Anthony Braxton and Bill Dixon.

The Beatles All-New Editions of The Beatles 1 Pair Beautifully Restored Promotional Films and Videos with Brand New Stereo and Surround Audio Mixes Beatles 1+ Deluxe Edition Celebrates the Sight & Sound of The Beatles in 50 Films & Videos London – September 15, 2015After The Beatles stopped touring, and because travelling around the globe to promote new releases was impossible, the band increasingly made what could be described as “mini movies”. These pioneering promotional films and videos helped to define the way we have come to watch music, not least because The Beatles approached filming with the same ease and innovative spirit they brought to the recording studio, exploring new creative possibilities with infectious delight. Showcasing the band’s filmed work to accompany their 27 No.1, U.K. and U.S. singles, The Beatles 1 is newly restored and expanded in multiple configurations for global release on November 6 by Apple Corps Ltd/UMG.

Oscar Peterson Oscar Emmanuel Peterson, CC, CQ, OOnt (August 15, 1925 – December 23, 2007) was a Canadian jazz pianist and composer. He was called the "Maharaja of the keyboard" by Duke Ellington, but simply "O.P." by his friends.[1][2] He released over 200 recordings, won eight Grammy Awards, and received numerous other awards and honours. He is considered to have been one of the greatest jazz pianists,[3] having played thousands of live concerts to audiences worldwide in a career lasting more than 60 years. Biography[edit] Peterson was born to immigrants from the West Indies; his father worked as a porter for Canadian Pacific Railway.[4] Peterson grew up in the neighbourhood of Little Burgundy in Montreal, Quebec.

Abakuá - Abakwa Abakuá members derive their culture from the Efik and Efo of the Cross River region in Nigeria, which Cubans call Carabali. They are organized in a set of over 150 potencias (lodges) located mainly in Havana, Matanzas, and Cardenas. The people of Big Qua Town in Calabar, the capital of Cross River State, Nigeria, are known as the Abakpa, the likely source for the name Abakuá. Big Qua Town is the home of the president of the Calabar Mgbe or Ékpè.

Leon Thomas - Spirits Known and Unknown (1969) Leon Thomas' debut solo recording after his tenure with Pharoah Sanders is a fine one. Teaming with a cast of musicians that includes bassist Cecil McBee, flutist James Spaulding, Roy Haynes, Lonnie Liston Smith, Richard Davis, and Sanders (listed here as "Little Rock"), etc. Thomas' patented yodel is in fine shape here, displayed alongside his singular lyric style and scat singing trademark. The set begins with a shorter, more lyrical version of Thomas' signature tune "The Creator Has a Master Plan," with the lyric riding easy and smooth alongside the yodel, which bubbles up only in the refrains. It's a different story on his own "One," with Davis' piano leading the charge and Spaulding blowing through the center of the track, Thomas alternates scatting and his moaning, yodeling, howling, across the lyrics, through them under them and in spite of them.