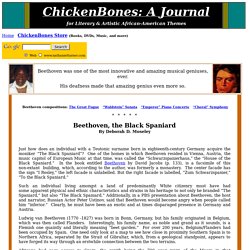 Moseley Just how does an individual with a Teutonic surname born in eighteenth-century Germany acquire the moniker “The Black Spaniard”? One of the homes in which Beethoven resided in Vienna, Austria, the music capitol of European Music at that time, was called the “Schwarzspanierhaus,” the “House of the Black Spaniard.” Such an individual living amongst a land of predominantly White citizenry must have had some apparent physical and ethnic characteristics and strains in his heritage to not only be branded “The Spaniard,” but also “The Black Spaniard.” Ludwig van Beethoven (1770 -1827) was born in Bonn, Germany, but his family originated in Belgium, which was then called Flanders. Africans had easy access to Spain, the zenith being the 700 year reign of the Moors in that country. He gave inspiration to Liszt, Schumann, and Chopin. 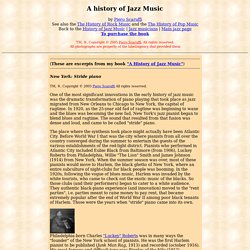 Birth of the Uncool: Don Cheadle's Miles Davis Biopic 'Miles Ahead' Quick: Name an adjective you associate with Miles Davis. 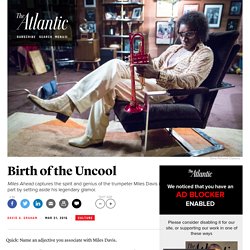 You picked “cool,” right? Even in settings where the late trumpeter’s music is far out of mind, he pops up as a symbol of cool: Gap ads. Indie-rock songs. Adam Sandler vehicles. Davis’s iconic coolness and his status as the most famous star in his genre make him a tempting subject for filmmakers—perhaps the most tempting, though not the first jazz musician to get the treatment. Miles Davis - The Doo Bop Song. Carlos Henriquez and The Wynton Marsalis Quintet. WYNTON MARSALIS: Up Close and Personal (Live from The House of Tribes - 2003) 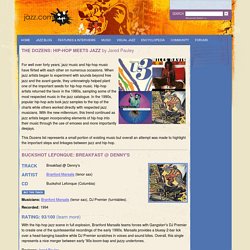 When jazz artists began to experiment with sounds beyond free jazz and the avant-garde, they unknowingly helped plant one of the important seeds for hip-hop music. Hip-hop artists returned the favor in the 1980s, sampling some of the most respected music in the jazz catalogue. 5 Great Songs Where Jazz Meets Hip Hop. Soul Square - That Swing. These Millennials Are Shaking Up the Jazz World.

If the array of fresh faces in these images surprises you, well, it shouldn’t. 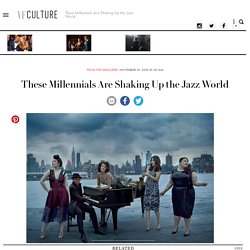 Jazz has always been a young person’s game. JAZZ A film by Ken Burns. The Jazz 100. Jazzinamerica. 15 Most Influential Jazz Artists. The Arts As one of the most well respected American art forms, jazz has shaped the music industry spawning both the careers of various musical geniuses, and an abundance of elemental new music genres. 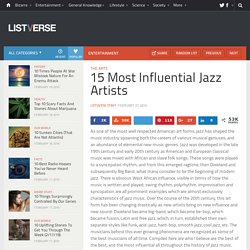 Jazz was developed in the late 19th century and early 20th century as American and European classical music was mixed with African and slave folk songs. These songs were played to a syncopated rhythm, and from this emerged ragtime, then Dixieland and subsequently Big Band, what many consider to be the beginning of modern jazz. Morton, Jelly Roll - Stars and Stripes Forever — Бесплатно Скачать MP3 Песню в 320 kbps # freeMP3now. Jorge Ben Africa Brasil 1976. TuneIn: Listen to Online Radio, Music and Talk Stations. PAUL IN RIO RADIOS AND TV - 100% BRAZILIAN MUSIC. The Jazz of The City. Home. America's Jazz and Blues Station.

Drumming Can Largely Improve Your Mental Health, Science Says. Drums are more than just an instrument. 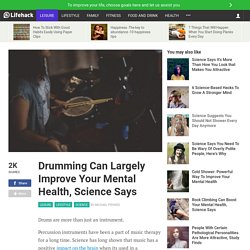 Percussion instruments have been a part of music therapy for a long time. Science has long shown that music has a positive impact on the brain when its used in a therapeutic manner. In particular, drumming is great because it allows you to do something fun while firing up several important areas of the brain. Here are a few ways that drumming can improve your mental health: It Helps You Get More In Touch With Yourself Playing the drums can help you get more in touch with yourself. One study showed that transmitting rhythmic energy to your brain allows both cerebral hemispheres to sync up. In addition to your two hemispheres, drumming allows syncs up the frontal area and lower of the brain. 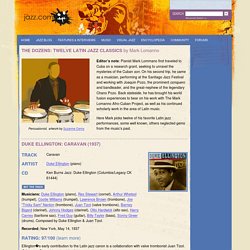 On his second trip, he came as a musician, performing at the Santiago Jazz Festival and working with Joaquin Pozo, the prominent conquero and bandleader, and the great-nephew of the legendary Chano Pozo. Back stateside, he has brought his world fusion experiences to bear on his work with The Mark Lomanno Afro-Cuban Project, as well as his continued scholarly work in the area of Latin music. Here Mark picks twelve of his favorite Latin jazz performances, some well known, others neglected gems from the music’s past. Duke Ellington: Caravan (1937) Jazz Music– Jazz Artists– Jazz News. A Brief History of Latin Jazz. By Carlos Quintana. 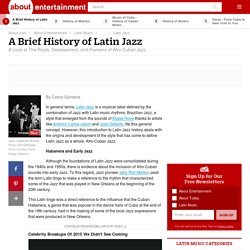 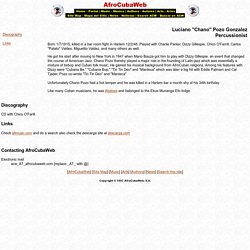 Played with Charlie Parker, Dizzy Gillespie, Chico O'Farrill, Carlos "Patato" Valdes, Miguelito Valdez, and many others as well. He got his start after moving to New York in 1947 when Mario Bauza got him to play with Dizzy Gillespie, an event that changed the course of American Jazz. Chano Pozo thereby played a major role in the founding of Latin-jazz which was essentially a mixture of bebop and Cuban folk music.

He gained his musical background from AfroCuban religions. Among his features with Dizzy were "Cubana Be," "Cubana Bop," "Tin Tin Deo" and "Manteca" which was later a big hit with Eddie Palmieri and Cal Tjader. Unfortunately Chano Pozo had a hot temper and he was killed in a Harlem bar a month shy of his 34th birthday Like many Cuban musicians, he was Abakwa and belonged to the Ekue Munanga Efo lodge. All About Jazz. Abakuá - Abakwa. Abakuá members derive their culture from the Efik and Efo of the Cross River region in Nigeria, which Cubans call Carabali. They are organized in a set of over 150 potencias (lodges) located mainly in Havana, Matanzas, and Cardenas.

The people of Big Qua Town in Calabar, the capital of Cross River State, Nigeria, are known as the Abakpa, the likely source for the name Abakuá. Democratic Republic of the Congo. Coordinates: The Democratic Republic of the Congo (/ˈkɒŋɡoʊ/; French pronunciation: ​[kɔ̃ɡo]; French: République démocratique du Congo), also known as DR Congo, DRC, DROC, Congo-Kinshasa, or simply the Congo[6][7] is a country located in Central Africa.

From 1965 to 1997 it was named Zaire. Afro-Brazilians. Afro-Brazilians (Portuguese: afro-brasileiros); Portuguese pronunciation: [ˈafɾu bɾɐziˈle(j)ɾuz] is a term used in the 21st century by some in Brazil to refer to Brazilian people with African ancestry. The term does not have widespread use in Brazil, where social constructs and classifications have been based on appearance. People with noticeable African features and skin color are generally referred to (and they identify) as negro or "preto" ("black"). Haitians. Haitians (French: haïtiens, Haitian creole: ayisyen) are the inhabitants and citizens of Haiti. A Haitian can be also a person born abroad to a Haitian parent or a foreigner living in Haiti who acquired Haitian citizenship.

Definitions[edit] According to the Constitution of Haiti, a Haitian citizen is: Anyone, regardless of where they are born, is considered Haitian if either their mother or father is a native-born citizen of Haiti. (A person born in Haiti does not automatically receive citizenship).A foreigner living in Haiti who has had a continuous period of Haitian residence for five years can apply for citizenship and will have the right to vote, but is not eligible to hold public office until five years after their date of naturalization, excluding those offices reserved for native-born Haitians by Constitutional law.

Dual citizenship[edit] Ethnic groups[edit] Languages[edit] Mauritian of African origin. Mauritian of African origin, also known as Creole, are Mauritian people whose ancestors are from African countries, mainly from Madagascar and Mozambique. Origins[edit] Brought in as slaves to work the plantations of Mauritius (as well as Réunion and Seychelles), the slaves were Africans mostly brought from East African Mozambique, Malawi, Tanzania, Madagascar and Zambia with smaller numbers from West Africa. Saro (Nigeria) Sierra Leone Creole people. The Sierra Leone Creole people (or Krio people) are an ethnic group in Sierra Leone. They are the descendants of freed African American, West Indian and Liberated African slaves who settled in the Western Area of Sierra Leone between 1787 and about 1885.

The colony was established by the British, supported by abolitionists, under the Sierra Leone Company as a place for freedmen. Miskito people. The Miskito are a Native American ethnic group in Central America, of whom many are mixed race. Black Seminoles. Garifuna people. Afro-Nicaraguan. Afro-Panamanian. Afro-Belizean. The Djembe Guide Website : About the book. About the Djembe Guide The Djembe Guide is a resource book for anyone involved with the djembe, from novice players to the leaders and members of intermediate level groups.The Djembe Guide assumes no prior knowledge of the djembe, or of music, but guides the reader carefully on a deliberate course of learning, from the first steps and simple exercises, through easy patterns for small groups, and on to playing genuine West African multi-part rhythms in a drumming ensemble.

Rhythms and exercises are presented in a clear, easy to understand system, developed specifically for this book, combining elements of oral tradition and simple tableture, so you don't have to read musical score. It includes chapters on the background to this fascinating drum, and it's recent rise to popularity outside the homelands of West Africa, and gives advice on finding, tuning and maintaining a drum of your own.