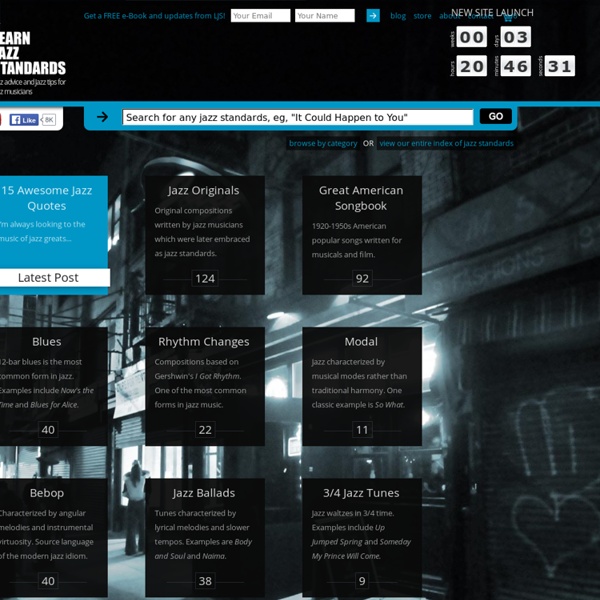 Benny Green “Source” Click above to purchase Benny Green’s 2011 release of... album of the week Jazz Originals Original compositions written by jazz musicians which were later embraced as jazz standards. 115 Great American Songbook 1920-1950s American popular songs written for musicals and film. 78 Blues 12-bar blues is the most common form in jazz. Examples include Now's the Time and Blues for Alice. 37 Rhythm Changes Compositions based on Gershwin's I Got Rhythm.

Chord sequencer-backing tracks creator-auto accompaniment- chord progressions generator-backing tracks maker 100 BPM IIm7 V7 Imaj7 VIm7 Here is a simple backing track with one of the most common chord progressions.(see picture) Try using C major scale but targeting the chord tones as harmony changes. Also try using only chord notes (arpeggios) over chords. 20 Albums To Begin A Journey into Jazz This is for you if you want to a journey into listening to jazz more seriously, or if a friend asks you what jazz records they should listen to in order to appreciate it more fully. It's no good people starting to listen to jazz on the margins; it's like giving a ten year old, Tolstoy's 'War & Peace' to read, chances are they will not make it past the first page. There are some jazz fans that can be awfully snooty about the music they love, they almost try to turn it into a club that refuses to let in new members. So we decided to put together a list of the 20 albums to start your collection with. Every one is a brilliant record and no discerning jazz fan would turn their nose up at any one of them. So our list is both credible and accessible.

200 chord progressions in C We've spent two full months of this blog exploring the basics of chord writing in rock music so you can create your own chord progressions (or chord phrases, as I like to call them). Personally, I love this stuff! There are so many hidden symmetries to discover, so many subtle relationships between notes that you can play with. But... Is jazz entering a new golden age? If you think you’ve seen more attention devoted to jazz in the past year or so, you’re not wrong. Thanks in part to a spotlight aimed by Kendrick Lamar – whose album To Pimp a Butterfly prominently featured contemporary names like pianist Robert Glasper and saxophonist Kamasi Washington – there’s been an overall renaissance in press coverage for a genre that has, in recent decades, often seemed ignored by the popular media. Jazz’s resurgent profile, however, isn’t merely due to one rapper’s significant influence. Lamar-associate Washington has received a large amount of the recent attention mostly on the strength of the saxophonist’s 2015 triple album, The Epic.

The Top 10 Best Guitar Websites On The Web Love guitars? Of course you do! So find out which are the ten best web sites for guitar fanatics...if you're into guitars, you must know those websites! Besides the usual features you'd expect from a manufacturer website, with great pics and info about their guitars, what truly makes www.gibson.com truly special is their news-lifestyle section. You don't need to own - or even particularly be a fan of - Gibson guitars to fully enjoy it: artists features, guitar lessons, interesting articles and excellent tone tips, usually by Dave Hunter, make the official Gibson.com a site you simply must visit if you love guitars! This website is not exclusively about guitars, and is generally a great place for anyone interested in any sort of musical gear info: tons of resources including news, reviews and forums about guitars, drums & percussion, software and much more.

The 2018 NPR Music Jazz Critics Poll Below are the results of NPR Music's 6th Annual Jazz Critics Poll (my 13th annual, going back to its beginnings in the Village Voice). Wayne Shorter's Emanon was voted Album of the Year, and Cecile McLorin Salvant's The Window Best Vocal. Shorter and Salvant have won these categories previously (thrice in Salvant's case), and Both Directions at Once: The Lost Album marks the second victory in Rara Avis (a catch-all term for reissues, vault discoveries, and the like) for John Coltrane. David Virelles's Igbó Alákorin (The Singer's Grove): Vol. I & II won Best Latin Jazz and Justin Brown's Nyeusi was Best Debut.